No, president Akufo-Addo didn’t say Ghana ‘must learn from mistakes of Nigeria’

“We must learn from the mistakes of Nigeria, and never in our entire history be ever so foolish,” reads a screenshot circulating on Facebook in April 2021. The words are attributed to Nana Akufo-Addo, the president of Ghana. A photo of him appears beneath the quote.

“You cannot declare war on your country and still be enjoying federal allocation as a state except in complicity with the government,” it continues.

“The Nigerian government is an ethnic government, not a nationalistic government. What I cannot understand is why Nigerians themselves are not angry enough to change the situation.”

The quote seems to have been on Facebook since at least August 2020.

This is harsh criticism of one country by another’s leader. But did Akufo-Addo really publicly say it? 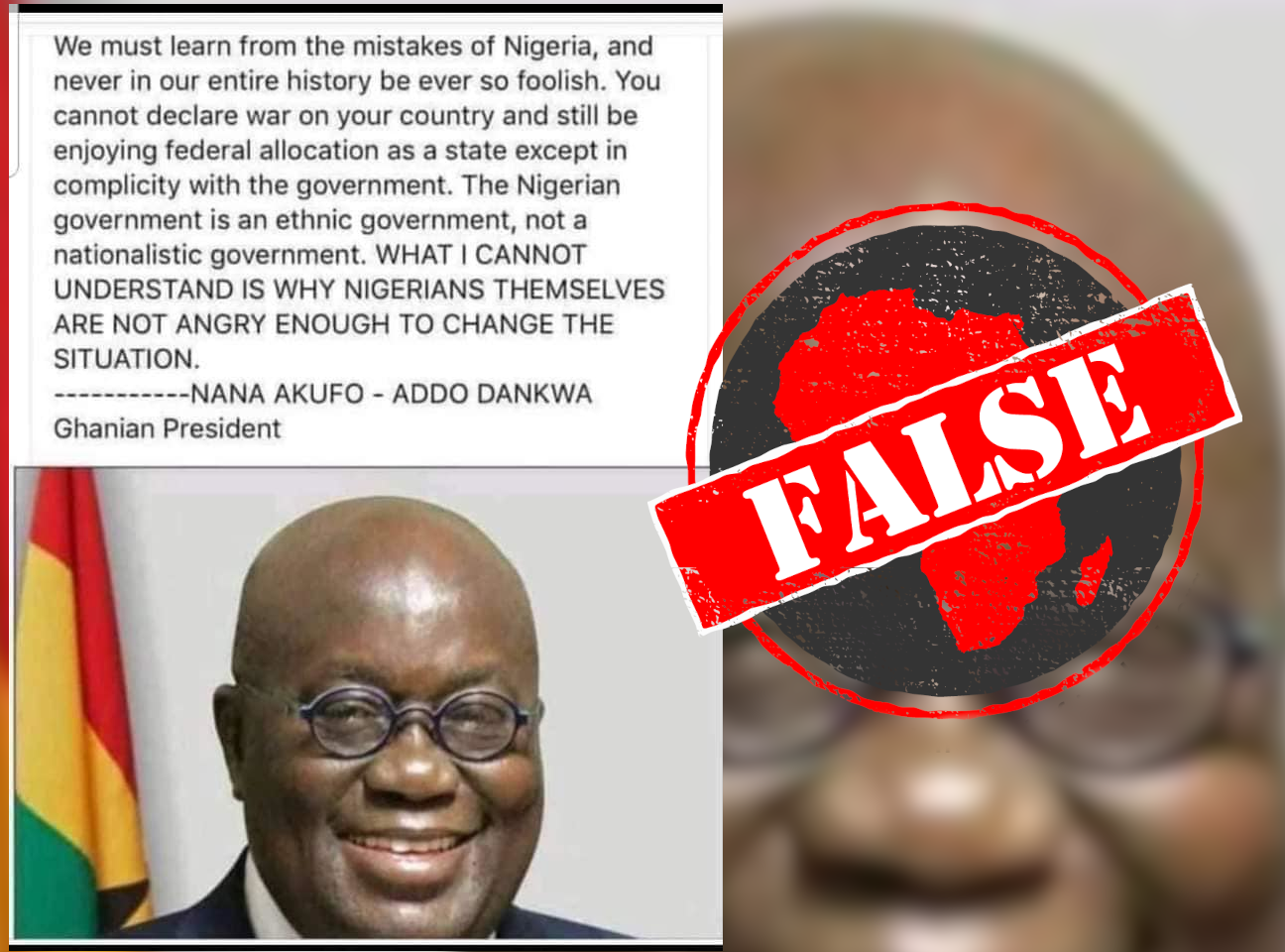 ‘President holds brotherhood of Ghana and Nigeria in highest regard’

Africa Check messaged two of the Facebook users who posted earlier versions of the quote, to ask them for its source. Neither has responded.

Such outspoken criticism of Nigeria by Akufo-Addo would have been widely reported in the media. We could find no news reports of it.

And we searched Akufo-Addo’s posts on his verified Facebook, Twitter and Instagram accounts from August 2020 to April 2021, and could not find the quote in any of them.

The paper reports that an unnamed official in the Ghana High Commission Nigeria, in Abuja, “said the comments trending on social media were nothing but fake news”.

It quotes the official as saying: “There is no occasion either in private or public where President Akufo Addo attacked the good people of Nigeria. Mr President holds the brotherhood of Ghana and Nigeria in the highest regard.

“The said statement is the handwork of enemies of the two brotherly countries whose desire is to continue to see unnecessary tension among the good people of the two countries.”

Africa Check has reached out to the Ghana High Commission to ask about the quote, but they have not yet responded. We will update this report if they do.

There is no evidence that the quote is by Akufo-Addo. It is false.