“JUST IN: Eminem’s NFT turned out to be FAKE” begins a widely shared tweet about the rapper Marshall Mathers, better known by the stage name Eminem.

The tweet, which has also been shared tens of thousands of times as a screenshot on Facebook, includes a photo of the musician and a cartoon image of a yawning ape.

The image is associated with a non-fungible token or NFT, a kind of certificate of ownership used to trade things like digital images, which can otherwise be infinitely copied. (We explain this in more detail below.)

Mathers did reportedly buy this particular NFT for the equivalent of US$462,000 on 31 December 2021. But did all that money actually pay for a fake? 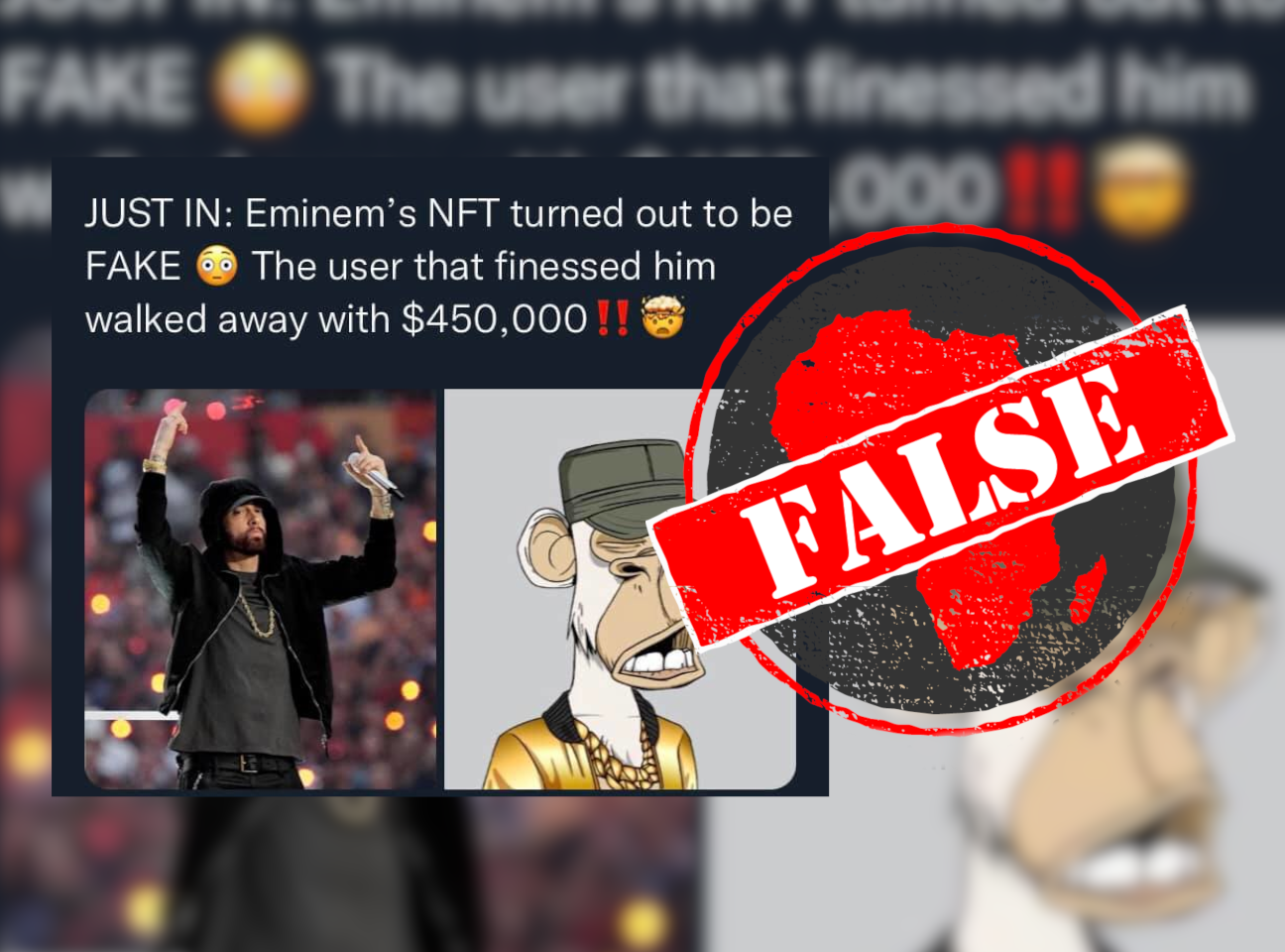 A physical painting, like the Mona Lisa by Leonardo da Vinci, is unique. Only one copy of the painting exists. A digital image, on the other hand, can be copied infinitely, with no fundamental difference between any of the copies.

So while a person can own the Mona Lisa, there is no single copy of the Africa Check logo at the top of this page, for example. It even needs to be copied and downloaded by every web browser which displays this page.

NFTs are a way to trade digital images, including videos and tweets. They take the form of an entry on a digital ledger called a blockchain.

This ledger can be used to record that a particular person officially owns a digital image, no matter how many copies exist. The ledger can also record the transfer of ownership between people, making it possible to buy and sell NFTs.

Nothing Shady about Eminem’s bored ape

The Bored Ape Yacht Club is a collection of 10,000 NFTs, all cartoon images of apes with varied clothing and facial expressions. The collection has attracted plenty of attention.

Mathers purchased bored ape #9055 through Six, an agency which has managed several cryptocurrency and blockchain-related projects. Georgio Constantinou, artist manager at Six, tweeted on 31 December 2022 that the company had helped Mathers “secure the EminApe”.

The previous owner of the NFT, who goes by “Gee__Gazza” online, also tweeted: “I sold @Eminem his @BoredApeYC”.

The blockchain on which bored ape NFTs are listed is publicly visible, so anyone can look up all previous trades. NFT marketplace OpenSea makes it easy to verify that bored ape #9055 is officially from the Bored Ape Yacht Club collection. It was purchased in July 2021 by an account named “Gee_Gazza” and later bought by Six, who transferred it to another account, presumably belonging to Mathers. But it’s sometimes unclear whether celebrities have actual access to accounts used to buy NFTs in their names.

The NFT was not transferred to the OpenSea account Shady_Holdings which media outlets have associated with Mathers. Instead, Shady_Holdings seems to have created a duplicate, which has all the same properties as the original but is not officially a bored ape original.

But it probably wasn’t confusion that led to the false claim.

The fake account uses a nearly identical header and profile picture to the real Rap TV account, but it does identify itself as a parody in its Twitter bio as parody accounts are required to.

The Rap TV parody has not shared why it made this false claim and regularly tweets absurd claims.

Gee__Gazza tweeted that the false information was being shared by “fucking idiots”.

In the screenshot shared on Facebook all identifying information was cropped out. So you can’t trace the post to the fake Rap TV account and know that it shouldn’t be taken seriously.

This is a good reminder to always check official news sources and verify the source of a claim before sharing it. It is easy for important information to be missed or even cropped out of a claim.

Eminem didn’t pay hundreds of thousands of dollars for a fake NFT. The bored ape image he bought was authentic.