Isuzu East Africa has repossessed a bus Kenyan deputy president William Ruto donated to a school because of delayed payment, according to a letter posted on Facebook on 17 March 2021.

It’s headed: “COMPANY STATEMENT ON REPOSSESSION OF THE SCHOOL BUS MEANT FOR DONATION BY DP RUTO IN TIGANIA, MERU COUNTY.”

“Attention has been drawn to a school bus that was repossessed back to the showroom after delayed payment that in accordance to our clauses, was executed fairly,” it reads in part. “Our organization is not in any way meddling in DP Ruto's political advances but simply executing the repossession as per the repossession seizure of goods or chattels.”

A screenshot of a popular blogger’s now-deleted tweet on the “bus exposé” has also been posted on Facebook. It reads: “Isuzu Kenya now says Deputy President William Ruto donated a bus he never PAID for, and ACTUALLY REFUSED to pay after Isuzu contacted and gave him 7days to pay. That's his modus operandi. Remember his promises in 2017? Remember his promises for 2022 if you elect him!”

The letter emerged the day after Nairobi News reported that a bus Ruto handed over to a school in Meru county in early March had been repossessed, fuelling speculation that the donation was just a political gimmick.

Is the letter legit? And was a bus that Ruto donated to a school repossessed? We checked. 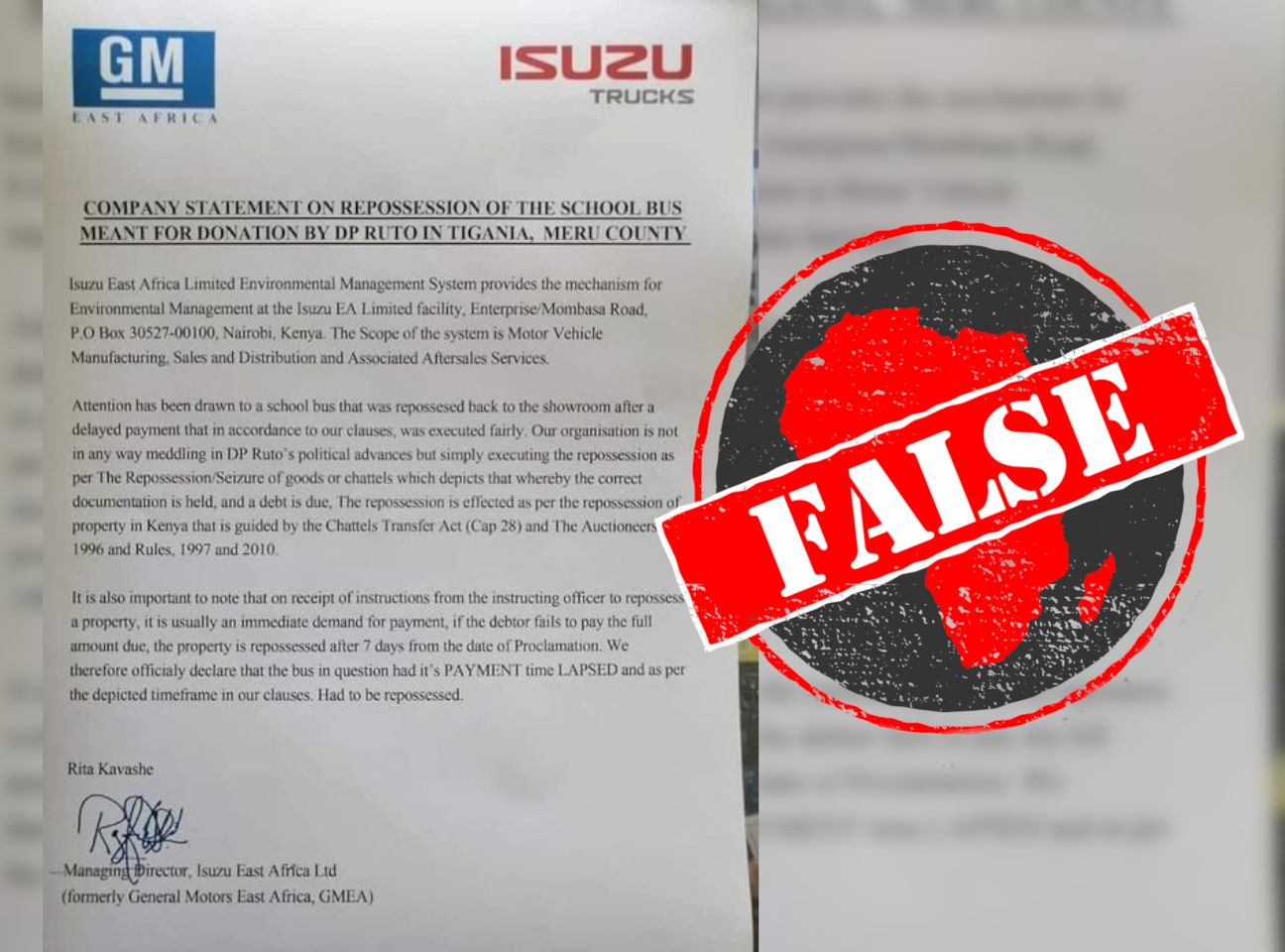 Bus to be delivered ‘next week’

The letter has several grammatical errors, improbable for such a reputable company. It also has no date.

When Ruto posted on Facebook about handing over the bus on 6 March, he said it was financed by the government’s Tigania West Constituency Development Fund. He did not say it was a personal donation.

“Our attention has been drawn to a letter circulating on social media purportedly from Isuzu East Africa alleging that a bus donated to a school in Tigania West has been repossessed by our company,” it wrote. “We wish to set the record straight and confirm that this is not correct.”

In a statement released a few hours later, the company said: “We have noted that the letter's misleading contents also appeared in a story published online by one of the leading daily newspapers.”

The statement explained that payment for the 46-seater bus was completed in December 2020. “We expect to make delivery of the bus to the school next week.”