“I’m here with a reminder that your current president was an award winning policeman during apartheid,” reads a screenshot going viral on South African social media since May 2022.

It includes an old undated newspaper article with the headline: “Cyril becomes weekend warrior in Fairland.”

The article shows a photo of Cyril Ramaphosa, today South Africa’s president, holding a trophy and standing next to another man, holding a plaque.

South Africa’s racist and violent system of apartheid lasted from 1948 to 1994, although many of its laws and policies came from earlier centuries of colonialism.

The police, including black officers, were essential to apartheid rule. As criminologist Janine Rauch puts it: “The job of the police under apartheid was to enforce laws of racial segregation, to secure the minority government, and to protect the white population from crime and political disruption. This ... allowed large-scale abuses of powers.”

Ramaphosa’s party, today the ruling African National Congress (ANC), was one of the movements that fought apartheid.

But was the current president really “an award winning policeman during apartheid”?

No. The screenshot’s claim is false. 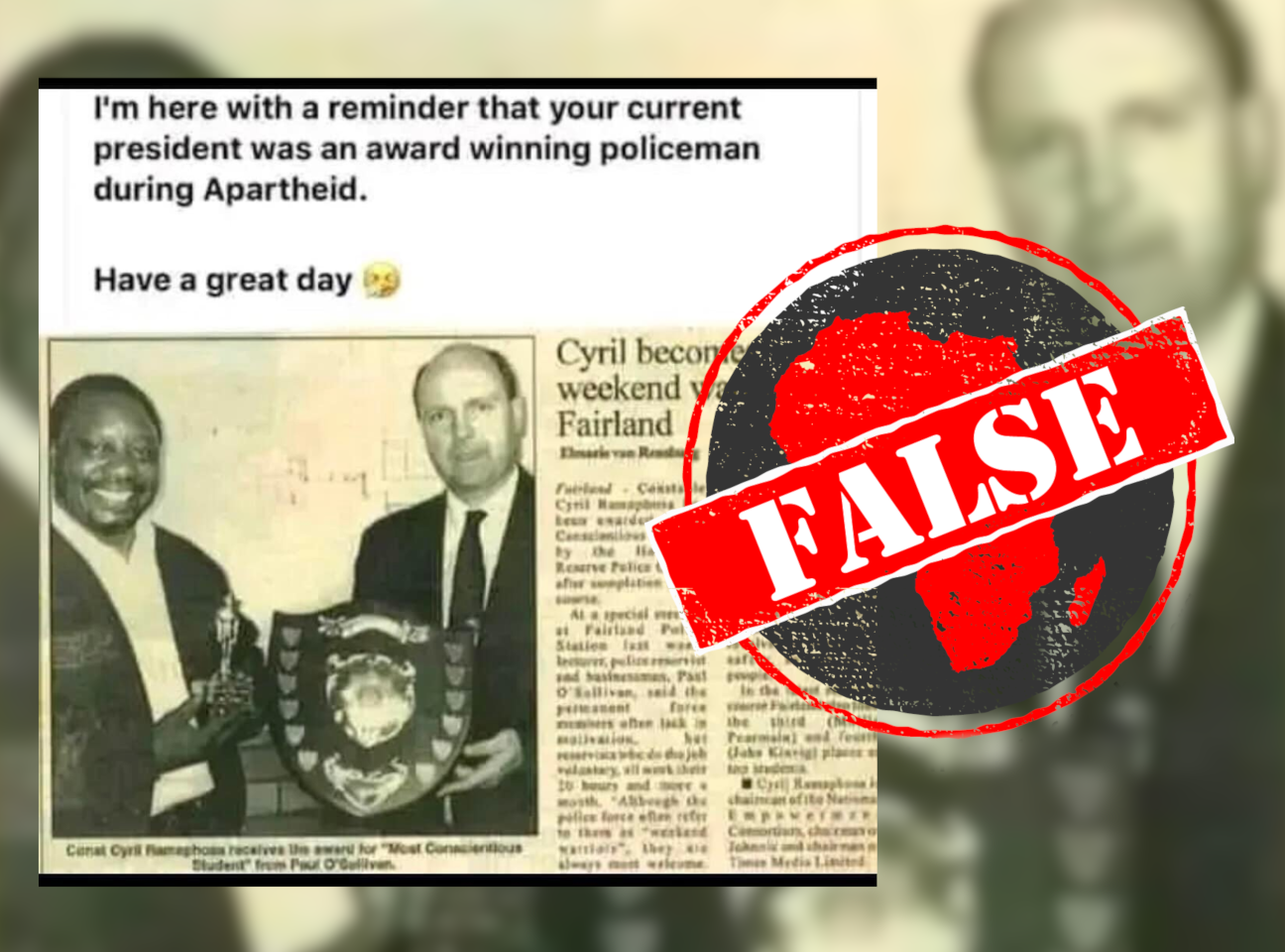 ‘Most conscientious student’ in Joburg course

The article in the screenshot is blurry and unreadable.

But a Google reverse image search led us to a clearer copy, published on BizNews in 2017 in a piece discussing crime in South Africa.

The more legible – but still undated – version reads: “Constable Cyril Ramaphosa has been awarded ‘Most Conscientious Student’ by the Houghton Reserve Police College after completion of his course.” 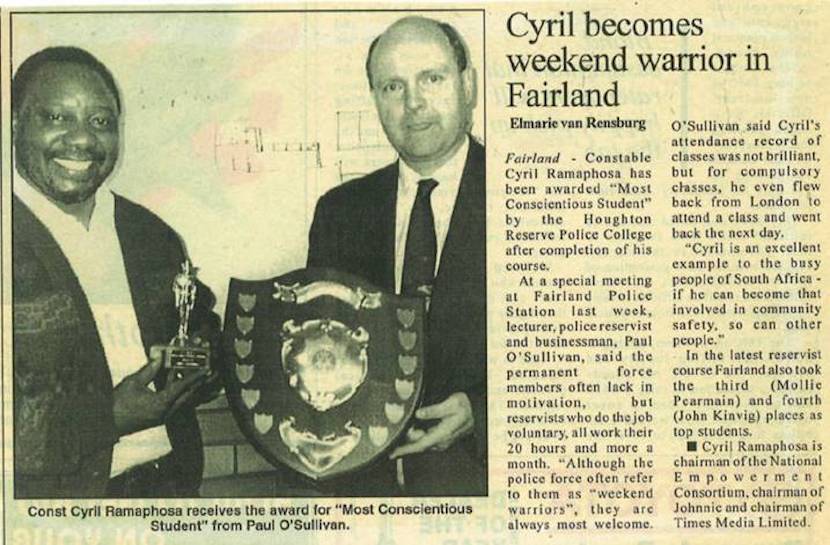 The article identifies the other man in the photo as “lecturer, police reservist and businessman” Paul O’Sullivan, who trained Ramaphosa in the reservist course.

It quotes O’Sullivan as saying Ramaphosa was “an excellent example to the busy people of South Africa. If he can become that involved in community safety, so can other people.”

The article’s final paragraph reads: “Cyril Ramaphosa is chairman of the National Empowerment Consortium, chairman of Johnnic and chairman of Times Media Limited.”

The dismantling of apartheid began in 1990, when resistance movements such as the ANC were unbanned and political prisoners freed. South Africa eventually held its first democratic elections in 1994.

Ramaphosa was the ANC’s secretary-general from 1991 to 1997. But in 1997, he resigned from the ANC to pursue business interests. These included positions at the National Empowerment Consortium, Johnnic and Times Media.

This means the undated article was published some time during or after 1997, seven years after the ANC was unbanned in 1990 and three years after the formal end of apartheid in 1994.

During apartheid, his most significant role was as head of the National Union of Mineworkers, which used strikes and bargaining to put pressure on the state.

The false claim that Ramaphosa was an “apartheid police officer” isn’t new. It’s been circulating online at least since the 2017 BizNews article. Some social media posts have even claimed he was a collaborator with the notorious security branch of the apartheid police.

South Africa’s current president did complete a volunteer police reservist course, as a gesture of involvement in the fight against crime, some time in the late 1990s.

But that was long after the end of apartheid.