A graphic circulating on Facebook in South Africa in February 2021 claims that the Oxford-AstraZeneca vaccine against Covid-19 has been banned in Switzerland.

The graphic says this is “breaking news”, though it’s not clear what media outlet this “news” is coming from. It reads: “Switzerland has banned the AstraZeneca/Oxford vaccine for ALL citizens in that country.”

It goes on: “This follows France, Germany, Sweden and Poland advising against its use for people over 65. This is the same vaccine whose 1 million doses arrived in South Africa this week!”

The Oxford-AstraZeneca vaccine is one of several vaccines against Covid-19 being administered in countries such as the UK, Brazil and India.

One million doses of the vaccine arrived in South Africa on 1 February. But local distribution was paused after a preliminary study found that the vaccine showed only 22% efficacy against the 501Y.V2 strain of Covid-19.

This is the new variant first detected in South Africa in December 2020. It means the vaccine offers limited protection against mild to moderate cases of the disease.

Did Switzerland ban the Oxford-AstraZeneca vaccine for all its citizens? We checked. 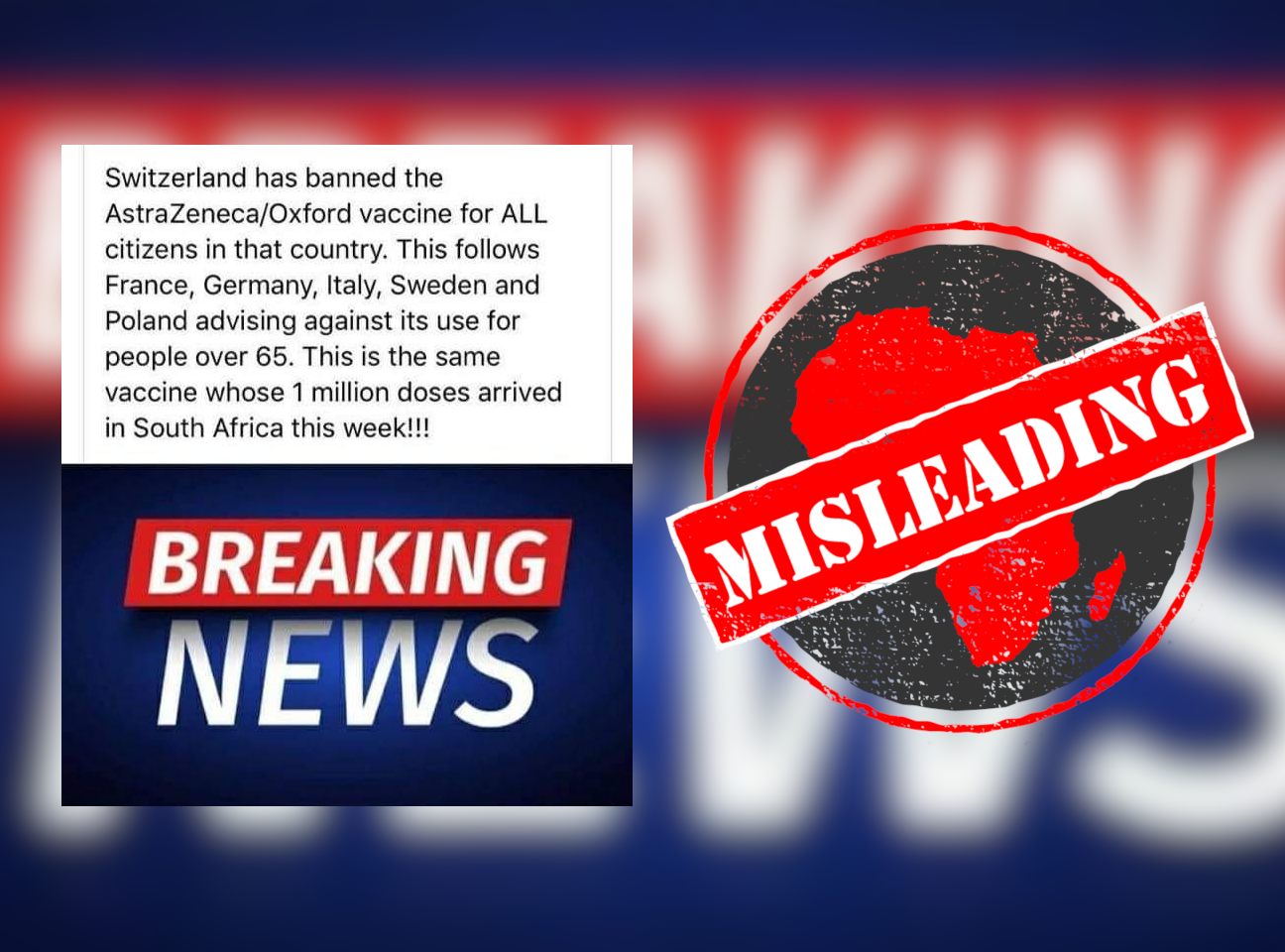 On 3 February Swissmedic, the country’s health authority responsible for authorising and supervising medicines, published a statement requesting further data for the AstraZeneca vaccine before approving the vaccine.

“In the case of the AstraZeneca vaccine, the data available and evaluated so far are not yet sufficient for approval,” the statement says.

“To obtain additional information on safety, effectiveness and quality, data from new studies are necessary.”

Swissmedic added they were waiting for the trial results from the phase three trials taking place in North and South America to be submitted by AstraZeneca.

“As soon as the results are available, temporary approval in the rolling process could be granted very quickly,” the statement ends.

Limited data for over 65 age group

The European Medical Agency released a statement on 29 January recommending the AstraZeneca vaccine for use in people over the age of 18 with no upper age limit.

This decision is because in clinical trials, only 660 participants were over 65 and only two in this group were infected with Covid-19. By comparison, the Pfizer vaccine trials included 16,000 participants over the age of 55.

According to the BBC, some regulators concluded that there was not enough evidence to show that the vaccine was effective for those older than 65.

The AstraZeneca vaccine has not been banned in Switzerland. Its approval has been delayed after a Swiss medical authority requested more data about its safety and efficacy.