No, tea does not cure Covid-19

Does tea contain chemicals known to cure Covid-19? A message going around Facebook, where it has even been translated into Afrikaans, claims a Chinese “hero doctor” found evidence that chemicals in tea “would significantly decrease the impact” of the Covid-19 coronavirus “on the human body”.

The message has also popped up on WhatsApp, and was sent to Africa Check’s WhatsApp fact-checking line for us to look into. It says its information is from Dr Li Wenliang, the Chinese doctor who warned his fellow medics about the new coronavirus disease in December 2019. Except the message is not true, and is unlikely to have come from Li. 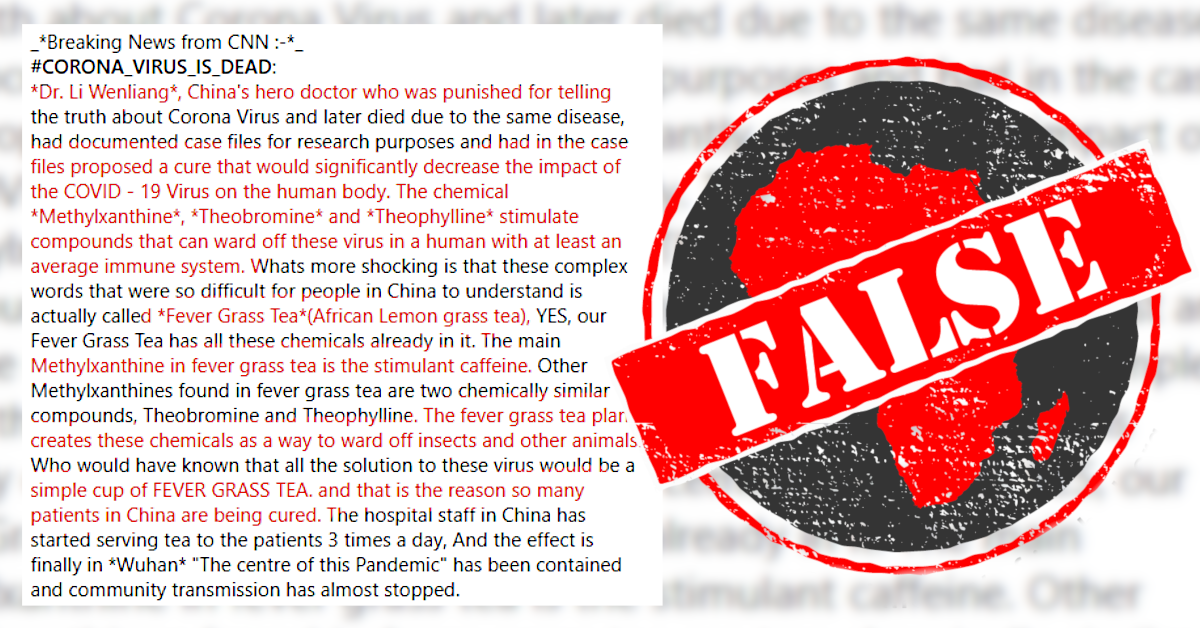 The main claim of the message is that three chemicals naturally present in tea can “ward off these virus in a human with at least an average immune system”. It says the chemicals are methylxanthine, theobromine and theophylline.

One version of the message shared on Facebook suggests that these chemicals are specifically found in “Fever Grass Tea (African Lemon grass tea)”. Other versions claim they are found in “regular tea”.

As Britannica explains, methylxanthines are a class of stimulants that include theobromine and theophylline, as well as the more familiar caffeine.

Theophylline has been widely used to treat asthma, and does have some effects on the human immune system. Except a study of the amount of methylxanthine stimulants in several types and intensities of brewed tea found that the concentration of theophylline, if present, was so low it could not be detected.

An article in Frontiers in Pharmacology gives a detailed description of theobromine. The substance is found both in tea and in chocolate. It is also produced by the liver when it processes caffeine.

Theobromine is toxic to some mammals, but it’s a stimulant for humans. The US National Library of Medicine explains that it has had some therapeutic uses as a diuretic (increasing the amount of urine a person produces), a heart stimulant, and a vasodilator (expanding the body’s blood vessels). Except the compound has not been known to “stimulate compounds” that help fight viral infections, as the message claims.

Both caffeine, the final substance mentioned in the message, and the methylxanthine that is most strongly present in teas, also have some therapeutic uses. Caffeine is predominantly used “to aid in staying awake and to restore mental alertness” although it has also been used (often in combination with other compounds) to treat migraines and headaches. It is not used to treat viral infections.

‘No vaccine, no medicine’ for Covid-19

The World Health Organization currently advises that there is no cure for Covid-19. “To date, there is no vaccine and no specific antiviral medicine to prevent or treat Covid-2019,” it says on its website, as at 15 April 2020.

While the WHO is considering some treatment methods, none of the substances mentioned in the message appear in the WHO database of published research and clinical trials related to Covid-19.

Not only is tea (lemon grass tea in particular) not a cure for Covid-19, as the message implies, it is not being considered as a treatment option for the disease.

Who was Dr Li Wenliang?

Li Wenliang was an ophthalmologist who worked in Wuhan, China. He was one of the first people to note the spread of a new disease that was later named Covid-19.

Li was initially chastised by Chinese police for “spreading rumours” about the disease but later came to be hailed as a “whistleblower” and a “hero” as the story of his death was reported around the world.

The viral message claims that Li “had documented casefiles for research purposes and had in the casefiles proposed a cure”. Except Li never released any research, and did not mention any “case files” when he spoke to international media. An article on Li’s importance published in the International Journal of Infectious Diseases also does not mention any research compiled by Li.

The article addressed healthcare workers in its final paragraph, saying: “Dr Li Wenliang’s example as an astute clinician should inspire all of us to be vigilant, bold and courageous in reporting unusual clinical presentations.” – Keegan Leech