No, Ugandan writer Kakwenza Rukirabashaija not dead – but still in police custody

Currently under house arrest. Gunmen are breaking into my house by force.

Rukirabashaija is a vocal critic of Ugandan president Yoweri Museveni, who has ruled the country for more than 35 years.

The writer has been detained before. His nonfiction book Banana Republic: Where Writing is Treasonous details his torture whiled in police detention in 2020. That detention was likely due to his novel The Greedy Barbarian, published in early 2020.

In October 2021, Rukirabashaija was awarded the PEN Pinter Prize for an International Writer of Courage. PEN International is a UK-based global association of writers.

It’s been reported that Rukirabashaija has again been tortured in detention. His lawyer told the UK Guardian that “at one time he was urinating blood”.

And on 1 January 2022, the Ugandan police announced that Rukirabashaija had died in detention. Or so it seems from a screenshot of what seems to be a tweet by the authorities, circulating on Facebook.

“We regret to announce the death of Novelist Kakwenza Rukirabasaija,” it reads, misspelling the writer’s surname.

“He has been in our custody on charges of offensive communication and was to be arraigned to court on 3rd Jan 2022. He had earlier informed us of his diabetic complications and our health team was responding to him.

“We send our condolences to the deceased family and friends.”

Has Rukirabashaija died in detention? And did Uganda’s police take to Twitter to announce his death? We checked. 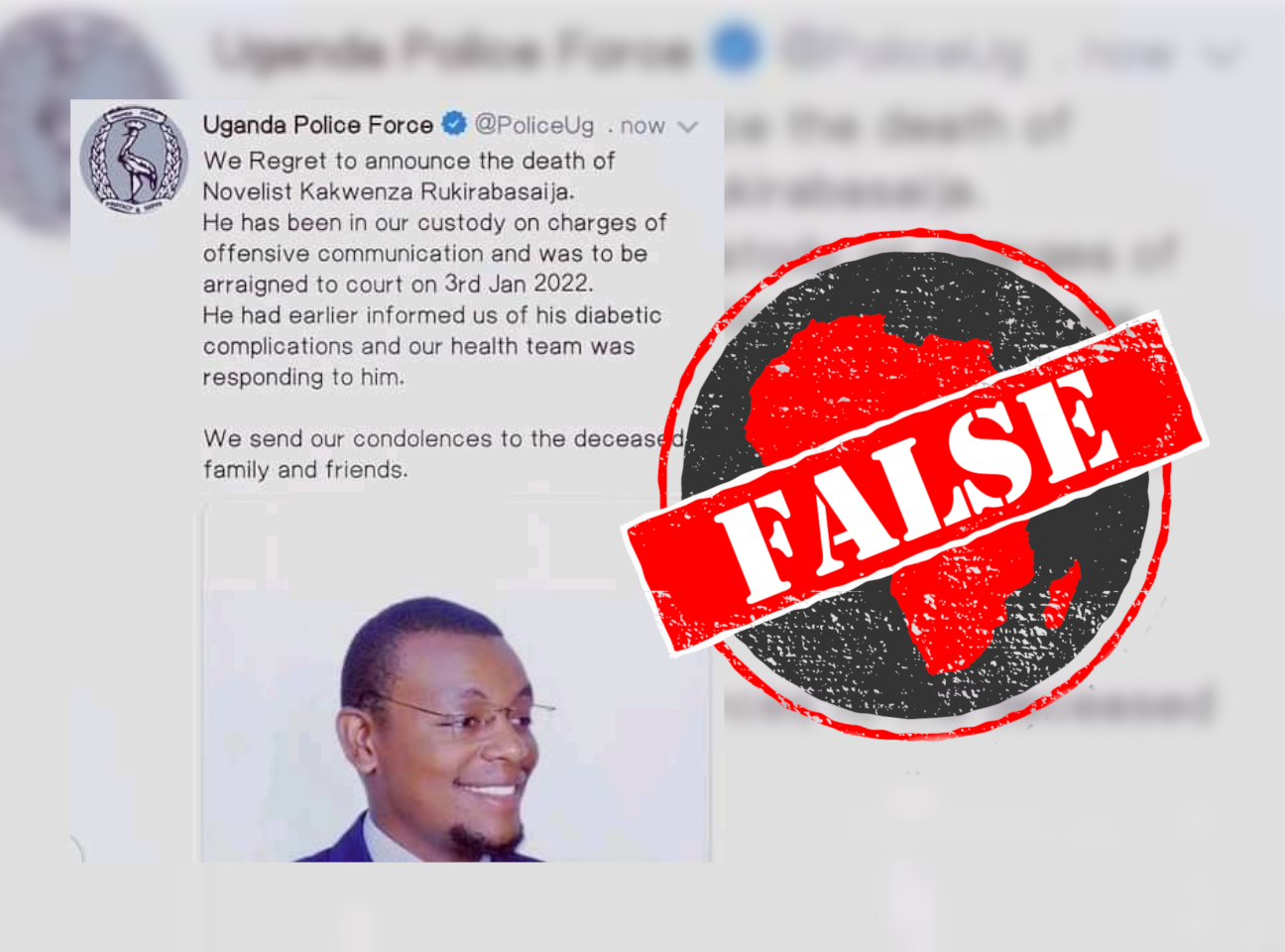 A quick Google News search for “Kakwenza Rukirabashaija” reveals that the writer is alive – and on 11 January was charged with two counts of the Ugandan crime of “offensive communication” for criticising Museveni and the president’s son, Muhoozi Kainerugaba.

Uganda’s police also dismissed the screenshot, labelling it, on Twitter, as “fake news”.

On 3 January, PEN International tweeted a call for Rukirabashaija’s release.

On 12 January Rukirabashaija’s lawyer confirmed that he had seen the novelist in prison and that, though badly tortured, the writer “will soon have his say”.

Rukirabashaija is alive, in custody, and awaiting trial.