“NEW COUPLE IN TOWN,” reads a headline on the lower half of what seems to be the front page of the 8 February 2022 edition of Uganda’s Daily Monitor newspaper, posted on Facebook.

Next the headline is a photo of Ugandan activists Doreen Nyanjura and Kakwenza Rukirabashaija in a loose embrace.

Nyanjura is the deputy mayor of Kampala, Uganda’s capital. She is also a political activist who regularly calls out president Yoweri Museveni’s government for the brutality faced by people who criticise him.

Rukirabashaija is an award-winning author and also a vocal critic of Museveni. He was arrested in 2020 for his literary work Banana Republic: Where Writing is Treasonous and novel The Greedy Barbarian.

In December 2021 he was again arrested for a series of tweets he posted about Museveni and the president’s son, an army general. He was allegedly tortured in jail and, after his release on bail in late January 2022, fled Uganda for Germany.

The main headline on the front page reads “A State of torture?” But did Daily Monitor also publish the photo of Nyanjura and Rukirabashaija, and the “leak” story? 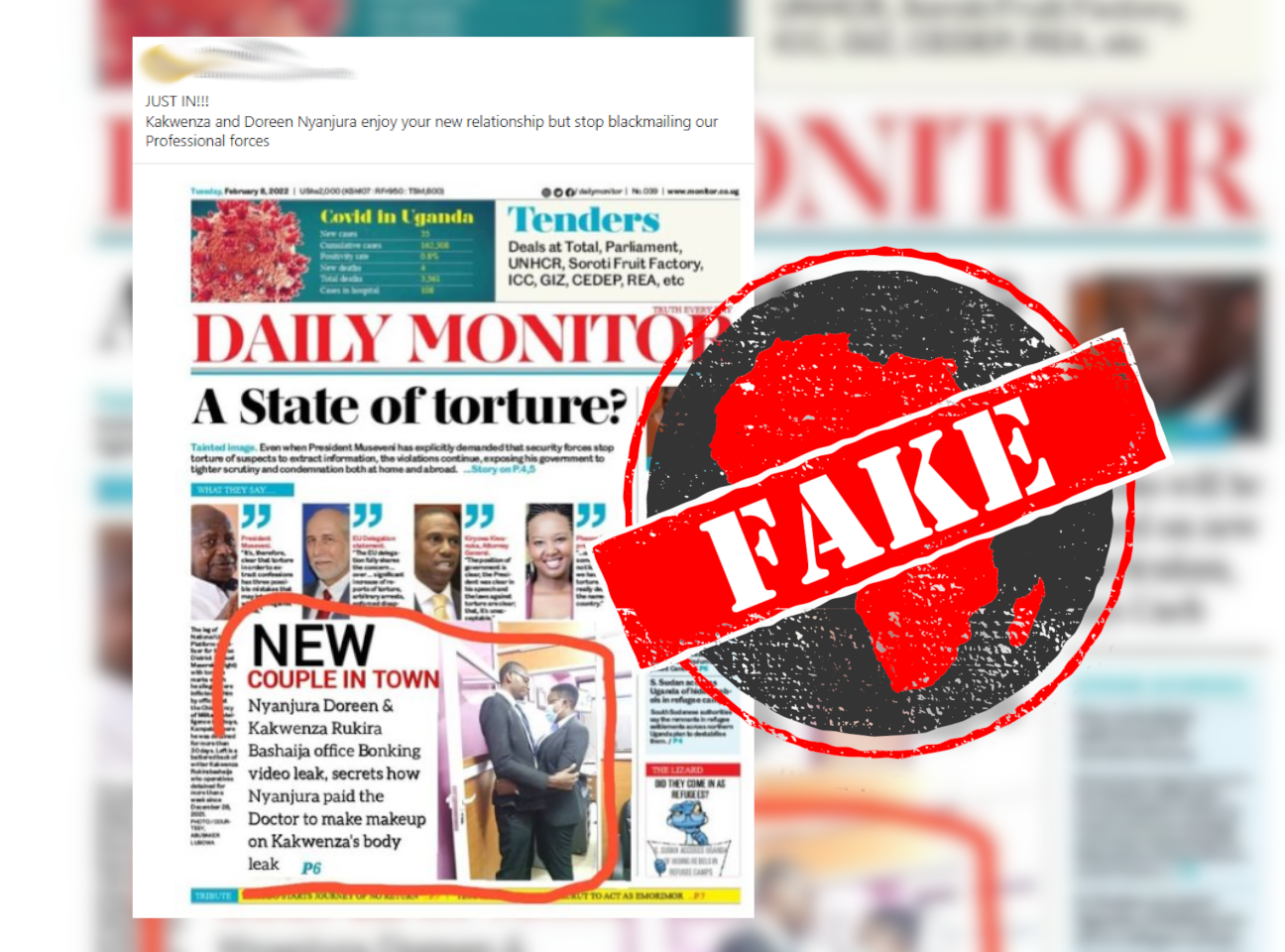 The story is poorly written and has grammar errors, which is unlikely on the front page of a national newspaper. It also uses a completely different font to the other items on the page.

The photo has been taken from Nyanjura’s Facebook page, where she posted several photos of herself with Rukirabasaija after his release from prison.

The original front page of Daily Monitor’s 8 February issue was posted on the newspaper’s Twitter and Facebook pages, and doesn’t show the photo or the story. In their place it has two photos of victims of state torture in Uganda.

A State of torture?

Get details of this and more stories in your copy of the Tuesday edition of the Daily Monitor.
Follow https://t.co/vXquE0XFuz to access e-paper.#MonitorUpdates pic.twitter.com/odKWMgZmLD

The caption reads: “The leg of National Unity Platform mobiliser for Kasese District Samuel Masereka (right) with torture marks which he alleges were inflicted on him by officers at the Chieftaincy of Military Intelligence in Mbuya, Kampala, where he was detained for more than 30 days. Left is a battered back of writer Kakwenza Rukirabashaija who operatives detained for more than a week since December 28, 2021.”