No, US army vet Kinessa Johnson doesn’t hunt wildlife poachers in Kenya and it’s not legal to do so

“Since #Kenya announced it is permissible to shoot poachers, this woman named Kinessa Johnson now hunts illegal poachers to protect wild animals,” says a graphic in a viral tweet published on 9 May 2022.

The graphic includes four photos of a heavily tattooed woman. She is holding guns in three of the photos and the fourth one appears to be a selfie.

Is there a woman named Kinessa Johnson who hunts poachers to protect wild animals in Kenya? And did Kenya announce that it is permissible to shoot poachers? We checked. 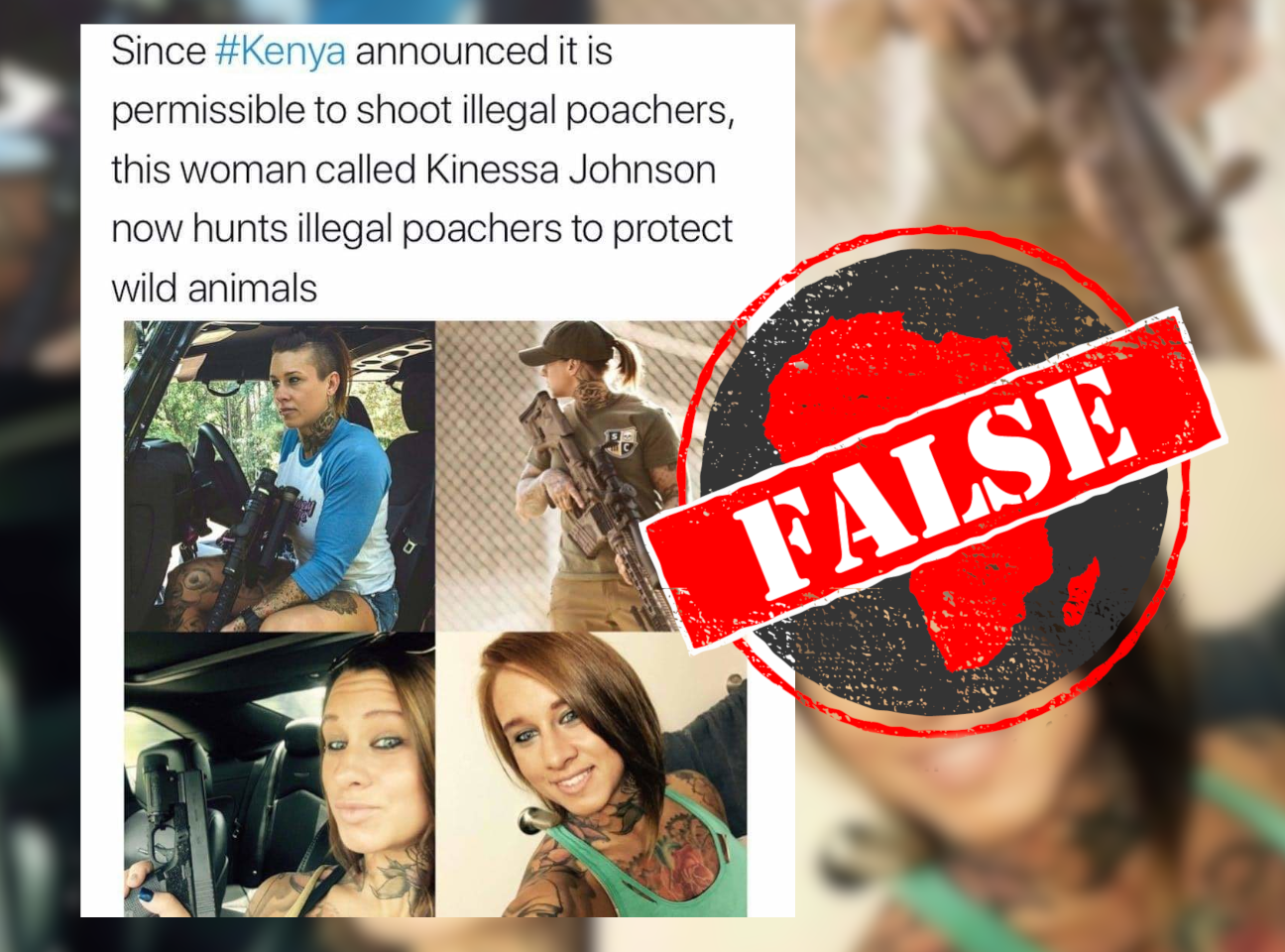 Kinessa Johnson member of Vetpaw in 2015

A Google search reveals that Kinessa Johnson is a US military veteran who was affiliated with anti-poaching nonprofit group Veterans Empowered to Protect African Wildlife (Vetpaw) in 2015.

Vetpaw describes itself as “a group of post 9/11 US veterans with combat skills who are committed to protecting and training park rangers to combat poaching on the ground in Africa”.

International media outlet Al Jazeera reported in September 2015 that Vetpaw had been kicked out of Tanzania following an interview Johnson did at a US gun show about the organisation. She reportedly said: “We’re going over there to do some anti-poaching, kill some bad guys and do some good.”

The organisation had shortly before this obtained permission to train African park rangers on anti-poaching techniques. But after Johnson’s gun show comments surfaced online she was framed by media outlets as a “wildlife poacher hunter”. This led to the Tanzanian government cancelling its agreements with the group and banning it from working in the country in order to discourage vigilantism.

Vetpaw founder and president Ryan Tate told Africa Check that Johnson’s interviews were unauthorised by the organisation. He added that the photos of her with large firearms were taken before she joined the organisation in 2015, when she worked as a model.

And Johnson only worked for the organisation “for about 35 days”, Tate said. Vetpaw terminated her contract after they became aware of her comments.

There is also no evidence Johnson was ever based in Kenya.

According to her page on professional employment website LinkedIn, she has worked with anti-poaching organisations in Tanzania and South Africa, not Kenya. Her account lists her as the director of operations at Tac-Trac Antipoaching Academy in South Africa since 2016.

And when speaking about her anti-poaching career in 2018, she reportedly told another news organisation: “Our intention is not to harm anyone; we're here to train park rangers so they can track and detain poachers and ultimately prevent poaching.”

The Kenyan government has cracked down on poaching in the country, resulting in a dramatic decrease in the numbers of animals that have been poached.

But reports that poaching is a capital offence in the country are false, and stem from a Chinese news report which was quoted widely around the world but has been comprehensively debunked.

The Kenya Wildlife Service confirmed to Africa Check that no such law is under consideration.