“I feel very offended. DP William Ruto has declared total hatred on us Muslims,” reads a tweet posted in February 2022. “What did we do wrong to him?”

The tweet includes a 33-second video of Kenyan deputy president William Ruto speaking in Kiswahili, and then saying in English: “This is a Christian nation and we have no apologies to make to anybody.” The text “RUTO TO MUSLIMS” is shown at the bottom.

The video seems to come from TikTok, where another version can be seen. Here it’s captioned: “The hate for Muslims is on another level.”

Kenya’s 2019 census indicates that 85.5% of its people are Christian, and 11% Muslim. But does the video really show Ruto declaring his “total hatred” of Muslims? 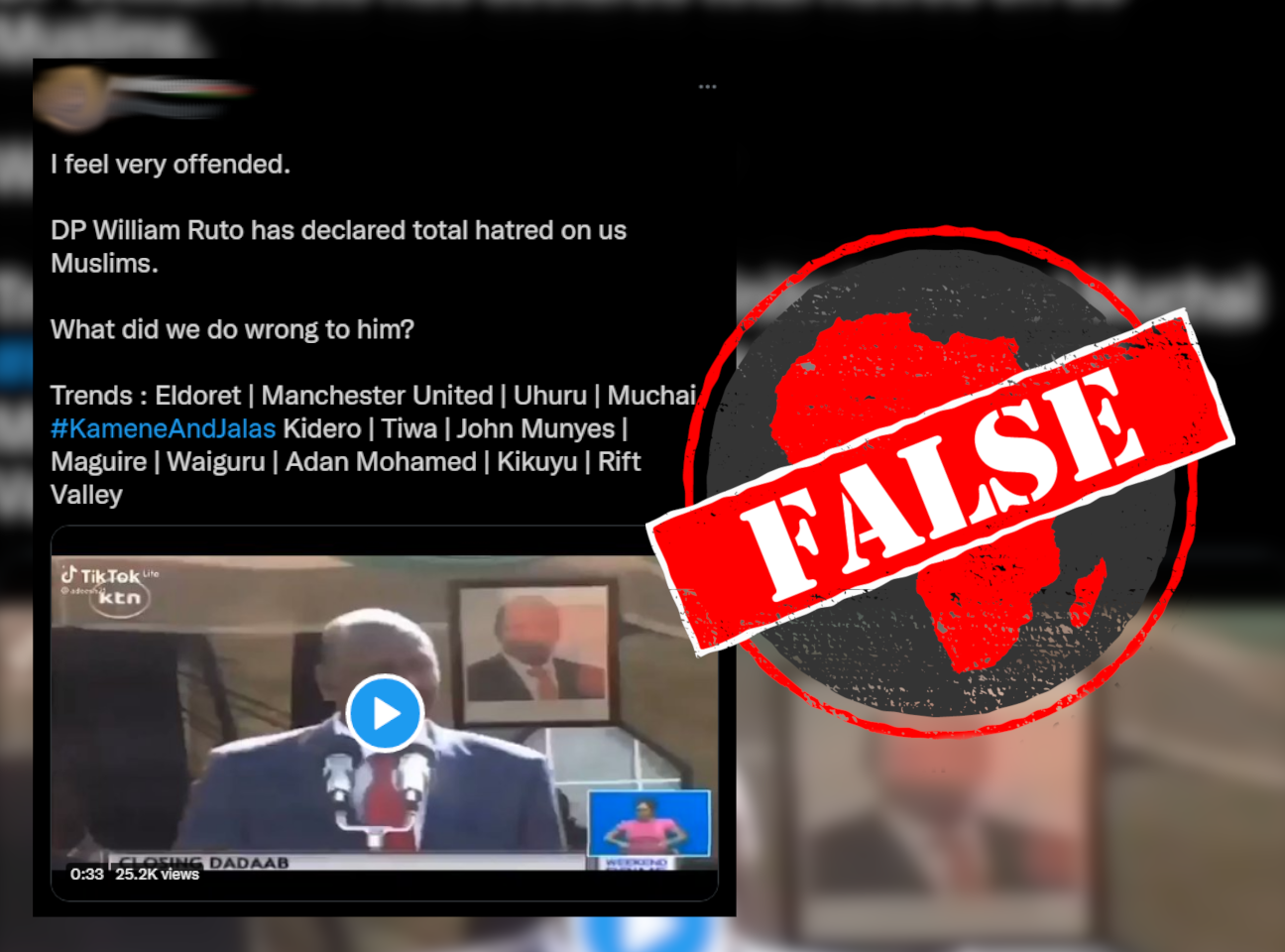 The video is made of two clips showing Ruto speaking at different events, years apart.

The first clip is from a longer news bulletin posted on the KTN News Kenya YouTube channel in 2015. In it, Ruto talks about the terror attack at Garrissa University College in April that year.

The attack was in Garissa county in eastern Kenya, on the border with Somalia. Four gunmen singled out and shot people they identified as Christians. It left 148 people dead. Somali Islamist group al-Shabaab claimed responsibility.

Garissa county is also home to the Dadaab refugee camps run by the UN High Commissioner for Refugees (UNHCR). The camp complex was set up in 1991 and mainly houses refugees from Somalia.

After the attack the Kenyan government called for the UNHCR to shut down the camps. The KTN News bulletin discusses the development, and shows Ruto echoing the government’s call.

He is not declaring his hatred of Muslims, and the original video does not have the text “RUTO TO MUSLIMS”.

‘People who don’t believe in God’

The video’s second and much shorter clip – Ruto saying “This is a Christian nation and we have no apologies to make to anybody” – has in turn been taken out of context from a nearly three-minute video uploaded by NTV Kenya in February 2020.

Ruto was talking in a church about what he saw as the divisiveness of the Building Bridges Initiative of his political rivals, president Uhuru Kenyatta and opposition leader Raila Odinga. His “Christian nation” comment was directed at people who don’t believe in God, not at Muslims.

His full statement was: “This is a Christian nation and we have no apologies to make to anybody. And we are not going to be blackmailed, threatened or victimised by people who don’t believe in God.”

The clips are taken out of context from events five years apart, put together to make a single, misleading video.