No, video of huge moon viewed from somewhere ‘between Russia and Canada’ not real

Viewing the moon can be awe-inspiring. But are there places on earth from where the moon appears to fill up half the sky and moves across the heavens in less than a minute?

He said it was filmed somewhere “in between Russia and Canada in Arctic” and praised God for the sight. In the comments, he shared two articles about the “May 26 super blood moon” and its supposed astrological significance, suggesting that the video shows this phenomenon.

The 36-second video clip is of a rural daytime scene, with the moon appearing very large, rising up behind cliffs or mountains at the horizon. The camera pans, following the moon, which then blocks the sun and the scene goes dark briefly. The moon then reappears in silhouette against the sky and disappears below the horizon.

But is the spectacular video legit? We checked. 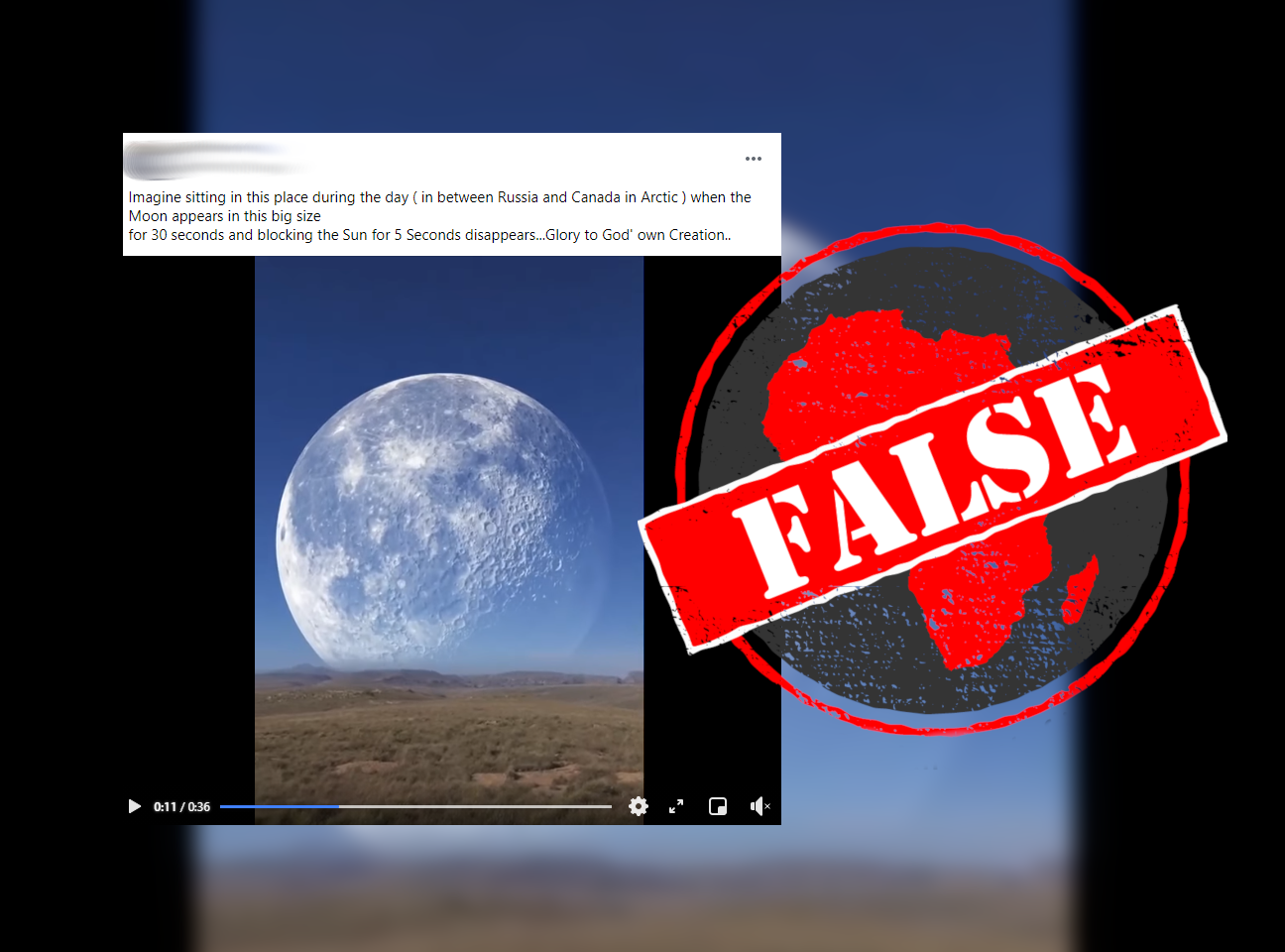 A Google reverse image search of a screengrab of the video led us to the same video, posted on social media platform TikTok on 17 May 2021.

The account has posted other videos, including one showing the planet Saturn floating improbably over a suburb and another showing the US presidential plane, Air Force One, coming apart mid-flight.

These are both clearly computer-generated videos and neither event is real.

But we turned to an expert about the video of the moon.

Not something that happens

Dr Shannon Schmoll is the director of Abrams Planetarium, a resource centre for astronomy and space science at Michigan State University in the US. She is an expert in basic astronomy, naked-eye astronomy, eclipses, constellations and the night sky.

She told Africa Check the video was “factually incorrect”. She first explained that the moon orbits around the earth every 29 days and “while it is constantly moving, it would not appear to move that quickly in our sky”.

“From our perspective the moon shifts about 15 degrees against the background of the stars every day, not the entire width of the sky in about a minute!”

She then said that the moon’s “apparent size in our sky”, depending on where it is in its orbit, is not a “very noticeable difference”. The moon always appears to be about the same size as the sun to the naked eye.

Schmoll said: “We see phases of the moon because the moon orbits the sun. Half the moon is always lit up by the sun, whichever half is facing the sun. But the position of the moon relative to the earth and sun affects how much of that lit-up side we see. When the moon is between the earth and the sun or near the sun in the sky, the lit up side is facing away from us and we would not see it as a full moon like you see in this video.”

Instead, the moon would appear as a new moon. To see the fully lit up half of the moon like it appears in the video, it would need to be on the opposite side of the sky from the sun.

There was a lunar eclipse on 26 May, which could be seen from the Pacific Ocean, New Zealand, some parts of Australia and Antarctica. It was also visible on the west coast of the United States, as illustrated in this animation from the Griffiths Observatory in Los Angeles.

Schmoll said that lunar eclipses “occur during a full moon when the moon is perfectly lined up and enters into Earth’s shadow. But those can only be seen from the night side of the earth while they happen”.

There was also an annular solar eclipse on 10 June, which could be seen from “the northernmost latitudes of Earth including parts of Russia”, said Schmoll. But at the time when Sonko posted the photoshopped video, it hadn’t happened yet and Schmoll said it would “not look anything like this”.