No, ‘vitamin B17’ isn’t a vitamin, doesn’t cure cancer – and could poison you

Published on 06 February 2020
“CANCER HAS BEEN DEFEATED,” declares a post on a Facebook page in Nigeria. “Cancer can be cured: Vitamin B17.”

It claims cancer was “defeated” decades ago, but “the truth has simply been concealed”.

“If there is cancer in one’s body, it is of utmost importance to intake big amount of B17,” it says.

The December 2018 post has had over a million views in the past three months, and been shared more than 43,000 times.

The World Health Organization estimates that 9.6 million people across the world died of cancer in 2018.

Could the deadly disease be cured by something a simple as the “vitamin B17” in sweet potato juice? 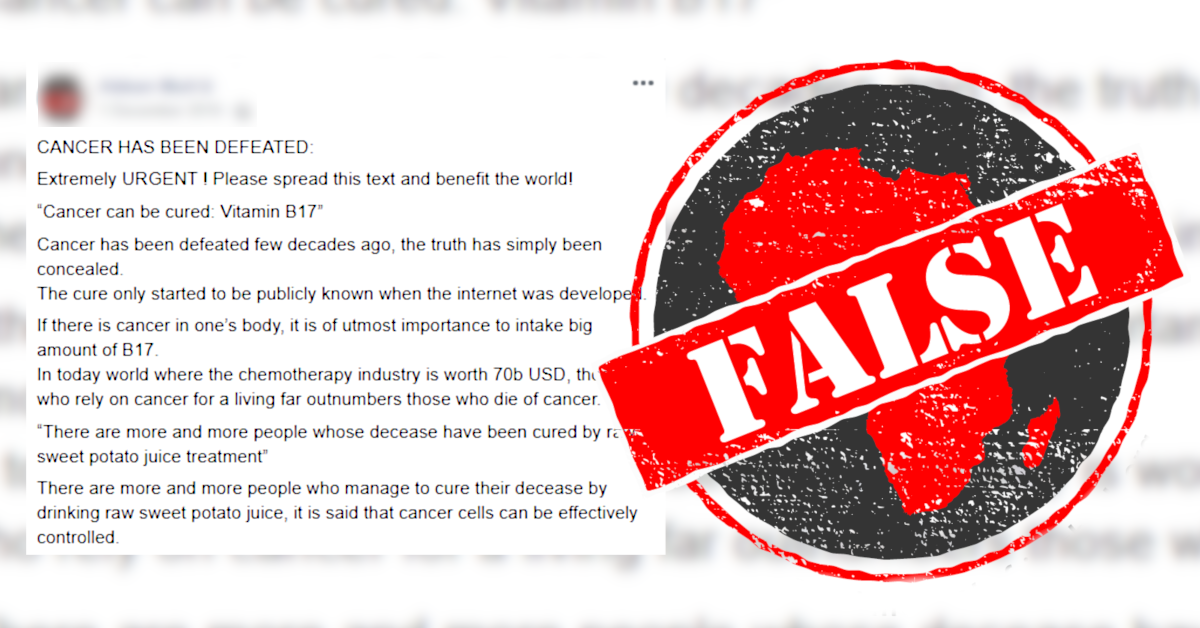 “Vitamin B17” is a name given to a substance called amygdalin, which is found in some nuts, seeds and plants. The US National Library of Medicine classifies it as an irritant.

But it doesn’t fit the definition of a vitamin, and hasn’t been approved as a vitamin by any authority. Vitamins are essential for good health, and amygdalin isn’t essential to our health.

Yet another name for “vitamin B17” and amygdalin is laetrile.

Laetrile is a partly man-made version of amygdalin, developed in the 1950s by Ernst T Krebs Jr, the son of a pharmacist who himself had no medical qualification. Krebs and his father initially patented it as a meat preservative.

Disproved as cancer treatment for decades

The claim that amygdalin/laetrile cures cancer is over a century old. In 1892 amygdalin was tested in Germany as an anticancer agent, but dropped because it was too toxic – and didn’t work.

“Despite decades of research, dating back to the 1950s, there is no evidence that laetrile or amygdalin can treat tumours in animals or humans,” the Cancer Association of South Africa says in a fact-sheet. “Clinical trials in humans have failed to find any benefits.”

This is backed up by the US National Cancer Institute and the UK charities Macmillan Cancer Support and Cancer Research UK.

More than this, amygdalin/laetrile contains cyanide – a deadly poison that makes the body unable to use oxygen.

“Some people have had cyanide poisoning” after taking laetrile, says Macmillan Cancer Support, “and several people have died as a result.”

The side effects of taking amygdalin/laetrile are the same as those for cyanide, says Cancer Research UK. These include fever, sickness, headaches, dizziness, liver damage, drooping eyelids, a lack of oxygen to the body tissues, a drop in blood pressure, nerve damage causing loss of balance and difficulty walking, confusion, coma and, eventually, death.

So taking in a “big amount of B17”, as the Facebook post suggests, isn’t “of utmost importance” – it’s really dangerous.

In 2015 the Cochrane Library published a systematic review of amygdalin/laetrile as a cancer treatment. A group of experts gathered as much evidence as they could to work out whether it supported the claim that the substance cured cancer.

“The claims that laetrile or amygdalin have beneficial effects for cancer patients are not currently supported by sound clinical data,” the experts concluded.

Banned substance sold on the internet

Because of its cyanide content, laetrile has been banned for sale by the European Commission and the US Food and Drugs Administration.

Laetrile is often sold on the internet, but Macmillan Cancer Support warns: “If you buy laetrile, there is no way of knowing what it contains, or if it is contaminated with other substances.”

Cancer Research UK adds: “Many websites promote laetrile as a cure for cancer. But no reputable scientific cancer organisations support any of these claims.

“Be cautious about believing this type of information or paying for any alternative cancer therapy over the internet.” – Mary Alexander