Published on 16 October 2019
A post widely shared on Facebook quotes Kenyan government spokesperson Col Cyrus Oguna as saying: “An ocean is not like a swimming pool.” The post then claims: “Alaaah our Navy guys were only taught how to rescue people from Swimming Pool.”

The 2 October 2019 post refers to the drawn-out effort to retrieve the bodies Mariam Kighenda, 35, and her four-year-old daughter Amanda Mutheu, who drowned when their car slid off a ferry into the Likoni channel near Mombasa on 29 September. They were pulled out of the ocean 13 days later, on 11 October.

The post includes a screenshot of Oguna speaking on NTV, a major Kenyan TV station.

But what did he really say? 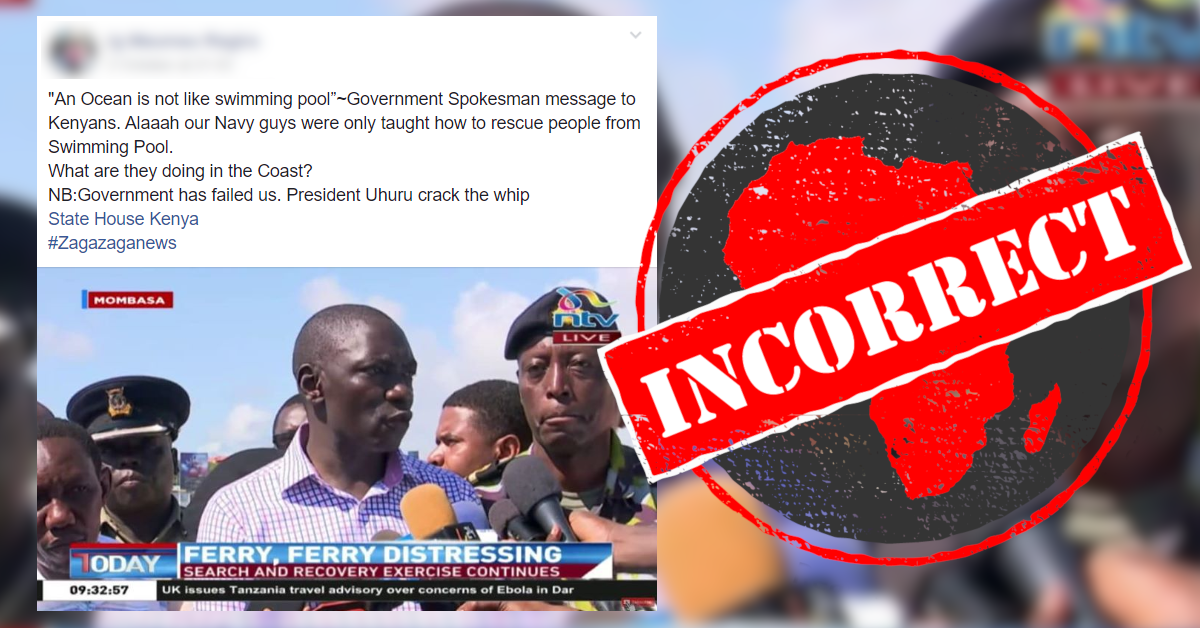 This roughly translates as: “Most people think that (diving) in the ocean is the same as swimming in a swimming pool at home. It is totally different.”

He said the recovery efforts had to be weighed against the maritime traffic, because the accident site was on the busy shipping route to the port of Mombasa. Also, the ferry services across the Likoni channel had to continue because shutting them down would mean heavy losses to the economy and inconvenience to the thousands of people who use the ferry every day.

That’s Kiswahili for: “There’s a notion that the ocean is like water in a basin, where, if a coin drops in there, you just go in and pick it up. That’s not it.”

‘Not as easy as we think’

He also said zero underwater visibility, ocean currents and the divers’ safety were some of the factors that slowed down the recovery of the car and the two bodies.

He added: “It’s not as easy as we wish to think from a layman’s point of view.”

At a later press conference, Bassen said: “I would really like to commend the Kenya navy, again, because those guys are quite incredible – hard-core divers if I've ever seen one. They dive these murky waters, shark-infested waters, without shark shields. They are putting their life on the line, they are risking their lives.”

There is no evidence that Oguna said or suggested that the Kenyan navy was only trained to rescue people from swimming pools. The Facebook post is simply the user’s misinterpretation of Oguna’s explanation of difficulties in the recovery efforts. – Grace Gichuhi