“Saudi Arabia locked down, no flights in and out,” begins a message about the Covid-19 pandemic circulating on Facebook and WhatsApp in March 2021.

It lists several other countries that have put lockdown and other measures in place to slow the spread of the disease.

The message then says: “ALL these countries have confirmed that the THIRD WAVE is more deadly than the first, as was the case from 1917 to 1919 with the Spanish flu. Millions of people died.”

But is its list of Covid-19 restrictions accurate? We checked. 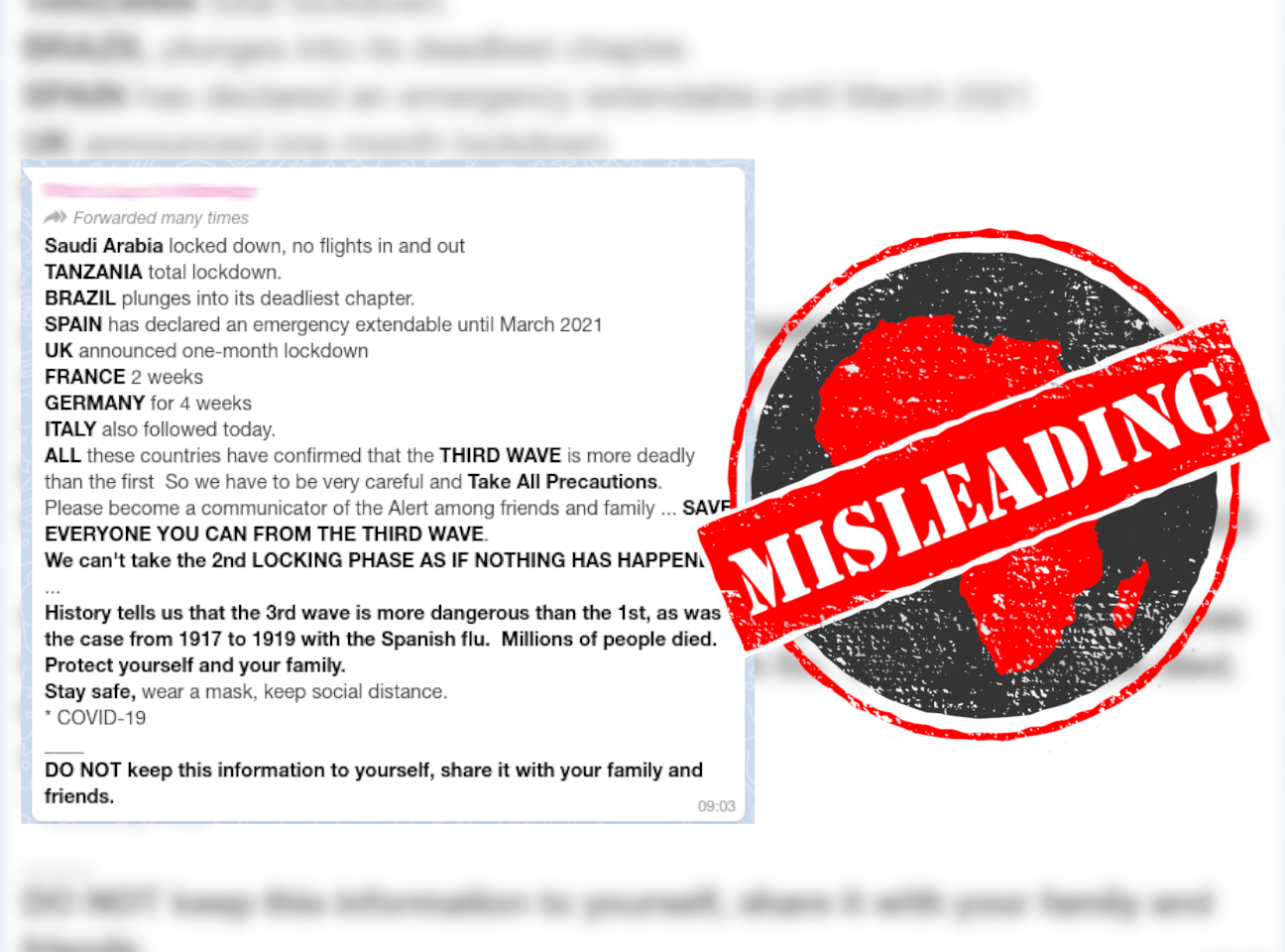 If you recognise the message, it’s because it has appeared on social media before.

In November of 2020, as a second wave of Covid-19 cases started building in South Africa, Africa Check debunked a message claiming that events in the same list of countries “CONFIRMED the SECOND WAVE IS MORE DEADLIER” (sic). This message warned that “history tells us the Second wave is more dangerous”.

Some grammatical errors in the message have been removed, and other parts altered – most notably, “second wave” is now replaced with “third wave”.

When Africa Check debunked the earlier message, most versions of it included false claims made in other widely shared social media messages. These have been removed from the new message, but it is still wildly misleading.

WhatsApp users first started sending Africa Check the message on 19 March 2021. It has no date, but the restrictions it describes seem to come from very different points in time.

It claims that “ITALY also followed today”. Italy imposed new lockdown restrictions on 15 March 2021 in an effort to prevent a third wave of infections. The restrictions are applied differently in different colour-coded “zones” with the whole country to be declared a “red zone” under national lockdown from 3 to 5 April.

The message claims that Tanzania is under “total lockdown”, which is not true at time of writing, and was not true on 15 March. The country’s president, John Magufuli, had not made a public appearance since 27 February 2021, and would be declared dead only days later, on 17 March.

Despite suggestions that Covid-19 was widespread in Tanzania, from the start of the pandemic Magufuli had refused to impose a lockdown or encourage other preventative measures.

The message would have been correct to say Brazil was entering “its deadliest chapter” if it had first been posted in mid-March. According to the World Health Organization, Brazil recorded more than 2,000 deaths in a single day for the first time on 12 March 2021. Its recorded daily deaths have risen since.

But it’s not true that in mid-March, Spain “declared an emergency extendable until March 2021”. While Spain did have regional lockdowns and a state of emergency in place, in October 2020 authorities said the state of emergency would last until at least 9 May 2021.

The message claims that the United Kingdom “announced one-month lockdown”. But each of the four countries in the UK – England, Scotland, Wales and Northern Ireland – have implemented different lockdown measures for different lengths of time.

Wales went into lockdown on 20 December 2020. Its “stay at home” rule was eased on 13 March 2021, and restrictions on non-essential business are set to be lifted by 12 April, when all pupils will return to school.

England reopened schools on 8 March, beginning the process of easing a lockdown implemented on 4 January. Northern Ireland announced in February that it would extend a lockdown imposed on 26 December 2020 until 1 April 2021.

Scotland’s lockdown, also imposed on 4 January 2021, started to ease in early March. The government plans to remove the “stay at home” order on 5 April, with shops, bars restaurants, gyms and hair salons set to start reopening from 26 April.

And according to Oxford University’s Covid-19 Government Response Tracker, Saudi Arabia has steadily eased Covid-19 restrictions since 30 May 2020, with a slight uptick from 22 February to 6 March 2021. The country had previously banned flights from 20 countries.

Other parts of the message are similarly jumbled, with no clear time frame and claims that – at their most accurate – lack context and specific details.

Instead of believing and sharing this inaccurate and alarming message, use the advice of public health authorities like the World Health Organization or your country’s health department.