Only one of two photos shows Kampala, Uganda

A graphic with two photos side-by-side claims to show roads in Uganda’s capital Kampala “before 1985” and “now”.

The graphic was posted in two public Facebook groups with over 100,000 members each and on a page followed by 110,000 people.

The black-and-white photo showing “Kampala before 1985” is of rows of vehicles in traffic. You can also see bicycle commuters next to crowds of pedestrians on the side of the road.

Uganda’s current president Yoweri Museveni took power in 1986. The graphic insinuates that there was better infrastructure in Kampala before he came to power.

“#MuseveniMustGo,” reads the caption to one widely shared post.

Data from CrowdTangle, Facebook’s public insights tool, shows that this post has been shared hundreds of times, prompting over 1,000 interactions.

But do the photos in the graphic show past and present-day Kampala? We checked. 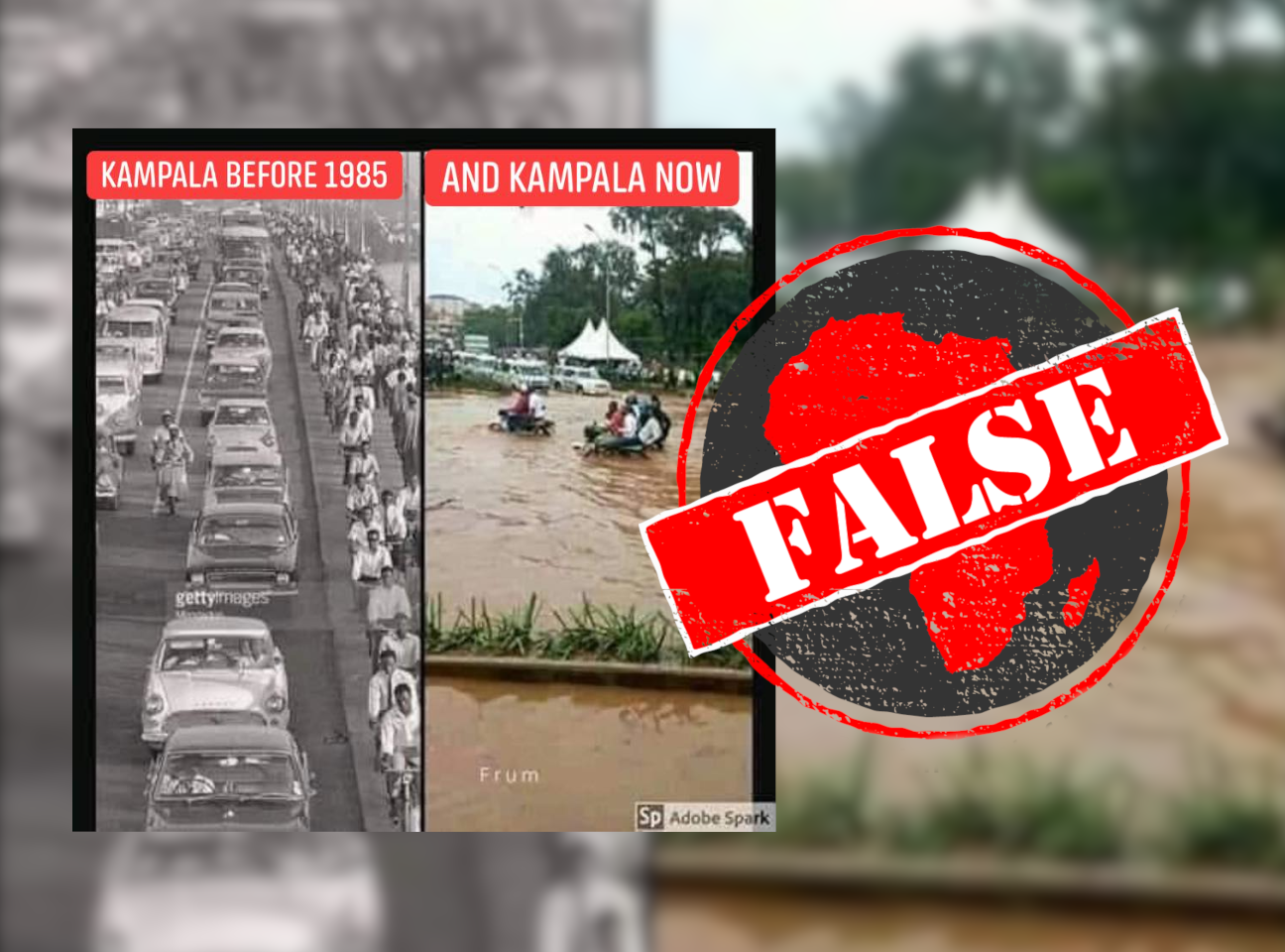 The black-and-white image on the graphic has a watermark of the words “gettyimages”. A TinEye reverse image search revealed that the photo was taken in Lagos, Nigeria in 1965.

The photo is captioned: “Wide shot of a road filled with cars in Lagos: each morning, a thousand of cars and bicycles of employees crowd the centre of the city. Lagos (Nigeria), October 1965. (Photo by Mondadori via Getty Images).”

A Google reverse image search revealed that the photo of flooded roads was published in a blog post on 22 October 2019, with the claim it showed floods in Kampala.

We also found the same photo on Facebook, published the same day, giving the location as “Clock Tower junction” in Kampala.

A search on YouTube of “Kampala clock tower flooded” led us to a video posted on 16 July 2018. It shows some of the elements in the photo – the trees, the green plants on the road shoulders, and the partly submerged passenger-carrying motorcycles.

The video also shows a minivan with a blue-white line along the side, similar to those operating in Kampala. Our search for the exact photo was unsuccessful.

On 26 March 2021, the Daily Monitor, a mainstream Ugandan newspaper, reported that the Kampala Capital City Authority had issued a warning on “the most dangerous or risky roads that are vulnerable to floods during [the] rainy season”.

Uganda’s capital has had a flooding problem which the city has reportedly been trying to address through the remodelling of the drainage system.

Only one of the two photos in the graphic shared on Facebook was taken in Kampala. The other is from Lagos, Nigeria in 1965.