“Greece and France... Yep its happening, time to unlesh the new TRUTH variant,” reads the caption of two photos of what seem to be mass protests, posted on Facebook in July 2021 and shared in South Africa.

The first photo shows a huge crowd of people on an avenue in Paris, France’s capital city. The city’s famous Arc de Triomphe can be seen in the background. Many in the crowd are wearing yellow reflective vests.

The second photo is of another crowd, flanked by police, in a city square. The flag of Greece can be seen waving in the crowd.

The photos were also posted on an Australia-based Facebook page, with a similar caption: “Greece & France! Thousands rally against COVID-19 vaccinations and government restrictions.”

But do the photos really show people “unleashing the TRUTH variant” in protests against Covid-19 measures in Greece and France? 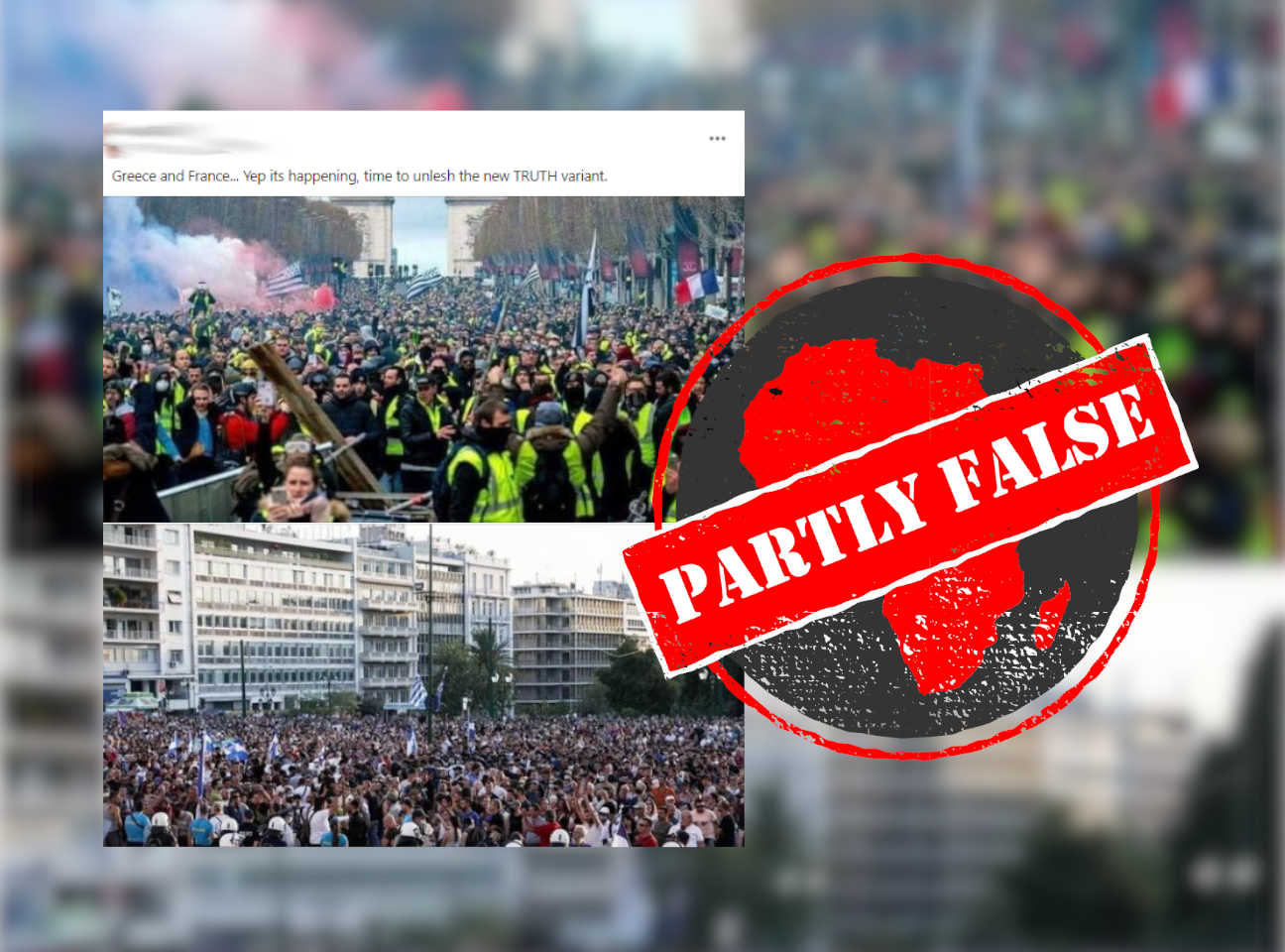 Protest against vaccinations in Greece, against fuel tax in France

A Google reverse image search of the second photo reveals that it does indeed show a rally against Covid-19 vaccinations, in the Greek capital of Athens on 14 July.

The photo appears in an article on M3 News, an international online news magazine.

“More than 5,000 anti-vaccine protesters, some of them waving Greek flags and wooden crosses, rallied in Athens on Wednesday to oppose Greece’s coronavirus vaccinations program,” the article reads.

It adds: “Protests are fairly common in Greece and there have been several in recent months on issues ranging from new labour law to the most recent Israeli military campaign on Gaza.”

But a TinEye reverse image search of the first photo, filtered for the oldest version, reveals that it has been online since at least 4 December 2018 – over a year before the coronavirus was first identified in late December 2019.

The photo can be found on the French-language stock photo website Divergence Images. A machine translation of its caption reads: “Demonstration of the Yellow Vests on the Champs-Elysees, Paris on November 24, 2018.” It was taken by Olivier Coret.

According to the US National Public Radio website, the 2018 yellow vests protests in France were sparked by the announcement of a new environmental tax on fuel.

“Nicknamed for the safety vests worn by protesters, known as gilets jaunes, the yellow vest movement has sparked a political crisis for the French government,” the NPR says.

“The protests started in the French provinces but spread to Paris, where demonstrations turned into riots over the weekend and scenes of violent civil unrest played out along the city's famous Avenue des Champs Élysées.”

The second photo does show a protest against Covid-19 vaccinations, in Greece, but the first photo is of a demonstration against a fuel tax in France, more than two and a half years ago.

No, unvaccinated people may enter and leave Australia, other countries – no evidence only vaccinated have spread Omicron Covid variant