A graphic shared on Facebook in Nigeria and South Africa shows a photo of a young leopard in the lap of its supposed rescuer.

Text reads: “This little guy was rescued after his mother was murdered by a hunter. His eyes say it all, don’t you think? If you want to ban trophy hunting forever, spread this everywhere.”

The graphic was flagged as possibly false by Facebook’s fact-checking system. Is it accurate? 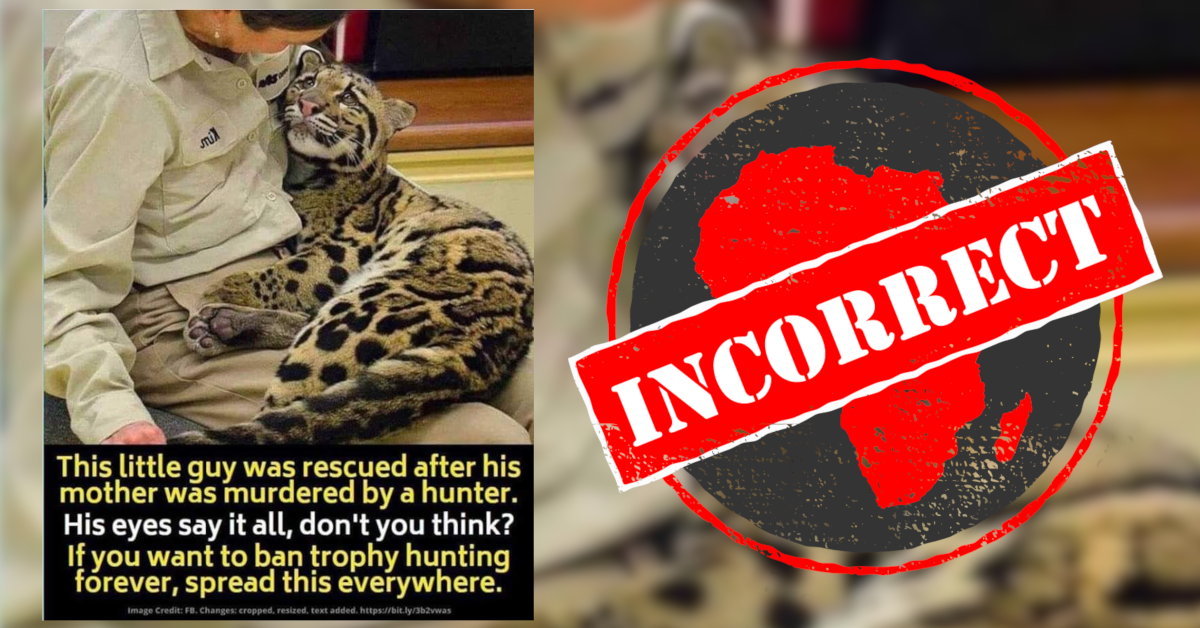 Upon closer inspection, the graphic has an image credit that links to the Facebook page Creature Crusade, which describes itself as “passionate about wildlife, and preventing the senseless killing of innocent animals”.

A browse through its photo timeline confirms that Creature Crusade created the graphic, as the same font in the same colour is used in many of its images.

The original graphic posted by the Facebook page has been deleted. This is perhaps because the post was debunked by other Facebook users, who identified the leopard as belonging to a zoo in southern California in the US.

The photo was originally shared by the San Diego Zoo on 15 January 2014, with the caption: “A moment with 8-month-old clouded #leopard cub, Ganda. Photo by Deric Wagner.”

Named for its cloud-like spots, the clouded leopard is typically found in the rainforests of Southeast Asia.

The first clouded leopard arrived at the San Diego Zoo from Singapore in 1940.

Africa Check contacted the San Diego Zoo, who confirmed that the photo was taken by one of their longtime members and supporters.

The zoo also debunked the anti-trophy hunting graphic. “This clouded leopard is named Ganda … Her mother was not killed by a hunter. She was born at the Nashville Zoo and came to San Diego to participate in our animal ambassador programme.”

Ganda still lives at the San Diego Zoo, where she acts as an animal ambassador along with two other clouded leopards named Haui-San and Kya, who joined the zoo through the same breeding programme.


This #Caturday is cloudy with a chance of leopard. These beautiful cats get their name from cloud-shaped spots on their coat. Shout-out to staffer Maureen O'Duryee for this stunning capture of our #cloudedleopard ambassador, Ganda.