“If you're based in Port Elizabeth please make sure you boil your water before use, even if it comes from the tap,” reads a message posted on Facebook in November 2020.

“I saw that there are chances that the water has been contaminated with something that is making people sick & I find this to be more of a coincidence with numbers of Covid-19 picking up aswell in the last few weeks.”

The message goes on to claim that South Africa’s government is using the city’s residents as “lab rats” for the first trial of a Covid-19 vaccine.

But is Nelson Mandela Bay’s rise in Covid-19 cases linked to drinking water? We investigated. 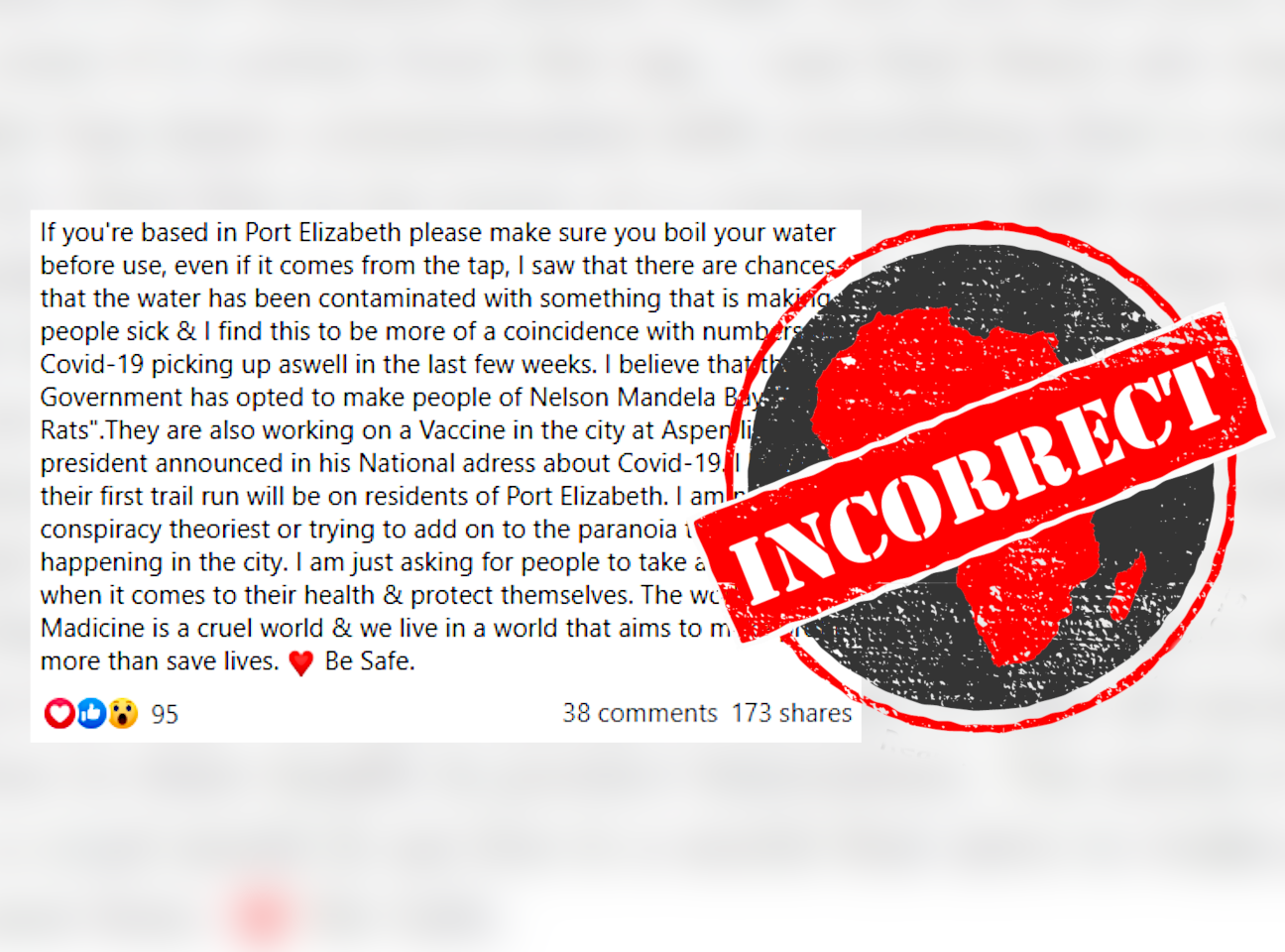 There have been reports of poor water quality in the municipality for several years.

In 2019 the water was reported to be discoloured. The municipality said this was caused by increased chlorine levels used to control bacteria levels in warmer weather.

In November 2020 the Herald, a local newspaper, published an article headlined “Is Nelson Mandela Bay water safe to drink?” It reported that the water contained aluminium, manganese and bromodichloromethane. The Facebook user posted a screenshot of the article in the comments on his initial post.

Can the virus spread in water?

“Coronaviruses spread through breathing infectious particles through your nose and mouth and infecting cells in the upper airways and lungs,” Prof Lynn Morrison, interim executive director of South Africa’s National Institute for Communicable Diseases (NICD), told Africa Check. “There is no evidence that Sars-CoV-2 can be transmitted through water.”

Dr Kerrigan McCarthy, also from the NICD, said the virus was highly unlikely to be transmitted by the “faeco-oral route”. This refers to contaminated faeces of an infected person being ingested by another person. McCarthy said there was little live virus present in stool. And Sars-CoV-2 requires living human cells to reproduce; these are not present in wastewater.

Only parts of virus can be detected in water

Dr Anthony Turnton, a scientist specialising in water resource management, told Africa Check that wastewater could be tested to monitor the spread of the virus in an area. But the tests identify “portions of the virus, not the whole virus”.

“When a scientist detects the virus in water, what they actually find are nucleotides, which are pieces of the virus,” he said. “These are not pathogenic – they do not cause disease. If the water smells of chlorine, it means that it has been disinfected and is safe to drink.”

Turnton added that if there was concern about water quality, it would be best to boil it.  Importantly, it should be stored in a clean and uncontaminated container.

FACTSHEET: What you need to know about vaccine approval in Kenya

Like in many other countries, Covid-19 vaccines are dominating the public debate in Kenya. But how are vaccines and other drugs given the gr...