“While Chris Hani, Jacob Zuma and other were in exile, Ramaphosa was entering into business deals with the Oppenheimer family,” reads text above a photo on a screenshot posted on Facebook in June 2021.

Chris Hani was a leader of the struggle against apartheid, particularly in the African National Congress (ANC) and its armed wing, and the South African Communist Party (SACP). He went into exile in 1963.

In 1990 liberation movements such as the ANC and SACP were unbanned and exiles, including Hani and Zuma, returned home. The long process of dismantling apartheid began, with South Africa holding its first democratic elections in 1994.

But Hani was not there. In 1993 he was assassinated by Polish immigrant Janus Waluz in conspiracy with Conservative Party leader Clive Derby-Lewis.

The Oppenheimers are one of South Africa’s wealthiest families, a wealth built on gold and diamond mining. Ernest Oppenheimer established the Anglo American mining company in 1917.

Ramaphosa was a prominent leader of the antiapartheid struggle inside South Africa, heading the powerful National Union of Mineworkers from 1982 and playing an important role in the Congress of South African Trade Unions, the United Democratic Front and the later Mass Democratic Movement.

But does the photo show him also doing business deals with the Oppenheimer family while his comrades were in exile? 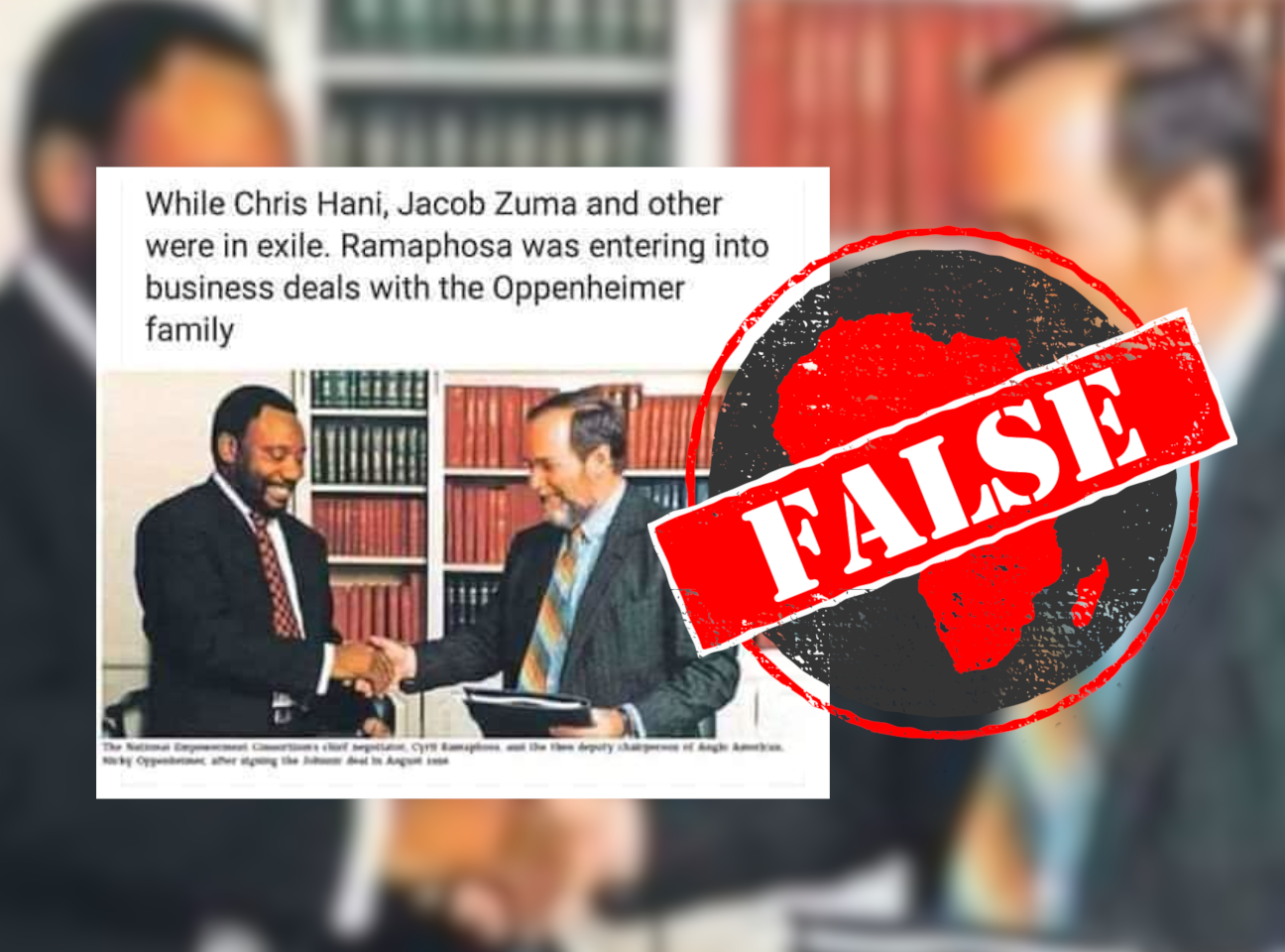 A Google reverse image search of the photo led us to a page of a print article, posted on Facebook.

Here the photo is captioned: “The National Empowerment Consortium’s chief negotiator, Cyril Ramaphosa, and the then deputy chairperson of Anglo American, Nicky Oppenheimer, after signing the Johnnic deal in August 1996.”

A Google search using the caption in turn led to a PDF of a publication produced by South Africa’s City Press newspaper, titled 100 Years of Anglo American and uploaded on the company’s website. The article and photo can be found on page 30. The publication was produced in 2017, Anglo American’s centenary.

The article discusses Anglo American’s black economic empowerment (BEE) deals. One of them was the Johnnic deal in 1996, reportedly worth US$900 million. The deal was widely covered by local and international media.

“It wasn't the usual handshake on a deal,” the New York Times reported on 24 September 1996. “One hand, white, belonged to Nicholas Oppenheimer, scion of the family that controls much of South Africa's gold- and diamond-mining. The other, black, belonged to Cyril Ramaphosa, a prominent foe of the old, white-ruled South Africa and leader of a crippling 1987 miners strike.

“The $900 million deal that the two men signed last month sells a large piece of the Anglo American Corporation, the Oppenheimer flagship that by some estimates accounts for 25% of South Africa's gross domestic product, to a consortium of blacks led by Mr Ramaphosa.”

The photo doesn’t show Ramaphosa entering a business deal while other struggle leaders were in exile. It shows him shaking hands on a BEE deal in 1996. That was two years after South Africa’s first democratic elections, three years after Hani’s assassination and six years after liberation movements were unbanned and exiles returned home.

REPORT CARD: South African president Ramaphosa’s claims about the state of the nation

With Cyril Ramaphosa set to give his fifth state of the nation address today, we look back at claims from his previous addresses – and sugge...