A screenshot of a social media post, shared on Facebook, says it’s illogical that nasal swabs instead of mouth swabs are used to test for coronavirus infection when the virus is so contagious it can be spread in droplets of saliva.

“DNA can be at home through the mail with a simple mouth swab but the HIGHLY CONTAGIOUS COVID-19 in your MASK COVERED MOUTHS can’t be tested with a mouth swab???” it asks. “Does this sound LOGICAL??”

It then asks: “Is it possible that instead of retrieving a SAMPLE, they could actually be IMPLANTING SOMETHING???”

Covid-19 is a respiratory disease that spreads in small virus-carrying droplets released when an infected person coughs, sneezes or speaks.

It is mostly tested using a nasopharyngeal swab. The 15-centimetre swab is inserted through the nostrils into the cavity between the nose and mouth and rotated for about 15 seconds. It is then sent to a lab for testing.

Why are nasal swabs used instead of mouth swabs? 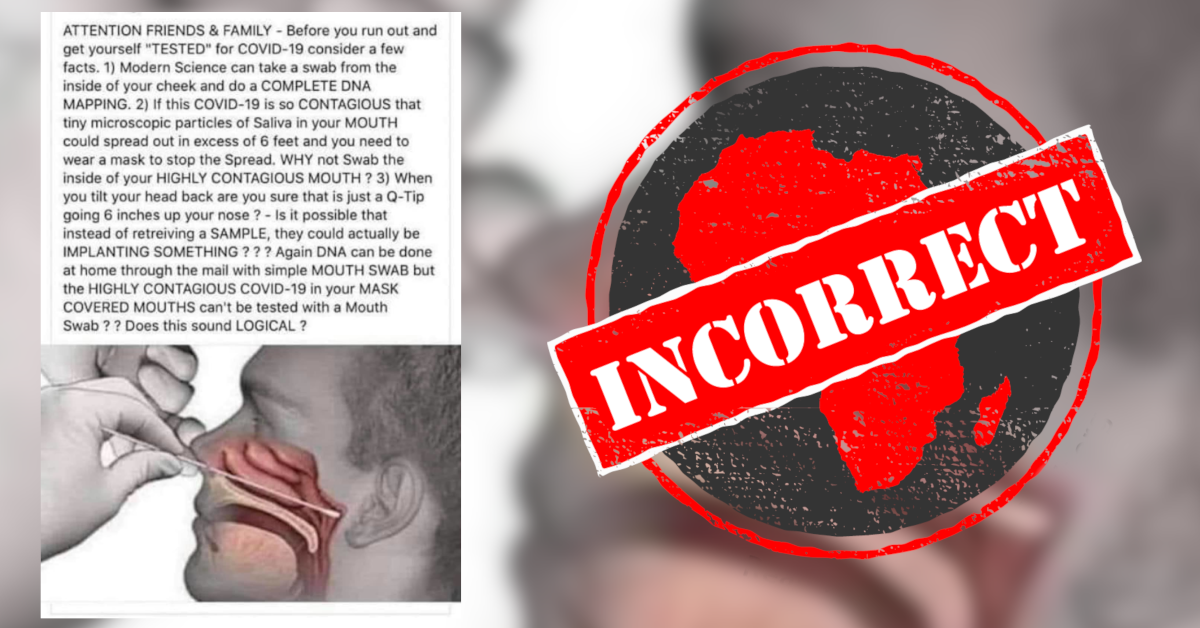 ‘A couple of drinking buddies’

The screenshot cuts out the name of the user who wrote the original post. But the original was checked by USA Today, who contacted the user. They report that the user admitted to coming up with the post with “a couple of drinking buddies” and did not base it on any sources.

Covid-19 tests that use saliva samples are currently being trialled. One being tested by Southampton University in the UK could allow people to collect their own sample at home by spitting into a pot.

But research indicates that saliva testing may be less sensitive than nasal testing, as saliva tests produce a lower concentration of the virus compared to nasal swabs.

This means that saliva testing may misdiagnose some people with Covid-19, who would have been correctly diagnosed with nasal testing.

It is also inaccurate to compare Covid-19 testing to DNA testing. According to the US National Library of Medicine, “nearly every cell in the human body has the same DNA” which is located in the cell nucleus.

DNA testing is done on tissue samples to test genes in cells. Covid-19 testing detects the presence of Covid-19 viruses in upper respiratory specimens such as mucus, saliva, and sputum.

It is possible to test for Covid-19 using saliva samples. But these tests aren’t yet as accurate as tests using nasal swabs.

And could “they” be “inserting something”? If an object was shoved into your nose on the end of a 15-centimetre swab, you’d know it.