“South Africa will launch a R500 money note and R10 coin,” begins a message going viral on Facebook since 6 June 2022.

“This is the sign of the Rand is loosing value, inflation is hitting hard. Notes like R200 downwards are loosing value. Prices of things going up. Soon we'll buy a loaf of bread at R150,00.”

The rand (R) is South Africa’s currency. The South African Reserve Bank produces and issues rands (and cents) in banknotes and coins. The notes currently in circulation are valued at R10, R20, R50, R100 and R200. There’s also a R5 coin.

The message includes four photos. The first appears to be a banknote with a zebra design, the South African Reserve Bank logo and the number 500. The second is a coin showing lionesses and the number 10. The third is a 500 Zimbabwean dollar note, and the final a $Z100 trillion note.

“This is the beginning of a catastrophic economy, that’s how poverty began in Zimbabwe. Zimbabwe started to make these big notes & then everything took a nose dive,” the message ends.

South Africa’s northern neighbour of Zimbabwe went through a decade of hyperinflation – price rises of more than 50% a month – from about 1998 to 2009. During the crisis, banknotes in the thousands, billions and trillions went into circulation.

But is South Africa’s reserve bank really set to launch a R500 note and R10 coin? 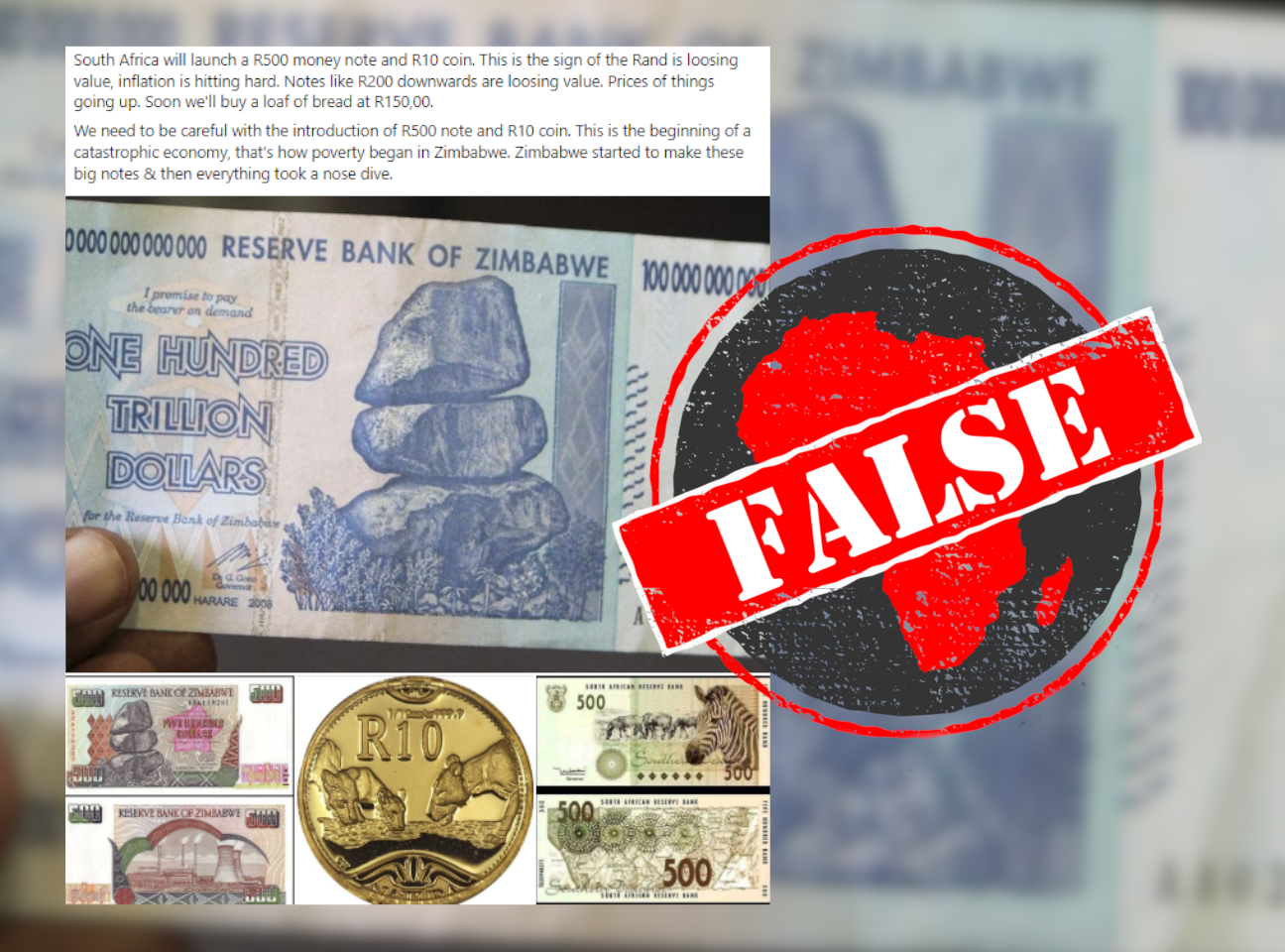 The first sign that the R500 note isn’t genuine is that former president Nelson Mandela’s image is missing. In 2005, the reserve bank included Mandela’s face in the design of all South African banknotes. And in 2018, a series of commemorative notes was released to mark Mandela’s 100th birthday.

A reverse image search reveals that the R500 note first appeared online 14 years ago, in 2008. It was posted on the user-generated design platform DeviantArt.

It was captioned: “This is a bank note I designed for the SABNS competition, you’ll find if you search for South African bank notes that my design looks almost exactly like those in circulation.” (By SABNS, the user probably meant SARB, for South African Reserve Bank.)

The image did the rounds online. This prompted the reserve bank to release a statement in early 2009 calling the banknote “fake”.

“South Africa has a family of five banknotes and the R200 note remains the highest denomination. The bank is not planning to issue any new notes, including R500 notes, in the near future,” the statement said.

The R10 coin in the message is genuine, but you won’t get it as change.

It’s a “non-circulating” gold bullion coin issued by the South African Mint – the coin-making subsidiary of the reserve bank – in 2003.

Bullion coins are made from precious metals such as gold and silver. Their value is based on the metal, not the number on the coin.

Higher value notes and coins not needed, not wanted

The fake R500 note resurfaced online after local website BusinessTech published an article on 6 June titled: “Reserve Bank on R500 note and R10 coin for South Africa”. But the headline is a bit misleading.

The article reports that a recent reserve bank study had found that South Africa was “not ready for a R500 banknote”.

The bank said introducing higher-value banknotes was only necessary when the highest denomination was the most circulated banknote.

“This is however not the case in South Africa as the R100 denomination is the most circulating banknote,” the bank reportedly said. “The other reason is whether the R200 is still used as a store of value – which it is – and therefore does not warrant a change.”

The reserve bank study finds that while there is an economic case for circulating a R10 coin, there is “no appetite from the public” to introduce the coin.

The rumour of the R500 note and R10 coin was boosted by a 10 June tweet, seemingly by the reserve bank.

“We introduce to you the first sample of our possible new Five hundred rand note,” the tweet reads, above an image of the fake note.

“Please note that this is a fake account and has been reported to Twitter,” it said on the same day. “SA Reserve Bank is not planning to issue a R10 coin nor a R500 note.”