Sudan’s capital flooded, so country should support Ethiopian dam? No, photo of New Orleans after hurricane

A screenshot of a Facebook post, reposted on an Ethiopian Facebook page, argues that Sudan should support the Grand Ethiopian Renaissance Dam to avoid the Nile river flooding its cities and “leaving its nation homeless”.

As evidence for this flooding, it uses a photo supposedly of Khartoum, the Sudanese capital, under water. But Africa Check has already found that the photo in fact shows a flooded New Orleans, a city in the US, in the aftermath of Hurricane Katrina in 2005.

“Last year: In September 2020, cities of Sudan were highly flooded by the water from the Nile river,” text on the screenshot reads.

“This year: Sudan is against the 2nd round filling of GERD in Ethiopia claiming it affects my water share. Water share for flooding its cities and leaving its nation homeless? It is advisable if Sudan participates in the filling of the dam so as to save its people.” 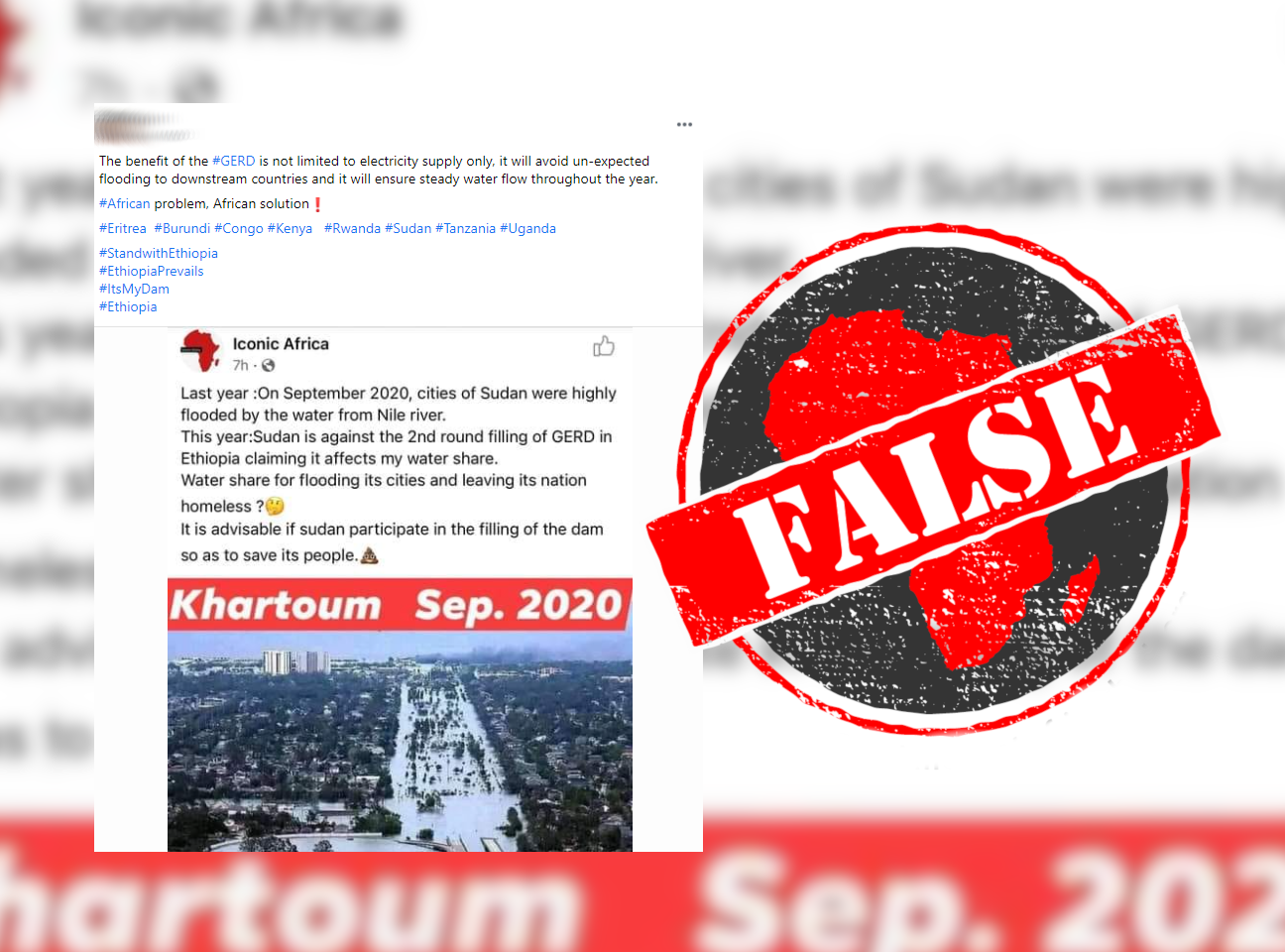 GERD, the Grand Ethiopian Renaissance Dam, lies near that country’s border with Sudan, on the Blue Nile. The river flows from Ethiopia into Sudan, joining the White Nile in Khartoum, where the two rivers become the Nile. This then flows north into Egypt and, ultimately, the Mediterranean sea.

“Half a century in the making, the hydroelectric dam is Africa’s largest, with a reservoir able to hold 74 billion cubic metres of water, more than the volume of the entire Blue Nile,” the Economist reports.

But the dam has caused ongoing tension between Ethiopia, on the one hand, and Egypt and Sudan. The latter two countries are concerned that the dam will choke off their much-needed supply of water from the Blue Nile.

Data from Crowdtangle, Facebook’s public insights tool, shows that the image has been shared in several posts, prompting thousands of reactions.

As we found in our previous fact-check, a Google reverse image search reveals that the flooded city in the photo is New Orleans, not Khartoum.

The photo can be found on the Getty Images website.

Here its caption reads: “NEW ORLEANS - AUGUST 29: In this handout photo, flooded roadways can be seen as the Coast Guard conducts initial Hurricane Katrina damage assessment over flights August 29, 2005 in New Orleans, Louisiana. Katrina made landfall as a Category 4 storm with sustained winds in excess of 135 mph. (Photo by Kyle Niemi/US Coast Guard via Getty Images.)”

The photo can’t be used in an argument in favour of GERD, because it shows a city in the US and has nothing to do with either Ethiopia or Sudan.