In all three quotes, the anti-apartheid activists could be interpreted as foreseeing South Africa’s current political climate.

The graphic is headed “I’ve often wondered about their statements ... What did they see?” and each quote is printed next to a photo of the man being quoted. The Facebook user claims: “This says it all, finish en klaar.”

But are these quotes accurate? 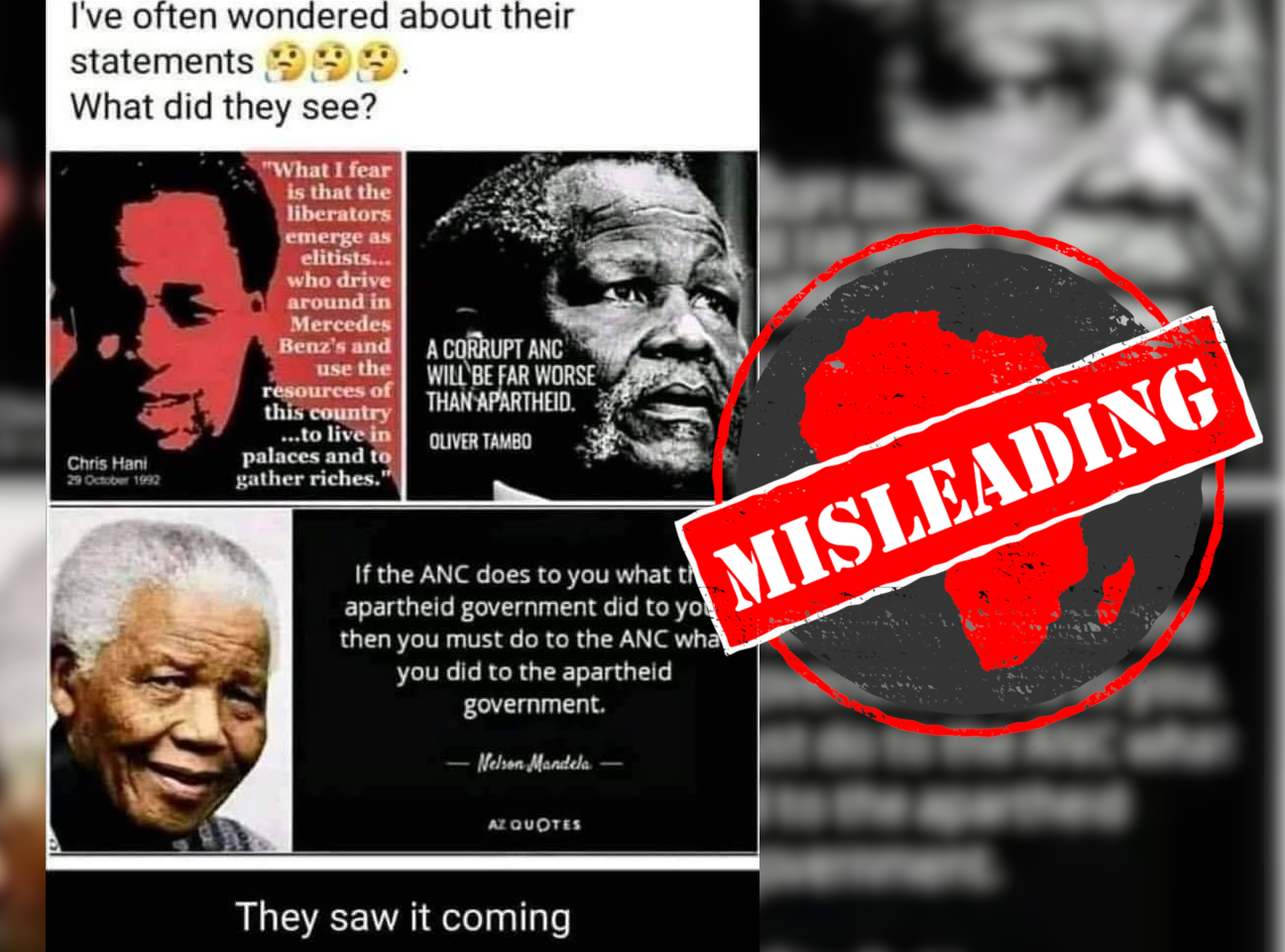 Tambo ‘never, ever, ever’ said ‘corrupt ANC will be far worse than apartheid’

Memes claiming Oliver Tambo, the former president of South Africa’s governing African National Congress, said that “a corrupt ANC will be far worse than apartheid” have spread widely online before.

Tambo died on 24 April 1993, a year before South Africa’s first democratic elections which saw the ANC come to power.

Africa Check investigated the quote in 2019 and found no evidence Tambo ever said anything like it.

A number of people, including biographers and those who knew Tambo personally, told us the quote sounded entirely out of character.

Albie Sachs, the retired constitutional court judge who worked closely with Tambo in the 1980s, said: “He would never have used that comparison, ever, ever, ever.”

This quote has been reproduced many times, and is usually attributed to a speech Mandela made at the fifth national gathering of the Congress of South African Trade Unions in September 1994.

But despite our best efforts we could not find any recording of Mandela saying this in September 1994 or at a special congress held the year before, which may also be when Mandela said the much-quoted words.

Hani did say he feared the ‘liberators emerge as elitists’

The graphic is specific about the quote attributed to Chris Hani, dating it 29 October 1992. This was less than six months before the leader of the South African Communist Party was assassinated.

The quote is: “What I fear is that the liberators emerge as elitists ... who drive around in Mercedes Benz's and use the resources of this country ... to live in palaces and to gather riches.”

This is also widely quoted, but unlike the Tambo and Mandela quotes, which are usually reproduced without any identifying details like date or place, some of those reproducing Hani’s words refer specifically to an interview he did with Afrikaans-language newspaper Beeld on 29 October 1993.

While we could not find a copy of the newspaper, an online search led us to an undated lecture where Hani is quoted in Afrikaans, and a page reference for the interview in Beeld is given.

This Afrikaans citation is very close to how he is quoted here and elsewhere.

The quote attributed to Hani appears to be accurate, but the Tambo quote is false, and the Mandela quote cannot be verified.