An image posted on Facebook in November 2021 seems to show an entrance to Uganda’s Entebbe International Airport with a throng of people moving in and out, some pushing luggage marked with the country’s flag.

A sign above the entrance reads: “WELCOME TO CHINA EBB INTERNATIONAL AIRPORT”. It includes the emblem of the flag of China. EBB is the International Air Travel Association’s code for Entebbe airport.

In 2017 Uganda received a $207 million loan from China’s Export-Import Bank to expand Entebbe airport. The repayment plan was on a 20-year schedule with a grace period of seven years. There are rumours that the Ugandan government has been attempting to renegotiate the terms of the loan.

In late November it was reported that Entebbe International was on the verge of being taken over by China after the Ugandan government defaulted on the loan. The government denied this and has said it will repay the loan.

But has the airport really been renamed China EBB International Airport? 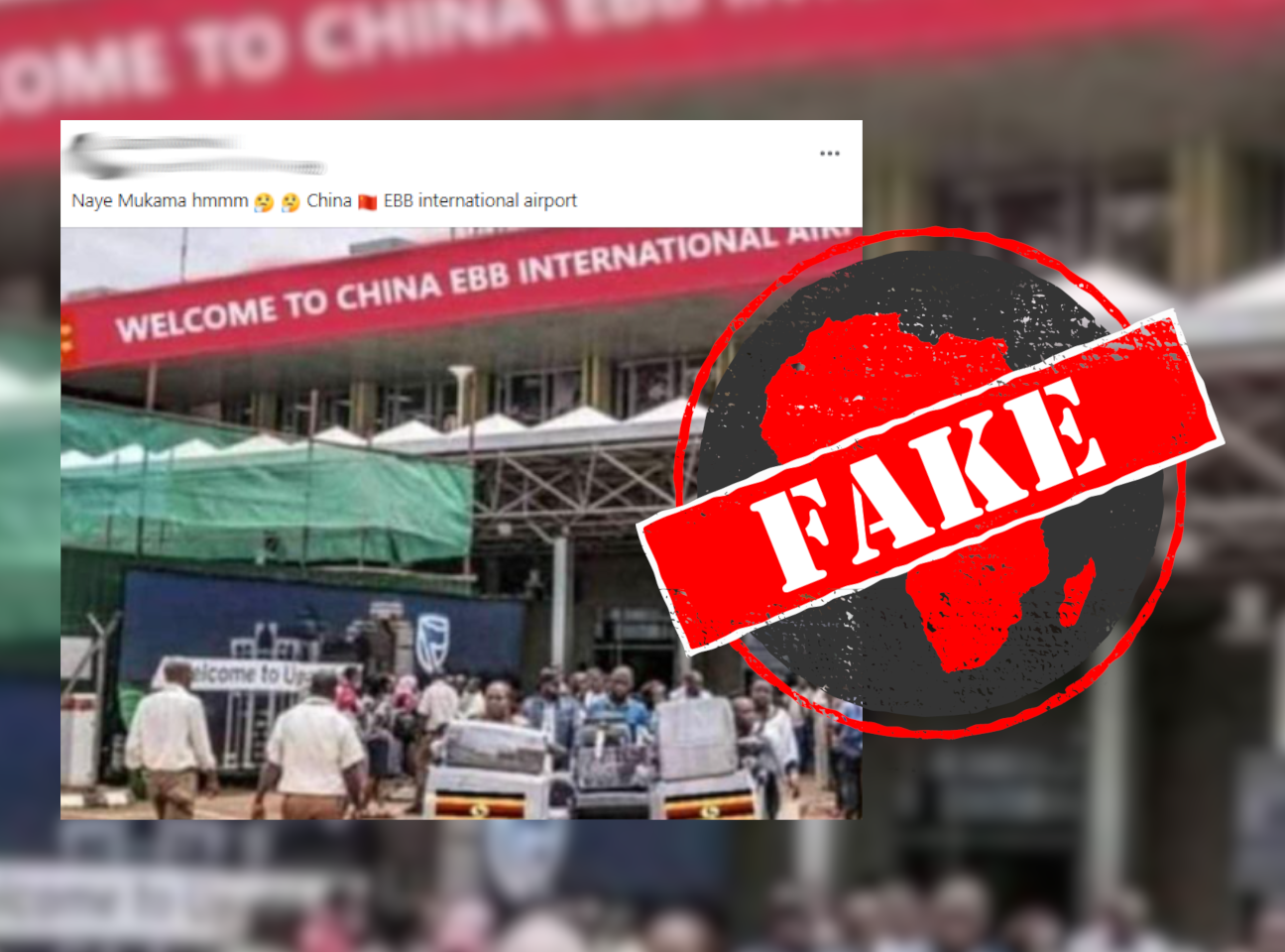 A reverse image search reveals that the image has been doctored.

We found the original photo in a March 2020 article on the CNN website. Here the sign reads: “WELCOME TO ENTEBBE INTERNATIONAL AIRPORT”. There is no Chinese flag emblem on the sign, and no Ugandan flag on the luggage.

The photo is credited to Sumy Sadurni and is also available on Getty Images.

“FAKE IMAGE ALERT: Please disregard the fake/photoshopped image below, which is trending on social media platforms,” the authority tweeted. Local media have also since photographed the airport.

‘It has not happened and is not going to happen’

“Government cannot give away a national asset like an international airport … It has not happened and is not going to happen,” the statement reads.

It adds: “It is true that UCAA opened up a Sales Collection Account in Stanbic Bank where all Authority’s revenues are deposited in line with Escrow Account Agreement terms, but it does not mean that anyone is to control UCAA’s finances.”

The authority also says the government is still “within the 7 year grace period during which only interest is paid, and the government has not defaulted on those obligations”.

The Chinese embassy in Uganda has also dismissed rumours that it is to take over the airport, in a statement on Twitter.

“The malicious allegation that ‘Uganda Surrenders Key Assets for China Cash’ has no factual basis and is ill-intended only to distort the good relations that China enjoys with developing countries like Uganda,” it reads.

🎙️Remarks by the Spokesperson of the Chinese Embassy in Uganda on Some Media Reports Alleging that“Uganda Surrenders Airport for China Cash” pic.twitter.com/BqR3Rw4eKd

No, Lesotho airstrip not ‘a new’ multimillion dollar airport