Yes, mites live in your pores, feed on skin grease and mate on your face

“This is a Face Mite,” reads a message posted on Facebook in South Africa. It shows a repellent photo of a pink worm-like creature with eight fuzz-tipped legs.

“These micro guys live in your pores, feed on skin grease and mate on your face while you sleep. Sweet dreams tonight…”

Facebook’s fact-checking system has flagged the message as possibly false. You might hope it is, but it’s correct. 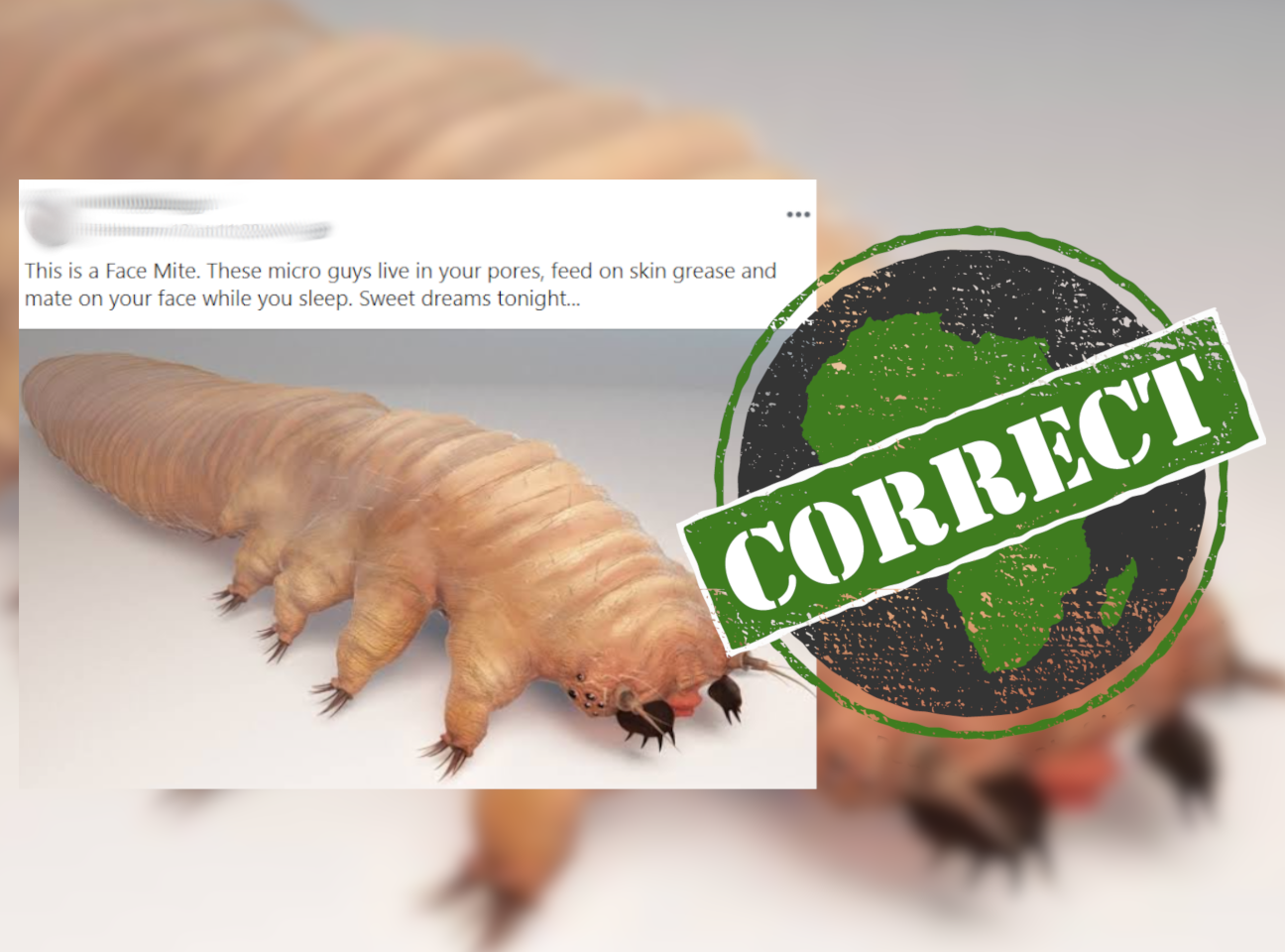 ‘Tiny mites are living on your face right now’

The creature in the photo is the face mite Demodex folliculorum, one of two ectoparasites found on humans. Ectoparasites infest the skin of people and other animals.

“You almost certainly have tiny mites living in the pores of your face right now,” says an article by the US National Public Radio (NPR).

The mites live in just about every person’s eyelashes and on their faces, the article says.

But don’t worry, NPR adds. At about 0.3 millimetres long, the mites are too small to see with the naked eye. “It would take about five adult face mites laid end to end to stretch across the head of a pin.”

Michelle Trautwein, an entomologist at the California Academy of Sciences in San Francisco, told NPR that face mites “look like kind of like stubby little worms”.

An article by the BBC says that under a microscope, these mites appear as though they're “swimming through oil, neither very far, nor very fast”.

Megan Thoemmes of North Carolina State University in Raleigh and her colleagues found that about 14% of people had visible mites, but also found that Demodex DNA appeared on every single face they tested.

This means that it is likely that every person has these mites on their faces, and “probably in quite large numbers”, says the BBC.

“It's hard to speculate or quantify but a low population would be maybe in the hundreds,” Thoemmes told the BBC.

“A high mite population would be thousands.”

Thoemmes also said that “it appears that they come out at night to mate and then go back to their pores”.

They seem to also eat sebum, the greasy oil your skin makes to protect itself and keep it from drying out, says NPR.

This means that the more greasy parts of your face – around the eyes, nose and mouth – would likely have more mites than other parts.

But don’t go out of your way to buy extra-strength face scrub. The mites live in your pores, so you won’t be able to get rid of all of them.