“What is nuclear pasta?” asks a graphic going around Facebook in South Africa.

Beneath an illustration of something that looks like a glowing orb of pasta, balanced on a spoon against star-studded space, is an explanation.

It says: “Nuclear pasta is known as the strongest material in the universe. It is found within the crust of a neutron star. The matter there is so strong, and so heavy that it can be 10 billion times stronger than steel, and a teaspoon of this would weigh 10 million tons!”

Facebook’s fact-checking system has flagged the graphic as possibly false.

So what is nuclear pasta and is it the strongest material in the world? We checked. 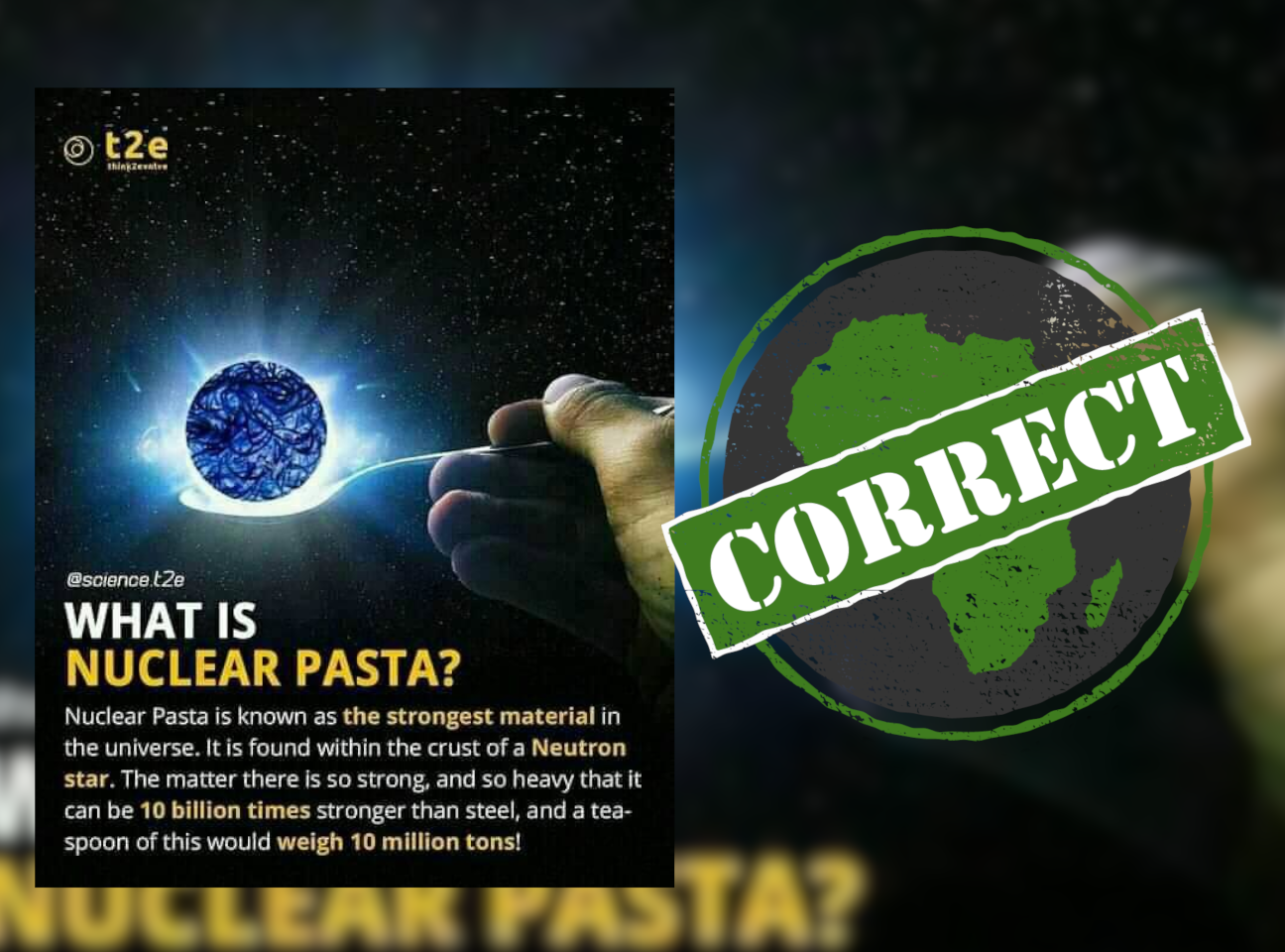 Neutron stars are the result of supernovae – violent, energetic explosions that happen when the iron core of a massive star becomes unstable against gravity.

According to NewCompStar, neutron stars can have a “crust” under a thin atmosphere. An increase of density within the star under the crust will cause the formation of clusters.

These clusters have different shapes due to nuclear and coulomb interactions. And they are called “nuclear pasta” because they look like “the Italian pasta”.

NewCompStar, or “Exploring fundamental physics with compact stars”, is a network bringing together experts in astrophysics, nuclear physics and gravitational physics, to research neutron, strange or hybrid stars. It’s funded by the European Cooperation in Science and Technology, or Cost.

Astrobites, an astrophysics journal aimed at undergraduate students, explains that the characteristics of nuclear pasta are complex, non-spherical patterns “such as tubes, sheets and bubbles” and they resemble various pasta, such as lasagna, gnocchi and spaghetti.

Nuclear pasta one of strongest known materials in the universe

The size of a neutron star where nuclear pasta can be found can be the size of a major city and “a teaspoon of the material inside has the mass of a small mountain on Earth”, according to a 2018 article in the Atlantic magazine.

Matt Caplan, an astrophysicist at McGill University in Canada who studies neutron stars, told the Atlantic that nuclear pasta may be one of the strongest known materials in the universe.

Nova, the US Public Broadcasting Service’s science series, says nuclear pasta is “harder to break than anything in the known universe” and is stronger than steel “by about a million trillion times”.

And Phys.org, a UK-based science, research and technology news organisation, says that nuclear pasta can be “10 billion times stronger than steel”.

The graphic circulating on Facebook is accurate, according to the data available.

[BLOG] The pseudoscience of numerology: treating predictions as facts

Watchdogs, watch yourselves! Why South African media should be wary when communicating pseudoscientific predictions to their audiences.

ANALYSIS: A clash of science and tradition in Nigeria’s healthcare sector

From public buses to social media in Nigeria, herbal medicines are boisterously advertised as miracle cures. They are not short of takers, e...

Is SA bottom of the class in maths and science? WEF ranking is meaningless