Yes, South African rapper AKA tweeted – sarcastically – that WHO paid him R55 million to say he had Covid-19

“I was paid R55 million by WHO,” reads a Facebook post from 13 July 2020. “AKA confesses after people questioned his coronavirus results.”

The post links to an article on the website News365, widely shared on Facebook, that says South African rapper AKA “confessed” that the World Health Organization paid him R55 million to disclose his Covid-19 results.

The article is headed “AKA confesses after people questioned his coronavirus results” and was published on 13 July.

It says rapper Kiernan Forbes, known by his stage name AKA, tested positive for the new coronavirus and announced on Twitter he had been paid R55 million, about US$3.5 million, to publicise his test results.

The post sharing the article has been viewed more than 100,000 times on Facebook. It has also been flagged as possibly false by Facebook’s fact-checking system.

Did AKA admit to being paid by the WHO to publicise his Covid-19 status? We checked. 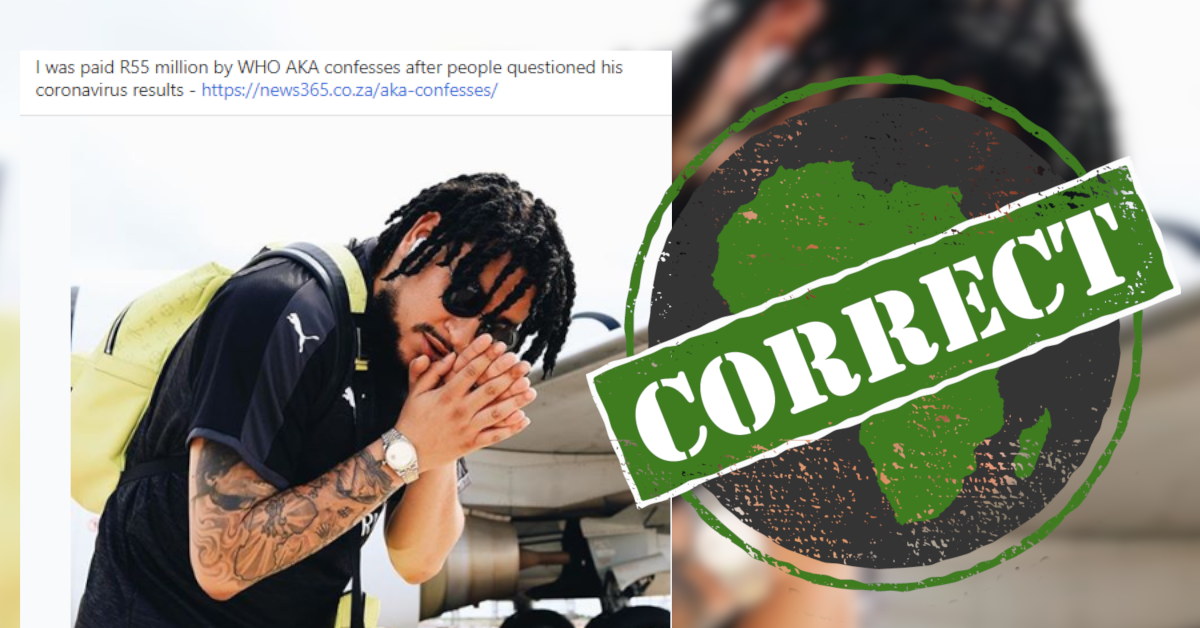 On 10 July, AKA tweeted a press statement announcing that he had tested positive for Covid-19.

He said he was publicising his results to “create awareness around the virus and caution citizens to be more careful in their daily interactions with others”.

He has since recovered, after documenting his symptoms and the medication he used to treat them.

The tweet saying he was paid by the WHO is genuine, posted on the rapper’s verified Twitter account three hours after his announcement: “Ok, sigh ... I can’t keep it up any longer ... it’s true ... I have been paid .... 55 MILLION RAND to go public with my status by the WHO.”

Minutes later he tweeted: “Ok guys there you wanted the number ... there it is. 55 MILLION.”

While the tweets are real, the rest of AKA’s timeline suggests he was being sarcastic. Another couple of minutes later he tweeted: “Me and my fake machine are bored now ... catch you soon on the next episode of ‘Who wants to keep their head in their ass’.”

Other tweets show him responding with sarcasm to people questioning his status and reasons for publicising it.

On 14 July, four days after posting his press statement, he replied to a question asking if he charges R150,000 to perform by saying: “No, I get paid to promote coronavirus apparently.”

But he has also retweeted multiple tweets urging people to take Covid-19 seriously and calling claims that the WHO is paying celebrities an “ignorant theory”.

South African rapper AKA did tweet that he had been paid R55 million by the WHO to publicise his positive Covid-19 results. But his subsequent tweets strongly imply that he was being sarcastic, and didn’t mean to be taken seriously.