“The photo above is the closest humanity has ever come to creating Medusa. If you were to look at this, you would die instantly,” begins the lengthy text in a graphic posted on Facebook on 17 February 2022.

Medusa is a monstrous female figure in Greek mythology who had a head of hair made of snakes. It was believed that anyone who looked directly at her turned into stone.

The graphic is a screenshot of another social media post, possibly from Tumblr. The post includes a black-and-white image of a large blob of an unidentified substance, though the scale of the image is difficult to determine.

The graphic claims the image is of a “reactor core lava formation” called “the Elephant’s Foot” and is found in the basement of the Chernobyl nuclear power plant near Pripyat, Ukraine.

“Oh, and regarding the Medusa thing, this picture was taken through a mirror around the corner of the hallway,” the post continues. “Because the wheeled camera they sent up to take pictures of it was destroyed by the radiation. The Elephant’s Foot is almost as if it is a living creature.”

The graphic is captioned “’Tis the Crawling Chaos”, which would appear to be a reference to a fictional character and short story by early science fiction writer HP Lovecraft.

The post has been viewed over 166,900 times in the US and South Africa since it was first published. What is the context behind this phenomenon and is it true you’d die if you looked at it directly? 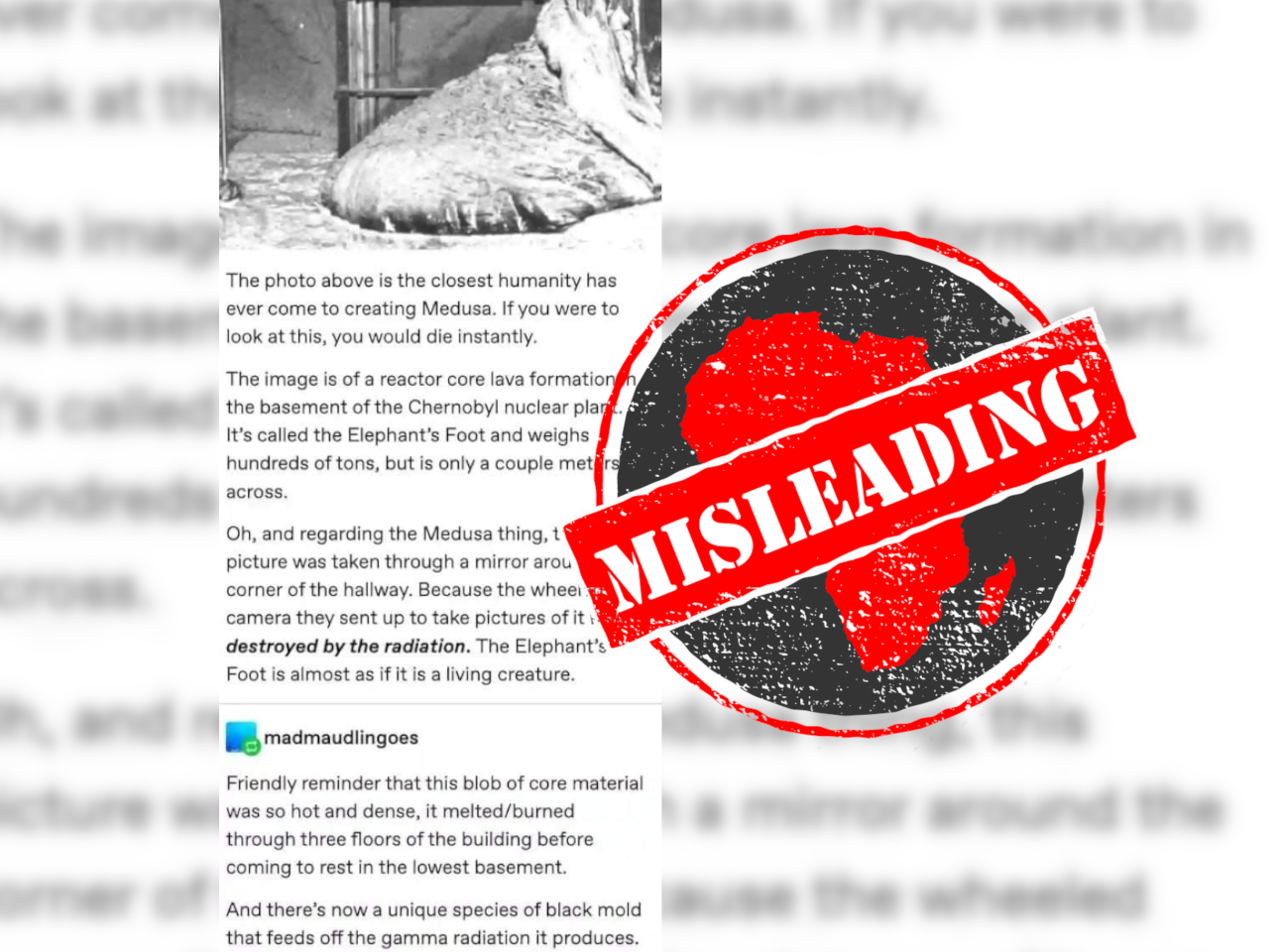 In April 1986 the Unit 4 reactor at the Chernobyl nuclear power plant was destroyed in an accident, eventually killing 30 workers and firefighters, and causing the evacuation of 350,000 people from the surrounding areas.

The disaster is considered the worst disaster in the history of nuclear power generation.

Nuclear reactors are the core of a nuclear power plant. They contain and control nuclear chain reactions through a process known as nuclear fission, where atoms split and release energy. This energy heats water in the reactor, releasing steam, which in turn spins a turbine that creates electricity.

Due to flaws in the reactor design and poorly trained personnel an explosion took place in the Chernobyl 4 reactor during a routine test on 26 April 1986. The nuclear reactor melted, creating radioactive black lava that burned through several floors and solidified in the basement of the power plant.

This lava formation was named the Elephant’s Foot by scientists and is made up of nuclear fuel, melted concrete, and metal.

While the Elephant’s Foot is deadly, it will not “instantly kill” anyone who looks at it as the graphic claims. Soon after the disaster it was estimated that thirty seconds of exposure would cause dizziness and fatigue for up to a week, two minutes of exposure would make cells haemorrhage and four minutes would lead to vomiting, diarrhoea and fever.

Exposure for five minutes was believed to result in death within two days.

The photo in the graphic is real and was taken using a camera on wheels. A photo also exists of a scientist taking a photo of the mass up close but what happened to them afterwards is unknown.

The Elephant’s Foot is still radioactive today. An estimate published in 2013 suggested over an hour of exposure to the mass would still be fatal.