Following protests in South Africa, social media has been flooded with photos and videos showing dramatic scenes of looting, plundered shops and roads strewn with debris.

Two provinces in particular, Gauteng and KwaZulu-Natal, have been rocked by days of unrest. The protests began when supporters of former president Jacob Zuma demanded he be freed from prison, where he is serving a 15-month sentence for contempt of court.

Three photos have been shared on Facebook together, with the claim they all show recent looting in South Africa. Many social media users point out that the people pictured are white, and accuse the media of bias for not reporting that white people are stealing goods.

The first photo shows three people walking across what looks like a parking lot, one of them holding a shop mannequin and another what looks like shoe boxes. This photo is also doing the rounds on Twitter.

The second photo shows four masked people standing at a traffic light, against which are leaning large TVs and a child’s bicycle. One of the men holds what looks like a baseball bat and the other appears to be wearing armour and carries a shield.

The third photo shows people walking in and out of a shop, with armfuls of what look like packaged food. All three photos have also been shared in this Twitter post.

But are these photos from South Africa, during the July 2021 protests? We investigated. 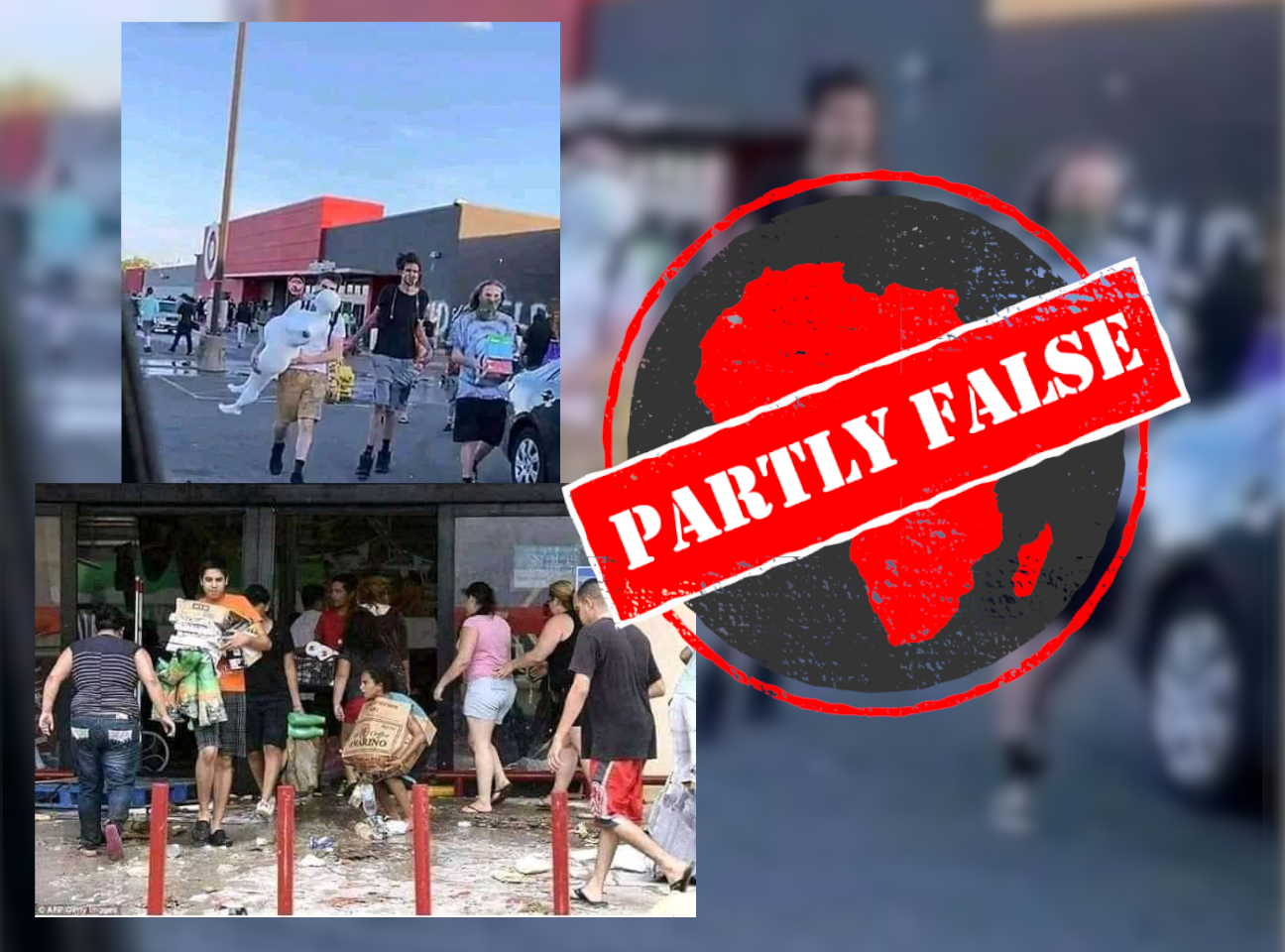 Mannequin looter at Target store in US

If you look closely at the first photo, you’ll notice that the building in the background is painted red and has a logo like a round target on it. This appears to be a Target, a large US retail chain.

Target only has stores in the US. There were reports of Target stores being looted and vandalised in mid-2020 in Minneapolis, during protests following the death of George Floyd, a black man who died when a white police officer knelt on his neck. A large number of Target stores were subsequently closed across the US.

The first photo is almost certainly from those incidents in June 2020, and not from July 2021 protests in South Africa.

Second photo from KwaZulu-Natal, but not looters

The second photo is harder to trace. A Google reverse image search only led to similar unsupported claims on social media as the one we were investigating.

A number of people also pointed out the one man’s shield and armour.

But something in the background of the photo once more gave a clue about where it might have been taken. A large sign says “ZN Cars”, though both ends of the sign are obscured or cut off.

“KZN” is a common abbreviation for KwaZulu-Natal, the province where the protests started. A Google search led us to KZN Cars, a used-car dealership with two branches, one in Pinetown and one in Waterfall, close to the town of Hillcrest.

It is clearly the KZN Cars logo in the photo. We contacted the company, who confirmed the photo was taken near their Waterfall branch during the protests.

They also said the people pictured had not stolen any goods: “The people standing in this photo are just some of the brave members of our wonderful community who were guarding the entrance onto Link Road from the looters. As for the items, those were things that they managed to confiscate from the looters.”

The Waterfall KZN Cars branch is on Link Road.

Looting after hurricane in Mexico

A reverse image search on TinEye of the third photo brought us to the original photo published by Getty Images on 15 September 2014.

According to the caption, the photo shows looting of a shop in San Jose del Cabo, Mexico, after a hurricane “knocked down trees and power lines in Mexico's Baja California peninsula”.

There were reports of looting after the storm and similar photos from the time can be found on Getty Images. This photo does not show South Africa in July 2021.

Visa lottery application to live and work in the US? Beware of another engagement bait scam

‘In search of greener pastures’: Checking five claims about Nigeria’s doctors and the brain drain

A prominent doctor in Nigeria has said thousands of doctors are leaving the country, straining the health sector. We took a closer look.

No, video combines unrelated clips from 2018, don’t show Kenyan DP Ruto getting ‘heroic’ welcome in US in 2022