After the World Health Organization (WHO) announcement of an outbreak of monkeypox, several Facebook posts have suggested that a vaccine against Covid-19 could be the cause.

The posts include images of what appear to be the package insert from the vaccine developed by Oxford University and pharmaceutical company AstraZeneca, highlighting the words “chimpanzee adenovirus”.

We take a look at what monkeypox is and why “chimpanzee adenovirus” appears on the package insert of AstraZeneca’s Covid-19 vaccine. 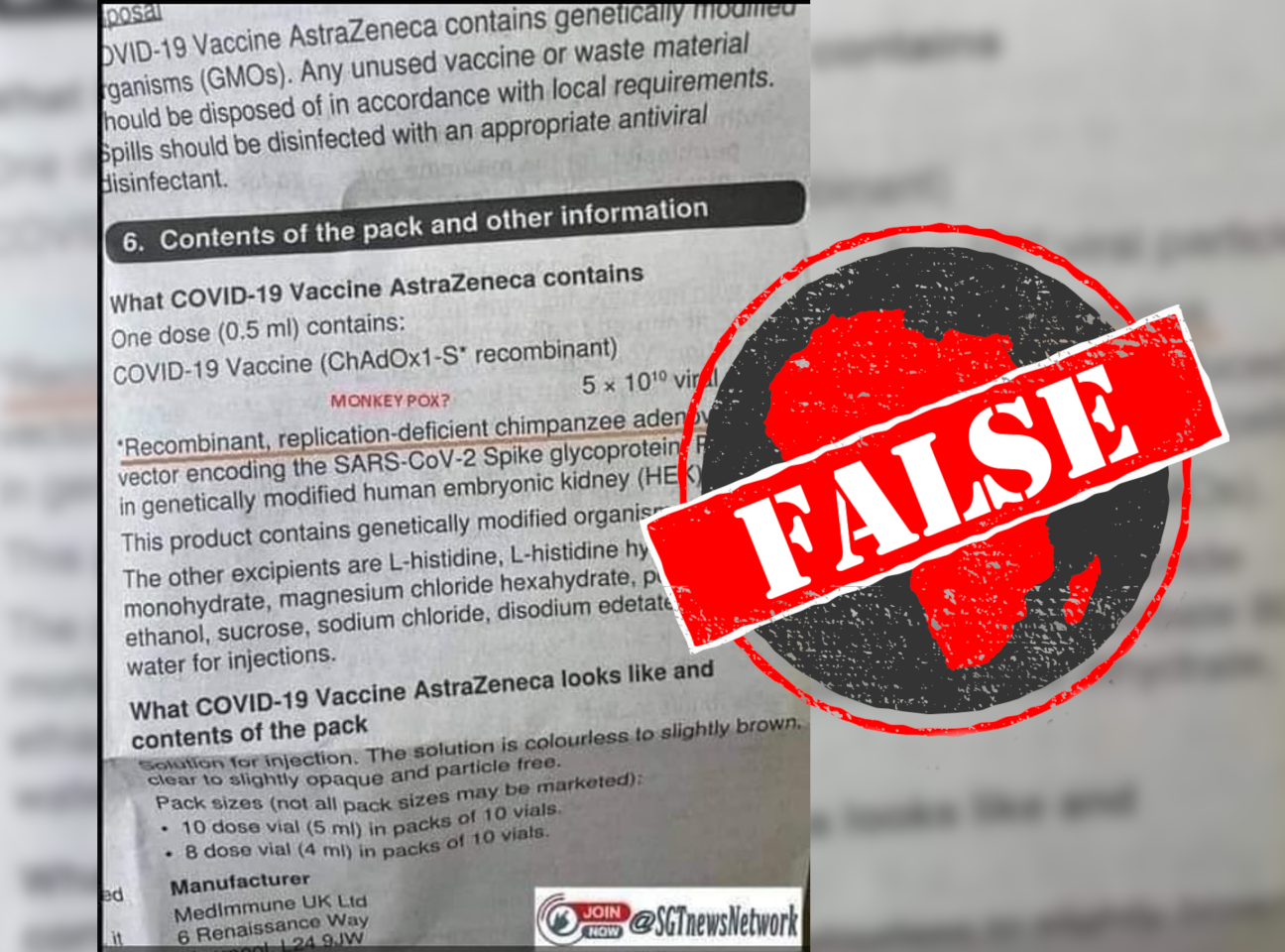 Monkeypox is not a new disease. It causes fever, intense headache, aches and pains, as well as a distinctive rash. According to the WHO, it is transmitted by close contact with infected sores, bodily fluids, droplets and contaminated materials such as bedding. It was first identified in humans in 1970.

Despite its name, it has been found in a wide variety of animals including rodents, such as certain species of squirrels and rats, and primates, a group that includes humans, chimps and monkeys.

But humans and chimps are apes, not monkeys.

Monkeys have tails, narrow chests and other characteristics that humans and chimpanzees don't have. Apes lack tails, but have appendixes and more complex brains than monkeys.

And just as chimpanzees aren’t monkeys, monkeypox has nothing to do with chimpanzee adenovirus.

The virus which causes monkeypox belongs to the family Poxviridae, which also includes the now-eradicated smallpox virus. This is separate from the Aadenoviridae family, which includes viruses that cause pneumonia, certain types of conjunctivitis, and other diseases.

The 2022 monkeypox outbreak has nothing to do with Covid-19 vaccines.

As Africa Check has previously explained, the AstraZeneca vaccine includes an ingredient called ChAdOx1-S. This is a specific form of the viral vector ChAdOx1.

As we said before, ChAdOx1 was created in 2012 and trialled in 2014 with the intention of creating more effective flu vaccines.

In the original human trial of the vector, the authors explained that they used a modified chimpanzee virus because there was widespread resistance to similar human viruses. A vaccine made using a similar human virus as a vector was likely to be destroyed by a person’s immune system before the vaccine could be fully effective.

The chimpanzee virus used to make ChAdOx1 has been altered so that it is harmless and cannot replicate.

Monkeypox not expected to become pandemic

The May 2022 monkeypox outbreak is notable because cases have been identified outside of the 12 countries in which monkeypox is endemic, or widespread.

The 2022 outbreak has been limited mostly to European countries. A WHO spokesperson told journalists that the outbreak was unlikely to become a pandemic.

As of 26 May, the WHO had recorded only 257 confirmed and 120 suspected cases of the disease outside of endemic countries, with no recorded deaths.

This serves as further evidence that the outbreak is not connected to the AstraZeneca Covid-19 vaccine. The organisation Our World in Data indicates that as of 1 June, over 67 million doses of the AstraZeneca vaccine have been administered worldwide.

An analysis of the same data by the New York Times shows that this vaccine has been administered in 184 countries, more than any other vaccine against Covid-19. This is in stark contrast to the monkeypox outbreak, which has been limited both in number of cases and geography.

There is no link between any vaccines against Covid-19 and the disease monkeypox.