‘Behaviours’ football fans must avoid in Qatar during 2022 Fifa world cup? No, graphic not official

IN SHORT: The graphic listing eight “behaviours” to avoid during the 2022 world cup in Qatar – including drinking alcohol, homosexuality, immodesty, dating and profanity – was not produced by Fifa or the Qatari government.

“Qatar welcomes you!” reads the header of a graphic doing the rounds on Facebook in South Africa and elsewhere in October 2022.

It then lists, in English and Arabic, eight “behaviours” people should avoid when visiting Qatar for the 2022 Fifa world cup. The global football tournament will be held in the Middle Eastern country, on the Persian Gulf coast of the Arabian peninsula, from 20 November to 18 December.

“Reflect your respect to the religion and culture of Qatari people by avoiding these behaviours,” the graphic reads.

But is the graphic official, and correct? Should football lovers park the bus on attending the world cup or are these rules just trying to catch you offside? 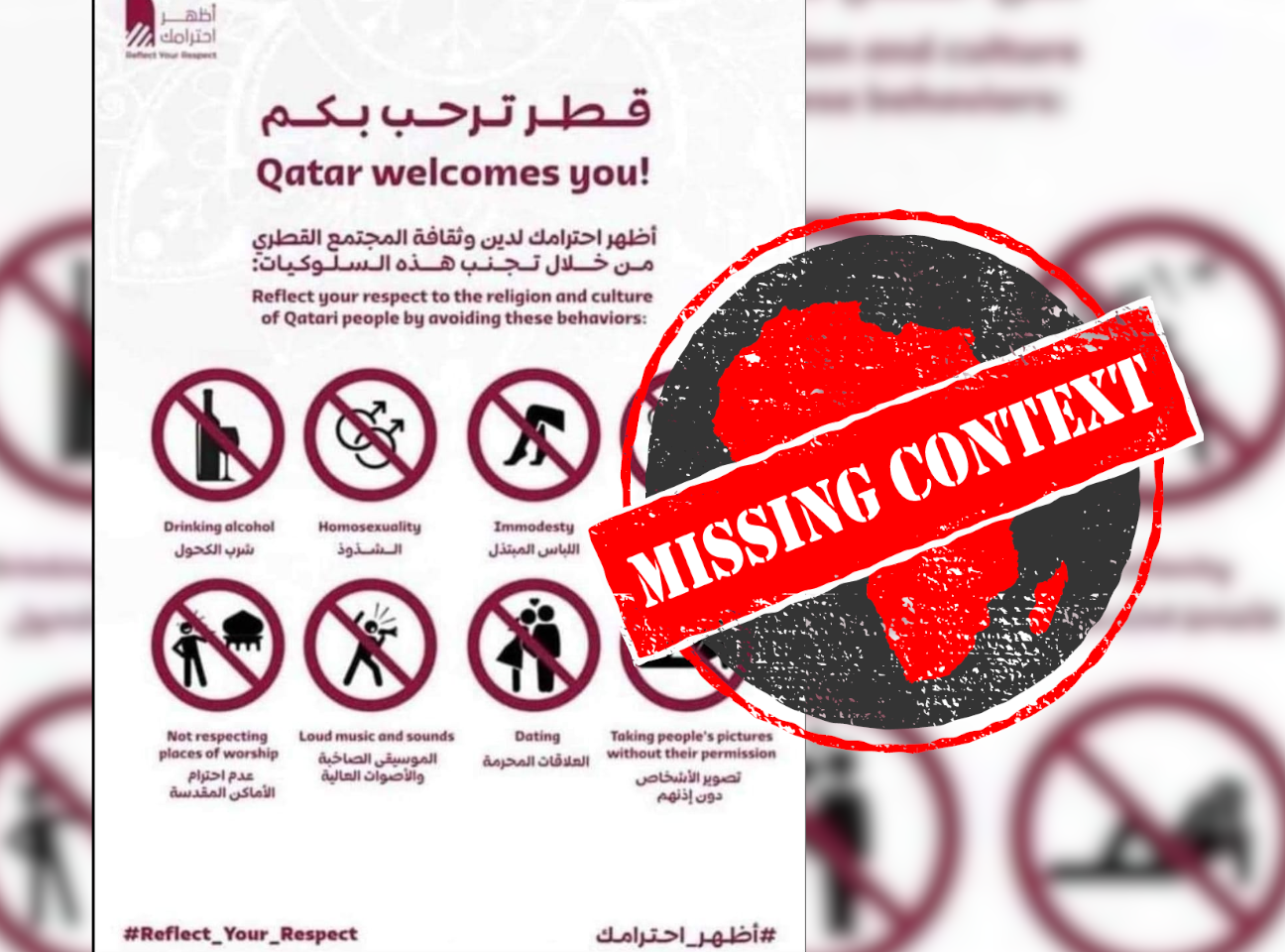 Graphic not by Fifa or Qatari government

A Google reverse image search of the graphic brought us to the Twitter page “Reflect your Respect”, a campaign that aims to “contribute to the consolidation of Islamic values which supports the Qatari identity”.

Qataris are largely Sunni Muslims, and Islam is the country’s official religion.

The graphic was not published by Fifa, or the Qatari government. A Fifa spokesperson told Reuters that it was not an official world cup document.

But do its rules apply to football fans visiting Qatar for the tournament?

Alcohol only inside stadiums

Alcohol is forbidden in Islam.

According to Hukoomi, Qatar’s e-government website, citizens (and tourists) are not allowed to drink alcohol in public. “The law punished going out drunk in public and disturbing others,” Hukoomi says.

The law also doesn’t allow alcohol to be brought through Qatar’s airports.

But world cup ticket holders will be able to buy alcohol “in select areas” in the perimeter of stadiums before kick-off and after the final whistle has been blown, the BBC reports. But in the stadium bowl itself, only soft drinks and non-alcoholic beer will be served.

Alcohol will also be available in a fan zone with a capacity for 40,000 people in Doha, the capital.

There has been controversy about Qatar’s laws targeting the LGBT+ community. Homosexuality is illegal in the country.

At a press conference in Germany, Qatar’s emir Sheikh Tamim Bin Hamad al-Thani was asked whether “homosexual German guests” would be welcome in Qatar, or “do they have to stay home”?

“Everybody is welcome in Doha,” he answered.

He added: “But also we expect and we want people to respect our culture.”

The Guardian reports that LGBT+ couples will be able to hold hands without persecution in Qatar, and rainbow flags will not be confiscated “as long as supporters do not disrespect the local culture by draping them over mosques”.

We could find no evidence of any rules against dating, but Qatar is strict on public displays of affection.

According to the United Kingdom’s government, public intimacy between men and women, including teenagers, could lead to arrest.

Dressing modestly is also expected when travellers want to visit certain facilities such as government buildings and some malls, the UK government advises.

Hukoomi says women do not have to cover their hair in public, but are expected to do so when visiting mosques.

No photos without permission

Qatar’s e-government site explains that people visiting the country should avoid taking photos of, or filming, military installations – and other people – without permission.

Journalists taking photos in the country also need to apply for a press card from the Qatar News Agency.

We could find no evidence that loud music and sounds are strictly prohibited in Qatar during the world cup.