The Facebook page “SAPS Learnership 2021“ regularly posts fake job ads to scam unemployed people. It uses the name of the South Africa Police Service and has an SAPS application form as its profile photo.

The page was created on 3 January 2021 under the category “Musician/Band” and is managed by a single person in South Africa.

Its most recent job scam, posted on the page on 28 February, claims that “SAPS IS LOOKING 314 YOUNG UNEMPLOYED” (sic).

The post has generated more than 1,000 likes and 500 shares so far. It tells users to comment “Help” to get more information, and includes a link to where they can supposedly apply.

But the link doesn’t go to an official SAPS website. Instead, it directs to a blog page titled “Local Vacancies Updates”. And there is no information on the 314 SAPS jobs on the page.

Africa Check sent a message to the verified SAPS Facebook page asking about the job advert. The response was: “It is fake, there are no posts at the moment.”

A notice on the official SAPS website warns about job scams like this. It says the public should “bear in mind that they can view existing vacancies and obtain the official application forms from the official website of the SAPS www.saps.gov.za. Only the information that is on this website can be regarded as authentic.” 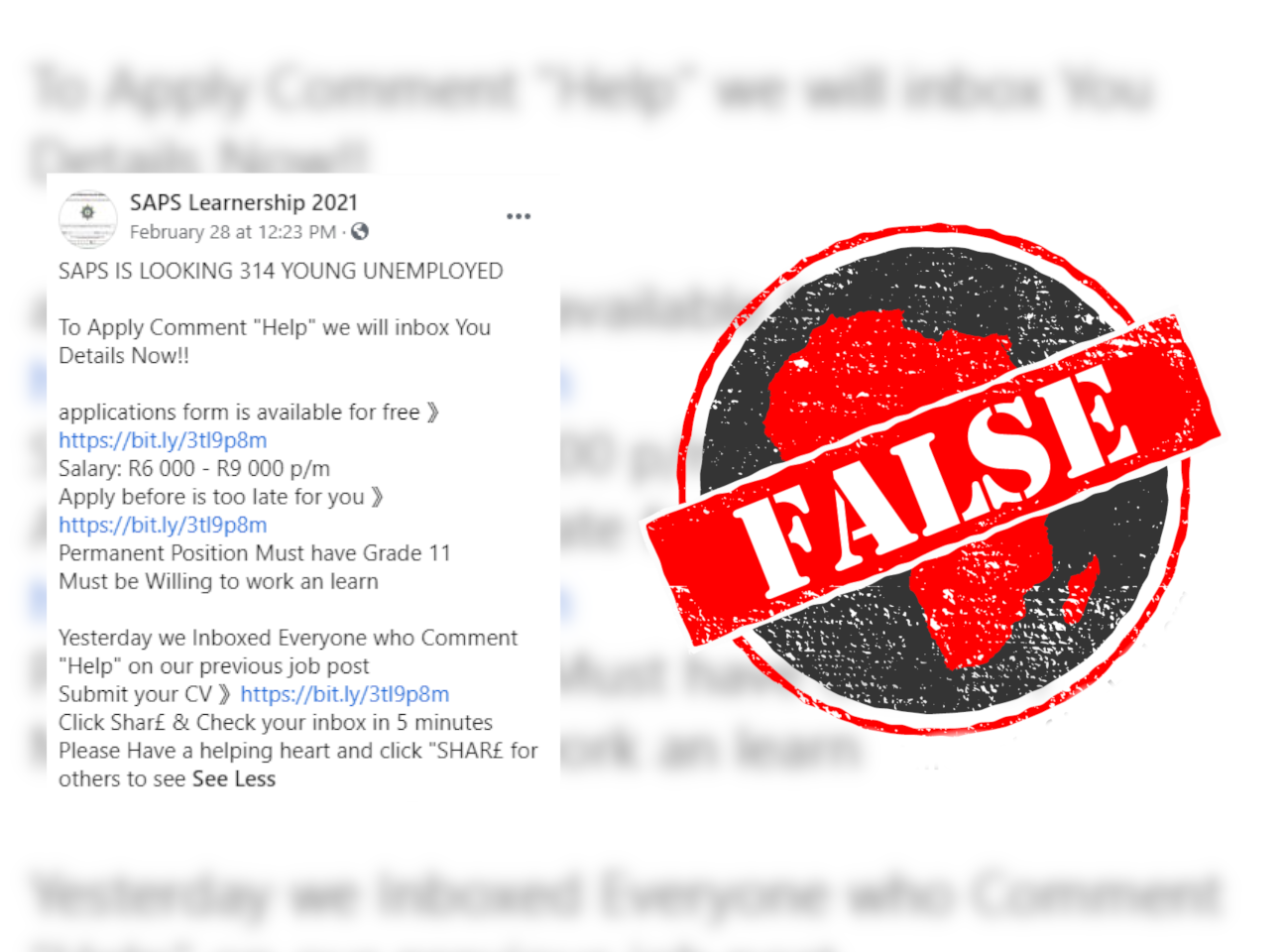 Signs of a scam

The “SAPS Learnership 2021” page shows many of the signs identified in Africa Check’s guide to Facebook scams and how to spot them.

First, the posts on the page are badly written. There are numerous spelling and grammar mistakes, which is unprofessional and unlikely in any legitimate job ad.

Second, the posts all link to the same website, unrelated to any of the companies supposedly hiring. It is also an unprofessional-looking basic blog, unlike most legitimate career portals.

And third, the posts ask job seekers to comment “Help” to receive more information. This is an example of engagement bait. The more people comment on posts, the greater the Facebook page’s reach.

‘Does not advertise jobs on social media’

Aside from the SAPS, the Facebook page also posts fake ads for jobs at other organisations and companies.

One is the Johannesburg Metropolitan Police Department (JMPD), in a post offering 500 jobs. It links to another Facebook page titled “JMPD Recruiting 1500 Cops”, which was also created in January 2021 under the “Musician/Band” category and is presumably also a scam.

The JMPD has previously warned that “all legal JMPD adverts will appear in daily newspapers and not on social media”.

Another “SAPS Learnership 2021” ad offers jobs at Pep Stores. But Pep has previously said that it does not “advertise any job opportunities on Facebook”, instead directing people to its careers page.

The “SAPS Learnership 2021” page’s only activity is to post scam job offers. It has not posted about anything else since its first post on 3 January 2021.

Naivas supermarkets in Kenya conducting mass recruitment in 2022? No, beware of another scam