“We don’t want your DO mentality. Ichung’wa tells Gachagua,” reads the headline on a graphic circulating on Facebook in Kenya since May 2022.

It shows a photo of Kenyan parliamentarian Kimani Ichung’wah, and the logo of Nation, a major online news outlet. A QR – quick response – code appears at bottom right, presumably to take users to the full story on Nation.

Rigathi Gachagua is the running mate of William Ruto, the current deputy president and one of the two top candidates for the presidency in Kenya’s August elections. Ruto’s rival is Raila Odinga.

Longer text below the graphic’s header reads, in quotation marks: “Rigathi Gachagua’s DO mentality will not intimidate some of us. William Ruto’s choice is our choice and we have settled on a man respected across the country, Prof Kithure Kindiki.”

It continues:  “We cannot go to the election with a cantankerous, shabby and foul-tongued man like Gachagua who believes in buying people. Gachagua lacks credibility. His many court cases are a burden to the DP. Kenyans will accuse us of launching a corruption ticket. It is Kindiki or nothing for us.”

The implication is that Ichung’wah said this.

Ichung’wah is a member of Ruto’s United Democratic Alliance (UDA). The graphic plays up the history of district officers as the face of repression under the old provincial administration. Gachagua has pending corruption cases in court and is reportedly abrasive.

Prof Kithure Kindiki is a Kenyan senator who lost a bid to be Ruto’s running mate – and deputy president if he wins – to Gachagua.

There were reports of a fallout in the UDA when Ruto picked Gachagua over Kindiki.

But did Ichung’wah really dismiss Gachagua’s “DO mentality” and describe him as “cantankerous, shabby and foul-tongued”? And did Nation produce a graphic quoting him? We checked. 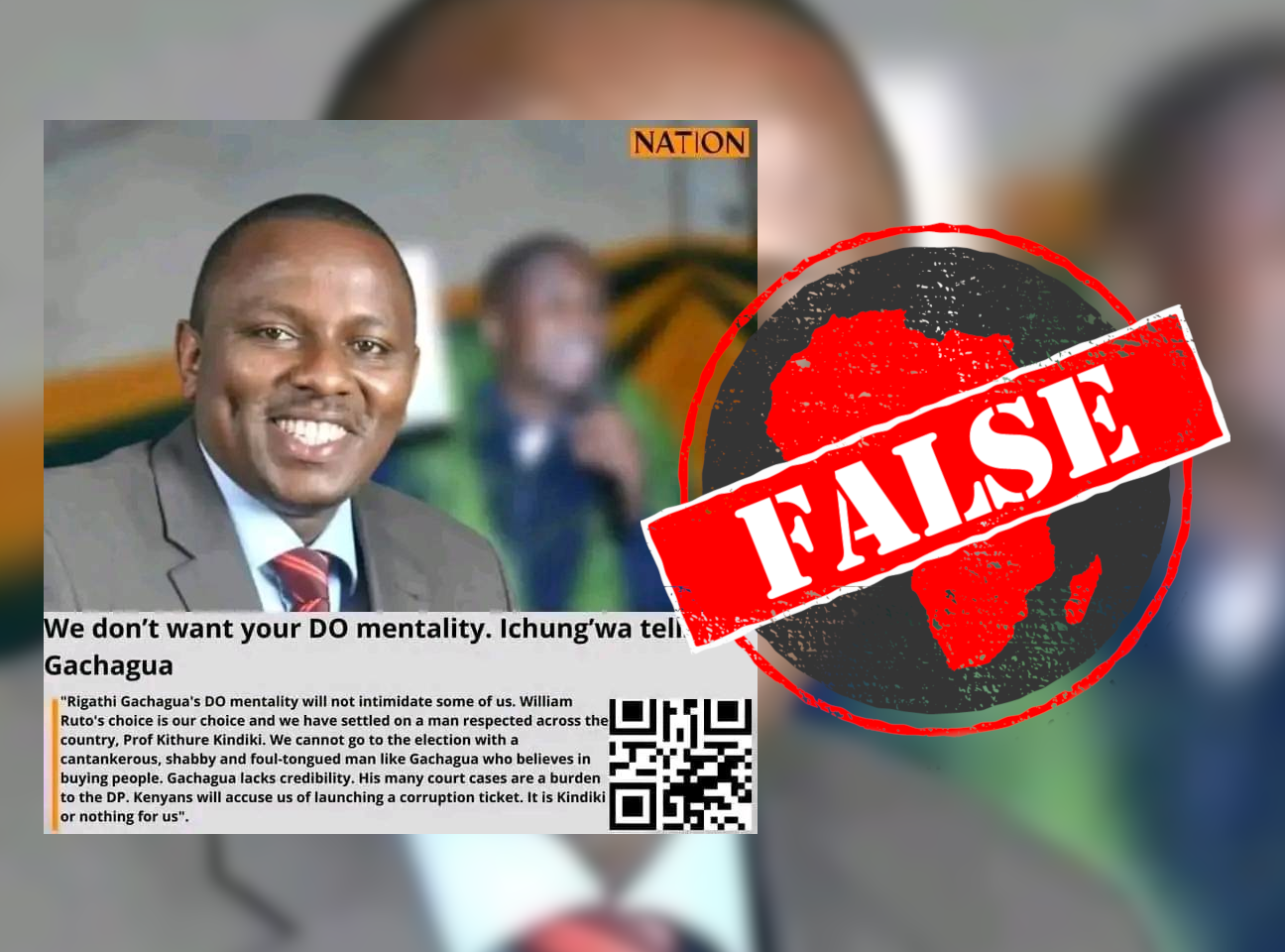 A scan of the graphic’s QR code leads to an unrelated Nation article from April 2022.

“These assmio bloggers should use their time to deal with their collapsing Tower of political Deceit. Kenya Kwanza is intact,” he tweeted.

Nation posted a warning on Facebook that it had not produced the graphic – which it also stamped as “FAKE”.

“FAKE NEWS ALERT! Please be advised that this card doing rounds on social media is fake. Do not fall for fake news,” the post reads.