A message going viral in Nigeria and South Africa tells a heartbreaking story of child suicide.

It begins: “11 year child left a suicide letter as a birthday gift to his mother.”

The child is identified as a boy, and his letter quoted at length.

“On today’s special day, I want you to be the happiest parent ever. You always tell me everyday that happiness left you the day I was born. You told me dad left because of me. So today, I want to change things.

“I want you to be very happy and live as if I never existed. You told me you’d never look at me with love, but always loved you and I admired you as the best mom on earth. I hope one day you will think of me, I hope in heaven you will finally hold me and kiss me. The best gift I could give you is leaving your life as you always told me you wished I was never born. I love you mom. Happy birthday.”

The message includes a photo of a funeral: a crowd of people standing around a white casket with gold trim next to a pile of upturned earth.

But it doesn’t give any details, such as where or when this happened. So what does the photo really show? And what’s the story behind the story? 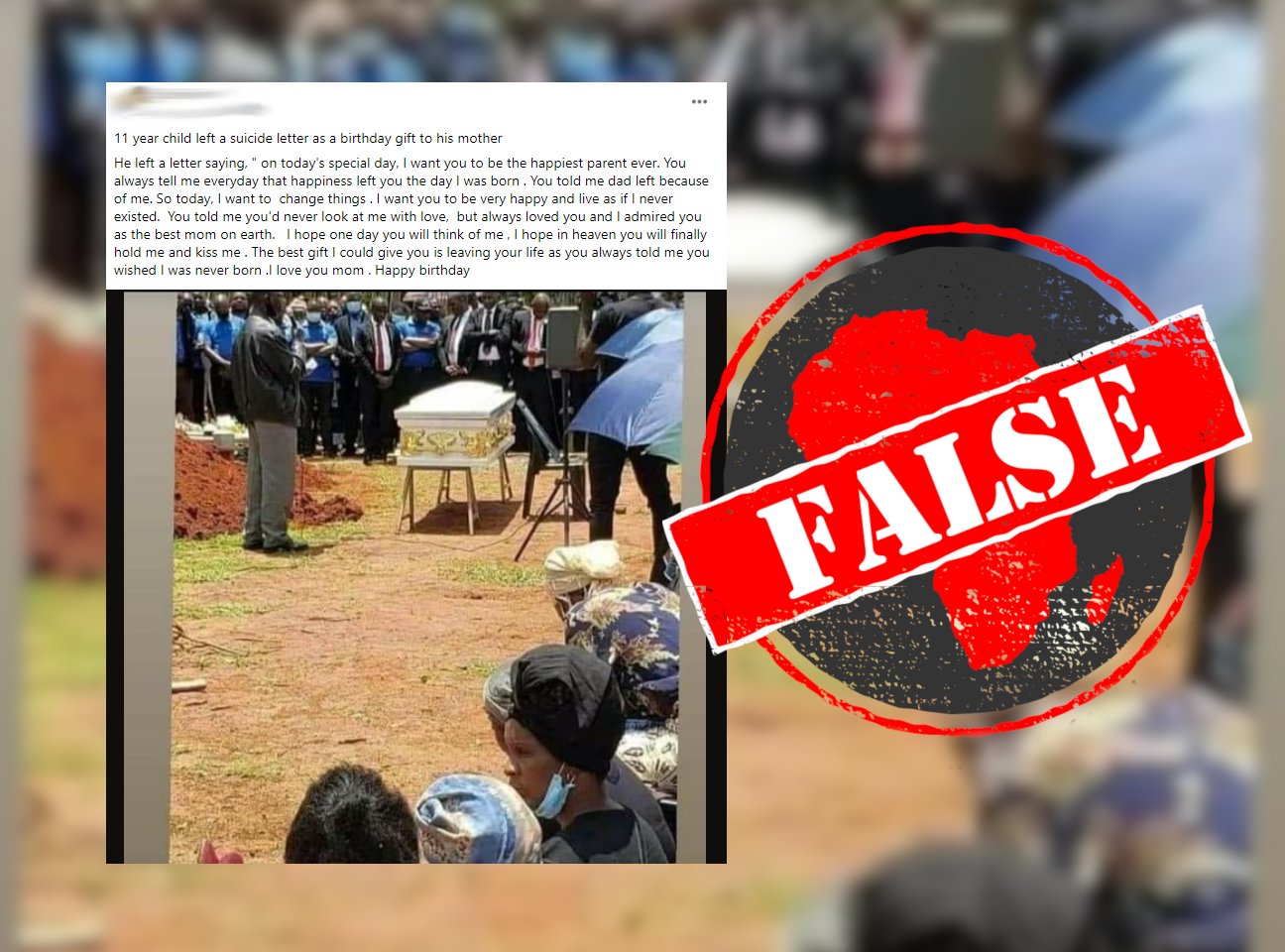 A Google reverse image search of the photo returned many similar versions of the message on websites and blogs, but eventually led to a post on the “Zambia Daily Times” Facebook page, dated 26 December 2020.

It includes the same photo of a funeral, alongside two photos of a man.

“Murdered state prosecutor Nsama Nsama who was shot dead by the police on Wednesday has been put to rest at Memorial Park in Lusaka,” the post reads.

Several news reports and a statement by Zambia‘s minister of home affairs confirm that Nsama and another man, Joseph Kaunda, were shot dead near the Zambia Police Service Headquarters in Lusaka, the country’s capital, on 23 December 2020. The shooting occurred during a standoff between police and supporters of the United Party for National Development opposition party.

The men’s deaths were investigated by Zambia’s Human Rights Commission.

Nsama’s funeral was on 26 December 2020, at Memorial Park in Lusaka. The photo can be seen in a report on the funeral by Zambian Watchdog, an online news service run by local journalists. Lusaka Times ran a gallery of photos of the funeral, where the same crowd, setting and white casket with gold trim can be seen.

The photo does not show the funeral of an 11-year-old boy who died by suicide as a birthday gift to his mother.

And did that tragic incident really happen?

A Google search for “11 year child left a suicide letter as a birthday gift to his mother” reveals that the story has been doing the rounds online, across many countries, for years. The details change but the basic narrative is the same.

One version from 2020 claims an 11-year-old boy died by suicide as a Mother’s Day – not birthday – gift to his mother. Yet the wording of the suicide note is almost exactly the same.

Another, published on Kenya Insights in September 2020, places the suicide in Kenya, and does give details: the names of the mother, the child, the child’s school and more.

But it quickly adds: “This theory was yet to be authenticated but has already flooded the social media platforms ...” And, again, the suicide note is the same.

Further searching led us to an article by the Daily Mail, a British tabloid, published on 9 January 2019. But here the child is a 10-year-old girl from Mexico.

“Mexican girl, ten, ‘kills herself’ next to note saying her death would make her mother ‘the happiest woman in the world’,” the headline reads. Sound familiar?

The article says the girl, “named only as Evelyn Nicole N”, died on 6 January 2019 in Aguascalientes, Mexico.

The Daily Mail quotes the suicide note: “Dear Three Kings, I only want to ask you my mum will be the happiest woman in the world after I will not be here any more as I am only a pain and a ruin in her life since I was born, as I was the reason my dad left our house.”

It goes on in the same vein, all very similar to the message circulating in 2021. The article even includes a blurry photo of the supposed suicide note, conveniently unreadable.

‘No message was found at the home’

The Daily Mail is the largest tabloid in the UK, but its stories are not always accurate. So we dug a little further.

These reveal that a 10-year-old girl did die in Aguascalientes, a state in north-central Mexico, in January 2019. But the death was on 4 January – not 6 January, Three Kings Day. While one report says the death was by suicide, the other suggests it may have been murder.

Importantly, both reports stress that rumours she had left a suicide note were false.

“A minor made the decision to end her life in the municipality of Cosío, Aguascalientes, and four days after the fact, her death has been the cause of fraudulent misrepresentations for the victim and her family,” reads a machine translation of an 8 January 2019 report by SDP Noticias. (The emphasis is from the original.)

“Through various media and social networks, an alleged posthumous message circulates in which the minor would have listed the reasons behind her decision, however this is not real.”

SDP Noticias quotes an Aguascalientes attorney general’s office source as saying: “The first agent that arrived at the site confirms that no posthumous message was found at the home.”

The SDP Noticias report ends with a call for ethics in news reporting.

“The misrepresentation of the causes behind the death of the minor ‘seriously affects the dignity of the girl and her family, because it encourages social lynching’, said Juan Martín Pérez García of the Network for Children’s Rights in Mexico.

“‘It is a principle of journalistic ethics to verify the information and an editorial responsibility to not spread this false news and upload images of the dead girl,' he added."