As sentiment against migrants from elsewhere on the continent rises in South Africa, posts circulating on social media in February 2022 claim the law allows citizens to arrest “drug dealers” in areas associated with migrants.

The posts include a screenshot of text headed “Citizen’s Arrest”.

It reads: “Any private citizen may execute an arrest without a warrant on a person who commits or attempt [sic] to commit a schedule 1 offence. A South African citizen may also arrest anyone attempting to escape lawful custody.”

The screenshot doesn’t mention “drug dealers” or migrants, but it’s circulating with captions that do.

“We can now go to SunnySide and Hillbrow to arrest drug dealers,” reads one Facebook post. The problems in certain South African suburbs – including Johannesburg’s Sunnyside and Hillbrow – are perceived by some to be the fault of migrants.

Another, longer post reads: “As received: ‘We don't need a warrant to enter Hillbrow buildings to arrest criminals. SAPS and Africa Diaspora Forum must read this law.’” It adds that people are “reclaiming their towns from illegal foreign drug lords and criminals”. A shorter version appears on Twitter.

And a recent poll posted on Twitter asks: “Can South Africans conduct CITIZENS ARREST on ILLEGAL IMMIGRANTS? * IF YES how do we go about it. #PutSouthAfricansFirst #OperationDudula #Rosettenville.”

Can South Africans conduct CITIZENS ARREST on ILLEGAL IMMIGRANTS?
* IF YES how do we go about it. #PutSouthAfricansFirst #OperationDudula #Rosettenville

The hashtags #PutSouthAfricansFirst and #OperationDudula have increasingly trended on social media in heated conversations about migrants.

But where does the screenshot come from? And does it and its captions really mean South African law allows citizens to arrest people they suspect of being drug dealers or migrants, without a warrant? 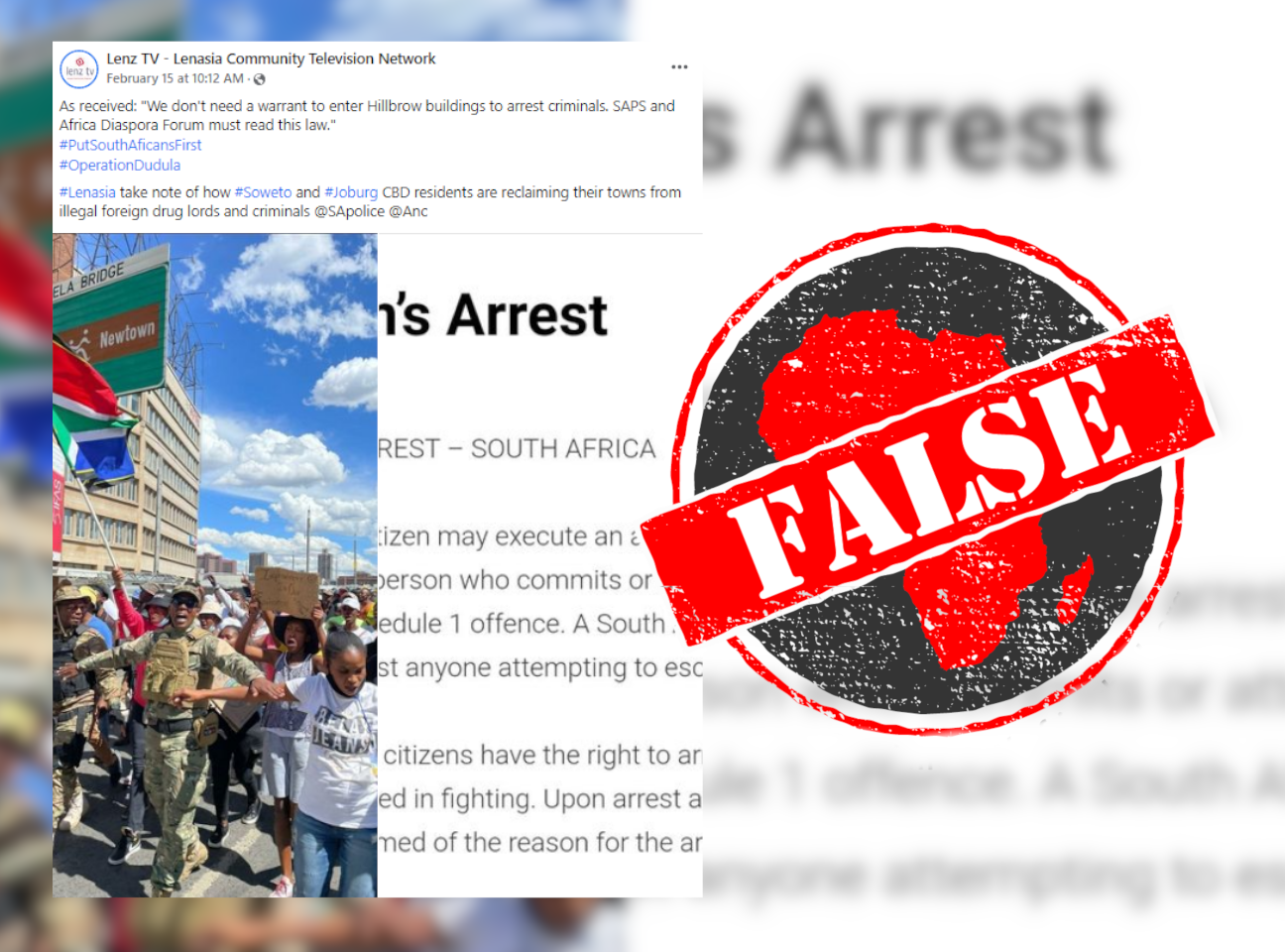 The screenshot headed “Citizen’s Arrest” is more than seven years old. It was posted on the anonymous blog Crime in South Africa on 16 February 2015.

A citizen’s arrest is an arrest by an ordinary member of the public instead of by a police or other officer of the law. It is not a formal term in South African law, but the country’s Criminal Procedure Act does allow for this kind of arrest.

Section 42 of the act allows for “any private person” to arrest (without a warrant) any other person in one of the following cases.

This excludes many of the scenarios with which the screenshot has been shared. All drug-related crimes are schedule 2 offences, and people suspected of those offences can’t be arrested by a private person without a warrant – a citizen’s arrest.

Could be sued for unlawful arrest

The one case in which the act would allow a private citizen to “enter Hillbrow buildings to arrest criminals” would be if the person owned the building where a crime was committed.

Marlise Woolridge, an attorney and criminal law specialist at Stegmanns Incorporated, told AFP Fact Check: “We would certainly not advise a civilian to arrest a suspected drug dealer unless called upon by a police officer or a member of a community policing forum to assist in arresting a person.”

Woolridge added that a person could be sued for making an unlawful arrest.

According to the Criminal Procedure Act, a “peace officer” – a “magistrate, justice, police official, correctional official” – may, without a warrant, arrest someone “reasonably suspected of being a prohibited immigrant” or otherwise having contravened a law regulating their entry to or residence in South Africa. But this too is not a schedule 1 offence, and is not grounds for a private citizen to make an arrest.