Russia has performed the first autopsy on a Covid-19 victim, claims a message posted on Facebook in Afrikaans, and found that the disease is caused by an irradiated bacterium, not a virus.

This roughly translates as: “Russia has been the first country in the world to carry out an autopsy (a post-mortem investigation) on a Covid-19 corpse. After a thorough investigation, it was discovered that Covid-19 does not exist as a virus, but rather as a bacterium that is exposed to radiation and causes the death of people through blood clotting.”

It says its information comes from the Russian ministry of health, but does not link to any official source.

The message also claims that the disease can be cured by antibiotics, anti-inflammatories and the common painkillers aspirin and paracetamol.

But none of this is true. The post is nearly identical to a version that spread on social media in May 2020 and has been thoroughly debunked. 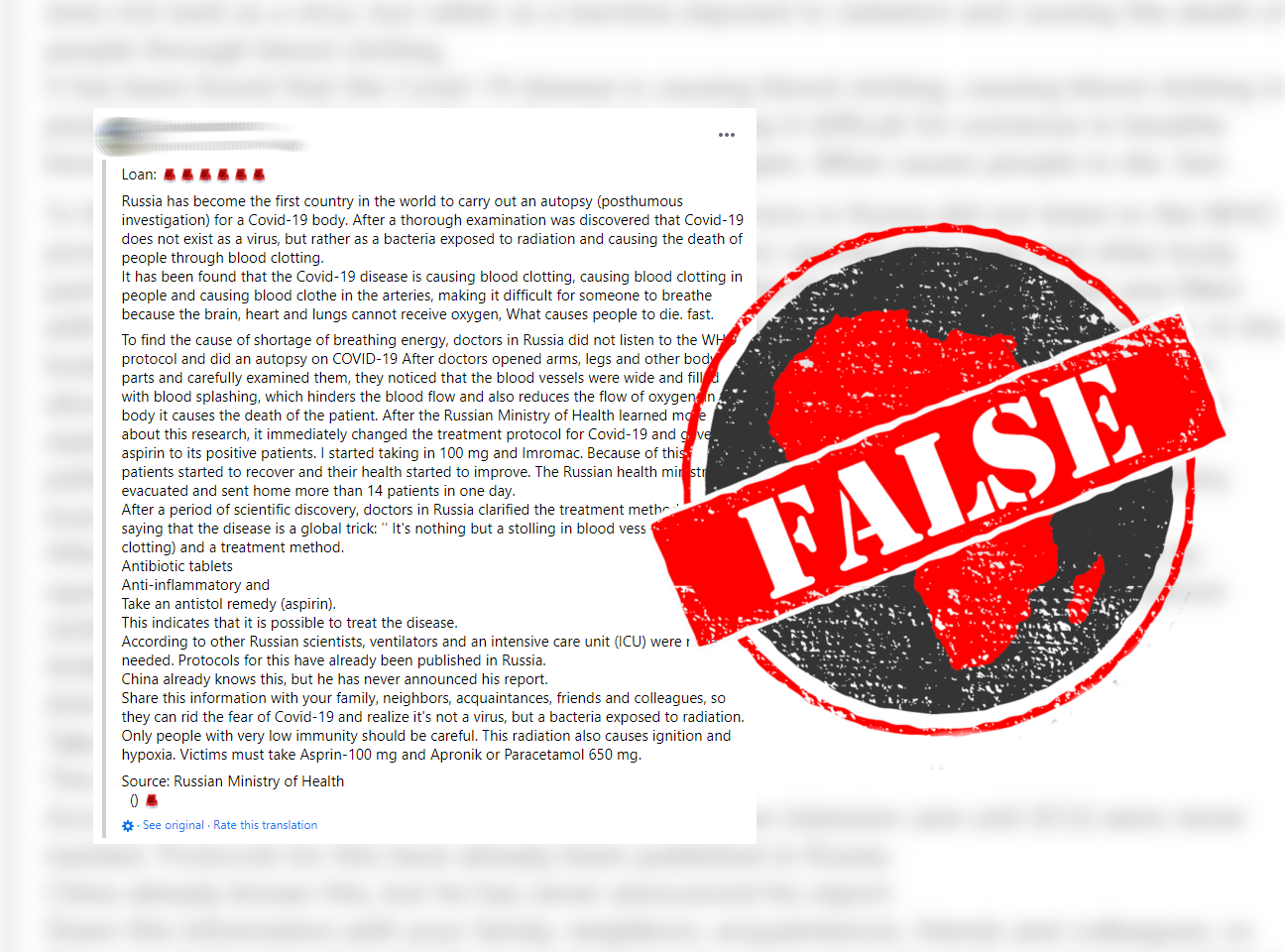 In May 2020, Africa Check debunked a message claiming that “the coronavirus remedy was finally found” in Italy. It said Italian doctors had autopsied a Covid-19 patient, to find that the disease was caused not by a virus but a bacterium, and that it could be treated with aspirin.

Even at that time, many autopsies had been performed on Covid-19 patients. Russia has not recently performed the first one, and none of the autopsies have indicated that Covid-19 is caused by a bacterium.

We also noted that some versions of the message had been shared and debunked in several countries, including France, Italy, Spain, Germany and Ireland.

So how do we know that Covid-19 is caused by a virus?

Both viruses and bacteria can cause disease, although they act in different ways. Viruses are tiny bundles of genetic material enclosed in a protein coat. They only reproduce by hijacking the cells of other organisms such as animals and plants – even bacteria. Bacteria are living single-celled organisms that reproduce by themselves.

Covid-19 is caused by a virus named Sars-CoV-2. It is one of several viruses called coronaviruses because of their crown-like shape (“corona” is Latin for “crown”). Sars-CoV-2 has been identified and even photographed many times, and the entire genetic sequence of the virus has been repeatedly recorded and published, even as it has changed and produced new variants over the course of the pandemic.

Importantly, because bacteria are living things they can be killed by antibiotics. (The name “antibiotic” is derived from French words roughly meaning “against” and “of life”.) Viruses, on the other hand, cannot be treated with antibiotics. The usual defence against viral diseases is vaccination, which minimises the chance that a person will contract a disease by training their immune system to recognise and destroy a particular virus.

So antibiotics can’t treat Covid-19, and painkillers like aspirin will not vaccinate you against the disease.

But if someone does contract a viral disease, the symptoms of that disease can be managed so as to prevent death or severe illness. Could drugs like aspirin help manage Covid-19 symptoms?

When we last tackled this claim we explained that, according to the British National Health Service (NHS), daily low doses of aspirin are sometimes recommended to thin the blood and prevent heart attacks and strokes.

We also noted that blood-thinning medications were being considered as possible Covid-19 treatments because of the association between Covid-19 and unwanted blood clots. But no large-scale clinical trials had yet been done to suggest that this should become a standard method for treating the disease.

The United States National Institutes of Health made similar recommendations, advising people who already take blood-thinning medication to continue doing so even if they are diagnosed with Covid-19. But the NIH did not recommend aspirin or any similar medication as a preventative measure.

The most effective way to avoid contracting Covid-19 is to be vaccinated against the disease. Otherwise, wear a mask, avoid close contact with other people and wash your hands regularly.