Covid kits only distributed in one Indian state, not cause of national decline in cases

According to a graphic widely shared on Facebook, the Indian government is distributing a “home Covid kit” at a relatively low cost, while “the world is in a vaccine frenzy”.

This roughly translates to: “Just look at what India is doing for Covid treatment, while the world messes around and wastes time, and just look at the price.”

In the graphic, above two photos of a blister pack of assorted pills labelled “Ziverdo kit”, is written: “While the world is on a vaccine frenzy, the Indian government is distributing a home Covid Kit with Zinc, Doxycycline, and Ivermectin. The cost: $2.65 per person.”

Is the Indian government distributing pill packs including the controversial antiparasitic ivermectin to treat Covid-19? And is this kit responsible for declining death rates in the country? We checked. 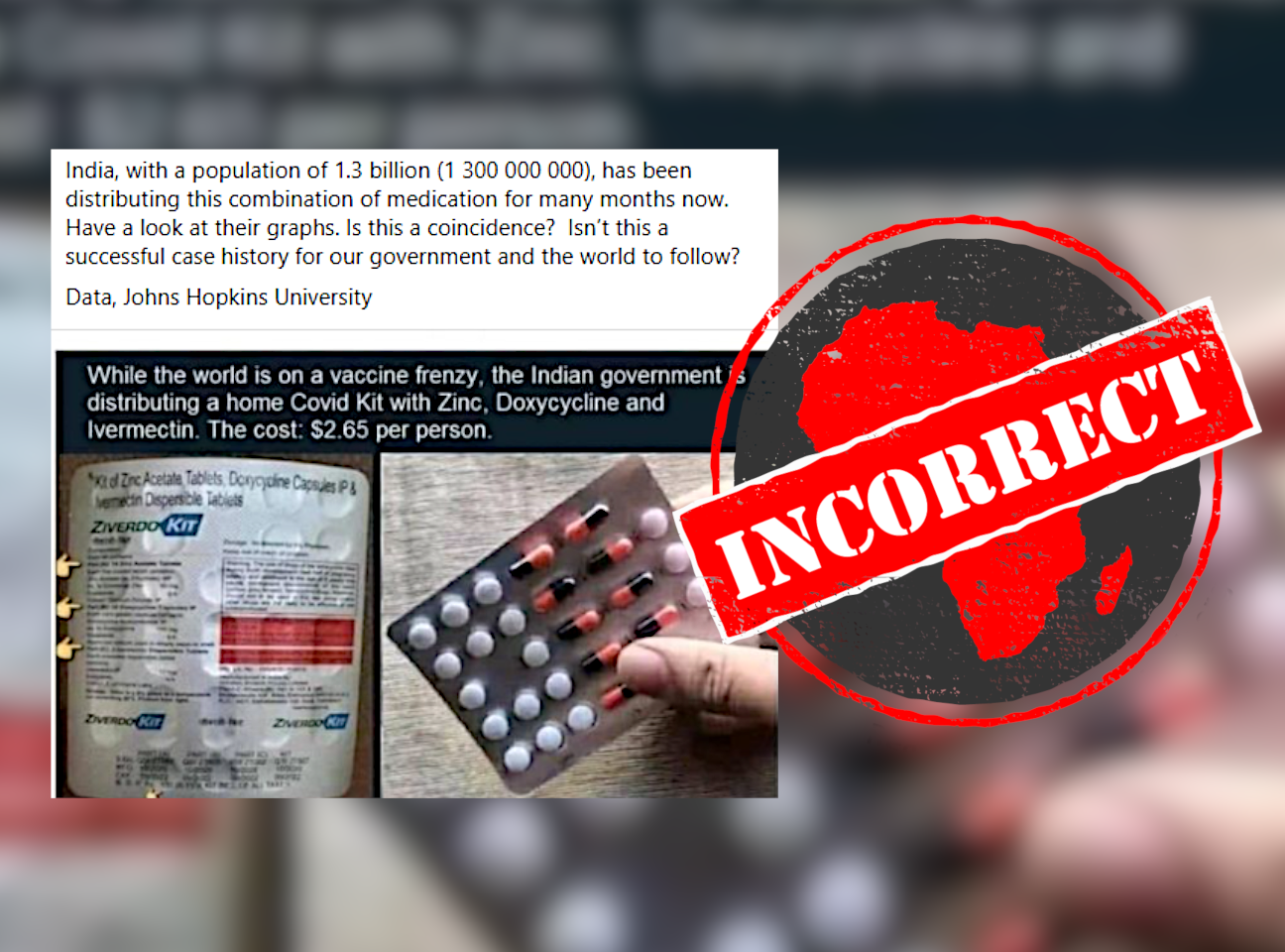 On 9 October 2020, the government of the small state of Goa, on the southwestern coast of India, announced it was launching home isolation monitoring kits for Covid-19 patients.

A press release from the state government said the kits would include a digital thermometer, pulse oximeter, N-95 masks, alcohol-based sanitiser and gloves, as well as medication such as paracetamol, multivitamins, zinc, doxycycline and ivermectin.

The kits were valued at 2,000 Indian rupees, just over US$27 – 10 times the cost quoted in the graphic – but would be made available for free to Covid-19-positive residents of Goa.

Kits only distributed in one state

According to the Johns Hopkins Coronavirus Resource Center, daily new cases in India peaked at over 97,000 in September 2020 and have since sharply declined to just under 14,000 in January 2021.

But this data is for the entire country. Goa is just one of India’s 28 states and eight union territories. Goa also has a relatively small population of just under 1.5 million people, compared to all of India’s 1.3 billion.

We could find no evidence that this Covid kit was being distributed by the central Indian government or by any other state’s government.

In late October 2020 one of the drugs in the kit, ivermectin, was not included in the Indian health ministry's clinical management protocol for Covid-19. The reason given for this was a lack of sufficient evidence on its efficacy, based on randomised clinical trials.

The South African Health Products Regulatory Authority, or Sahpra, has also said more research was needed before it could approve ivermectin for use in humans.

“There is no confirmatory data on ivermectin available as yet for its use in the management of Covid-19 infections,” Sahpra said in a 6 January 2021 statement. “In terms of safety and efficacy there is no evidence to support the use of ivermectin and we do not have any clinical trial evidence to justify its use.” (Note: See update below.)

It is misleading to attribute the decline of Covid-19 cases and deaths in India to a kit only distributed in one state. And there is not sufficient evidence that this combination of medicine is beneficial in the treatment of the disease.

Updates: India’s state of Uttar Pradesh has also reportedly used ivermectin off-label to treat patients. Uttar Pradesh is the most populous state in the country, with a population of 237.8 million people.

But Uttar Pradesh has attributed its control of Covid-19 to several factors, including surveillance and contact tracing, and targeted testing of specific groups. It would therefore be misleading to attribute the decline in Covid-19 cases both in Uttar Pradesh and nationwide to the use of ivermectin without suitable research confirming a causal relationship.

The US National Institutes of Health (NIH) said on 14 January 2021 that there was “insufficient data to recommend either for or against the use of ivermectin for the treatment of Covid-19”.

The NIH Covid-19 treatment guidelines panel’s recommendation was: “Results from adequately powered, well-designed, and well-conducted clinical trials are needed to provide more specific, evidence-based guidance on the role of ivermectin for the treatment of Covid-19.”

The US Food and Drug Administration has also not approved ivermectin for the treatment of the virus, and recommends additional testing of the drug.

On 28 January Sahpra announced that no new “robust scientific information” had become available since earlier in the month and there was still “insufficient evidence for or against the use of ivermectin in the prevention or treatment of Covid-19”.

But the regulatory authority said they would implement a “compassionate use access programme” for the use of the drug in humans ‒ ivermectin was previously not legally available for human use in South Africa. This was widely reported by local media.

The World Health Organization does not mention ivermectin in its discussion of treatments for Covid-19, and says it “does not recommend self-medication with any medicines, including antibiotics, as a prevention or cure for Covid-19”.