“Doktor spreek in ope brief kommer uit oor enstowwe,” reads the headline of a clipping from Rapport, a South African Afrikaans newspaper, posted on Facebook. It translates as: “Doctor expresses concerns about vaccines in open letter.”

The article appeared in Rapport’s 22 August 2021 edition. It discusses an open letter neurosurgeon Dr Herman Edeling wrote – in English – to president Cyril Ramaphosa, in which he opposes Covid-19 vaccines approved in South Africa.

Translation: “Edeling puts the word vaccines in quotation marks. He told Rapport that these are not (traditional) vaccines, because they are not made, like traditional vaccines, from weakened or dead virus cells.”

In his open letter, Edeling says something similar: “The experimental coronavirus mRNA ‘vaccines’ are different to traditional vaccines (weakened or killed bacteria or virus) that the world has grown to know and trust.”

He adds: “Logically therefore, by naming them ‘vaccines’, instead of experimental genetic interventions, people instinctively associate their safety and efficacy with the traditional vaccines they have grown to know and trust.”

Rapport quotes Edeling’s claims without any comment on their accuracy. 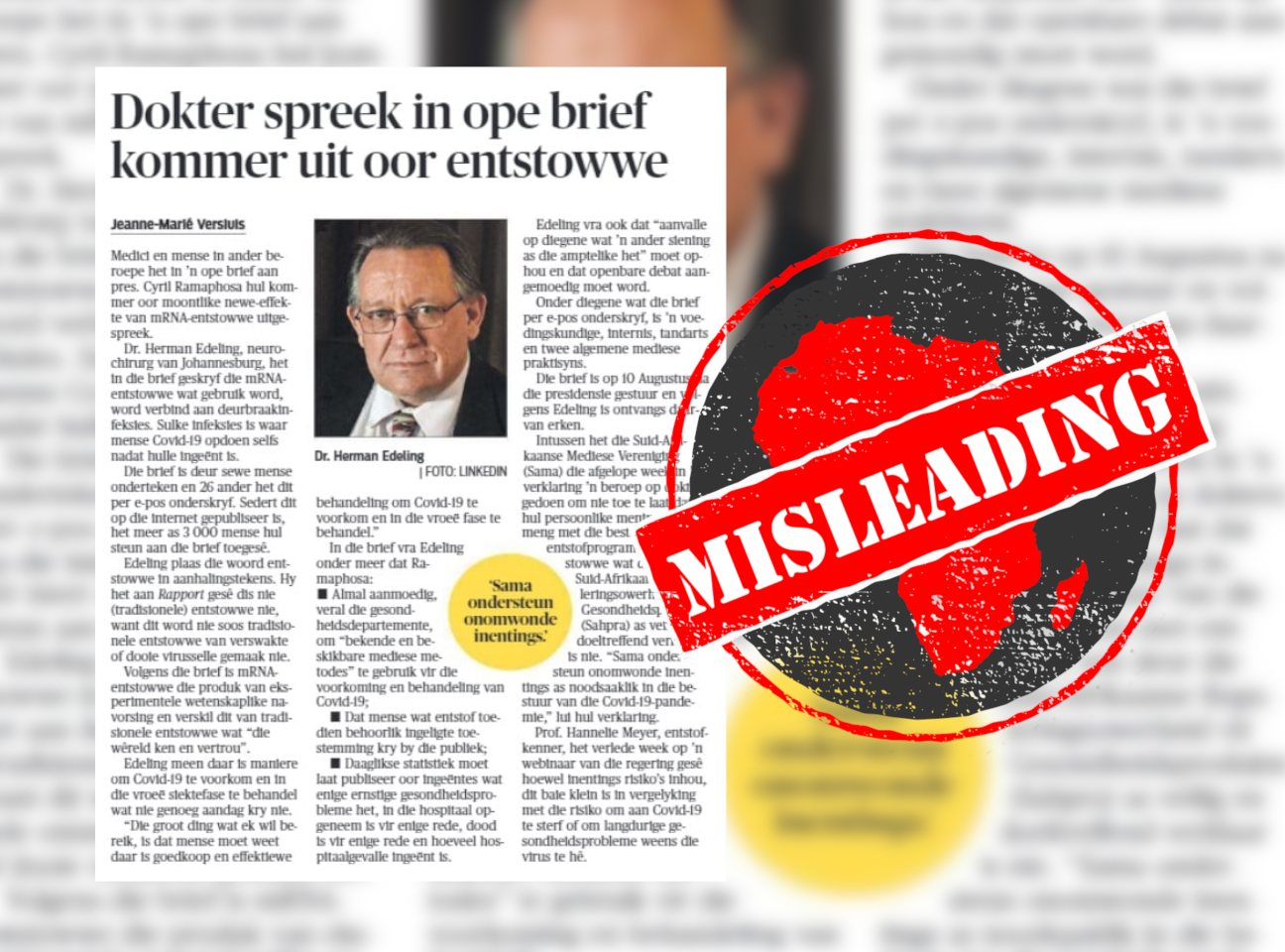 History of vaccines would include mRNA vaccines

We first need to understand what vaccines are.

Vaccines have a long history, going back more than 1,000 years. Essentially, a vaccine is a substance that stimulates the body’s immune system to fight a disease.

Early vaccines reportedly included drinking snake venom to give immunity to snake bite. There are also reports of a Chinese emperor, in the late 1600s, inoculating his children against smallpox by grinding up smallpox scars and blowing the powder into the kids’ nostrils. In the late 1700s, infecting people with cowpox – a cattle disease – was found to give immunity to smallpox, a human disease.

Today, we have vaccines against cholera, diphtheria, measles, meningitis, mumps, polio, rabies and many more diseases. These use a weakened form of the disease-causing viruses or bacteria to alert the immune system to the disease, and teach it how to fight it.

Messenger RNA vaccines are no different. They just use a new technology to stimulate the immune system.

“mRNA vaccines teach our cells how to make a protein – or even just a piece of a protein – that triggers an immune response inside our bodies,” the US Centers for Disease Control (CDC) says.

“The benefit of mRNA vaccines, like all vaccines, is those vaccinated gain protection without ever having to risk the serious consequences of getting sick with Covid-19.”

In his open letter, Edeling claims that “the definition of the word ‘vaccine’, as it has always been known, has recently been changed in order to accommodate the experimental coronavirus mRNA injections (refer Merriam-Webster)”. This is misleading.

The Merriam-Webster definition of vaccine has been updated since January 2021 to explicitly mention mRNA vaccines. This is not part of any conspiracy theory. It is language keeping up with science.

Definitions that would include mRNA vaccines have been in use for many years.

The CDC has since as early as March 2014 – seven years ago – defined a vaccine as a “product that stimulates a person’s immune system to produce immunity to a specific disease”.

Edeling’s letter mirrors more extreme claims that mRNA vaccines are not vaccines and are intended to alter human genes or have some other sinister effect. These claims have been repeatedly debunked by Africa Check as well as other fact-checking and public health organisations.

All vaccines against Covid-19, including mRNA vaccines, have gone through strict processes for them to be approved for public use. (See Africa Check’s factsheets on how drugs and vaccines are approved for use in South Africa, Nigeria, and Kenya.)

The processes include large-scale clinical trials to determine safety and effectiveness. They are followed by continued monitoring after the product has been approved for public use.

Rapport then quotes a statement by the South African Medical Association, expressing support for Covid vaccines. But it leaves out a key part of Sama’s statement: that the association will not support members who spread vaccine disinformation.

“The South African South Medical Association (Sama) unequivocally supports vaccination as essential in the public health response to the Covid-19 pandemic and endorses the importance of scientific integrity, transparency, and public confidence in Covid-19 vaccines,” the statement reads.

“Sama reiterates that Covid-19 poses a significant medical and public health risk, and notes with grave concern the spread of false information about Covid-19 vaccines by individuals within the medical fraternity. Medical professionals who propagate Covid-19 vaccination misinformation may discourage people from becoming vaccinated, which could lead to the preventable loss of life.”

It adds: “Sama will not support any of its members who spread misinformation about Covid-19 vaccines.”

Rapport does not include any comment from medical experts or health authorities who could have easily confirmed that vaccines against Covid-19 are indeed vaccines – no quotation marks needed. These experts would also have confirmed that Covid vaccines have undergone clinical trials and been found to be safe and effective.

This reporting gives unnecessary weight to Edeling’s claims, and presents them as more reliable than they are.