Cross on Ukrainian president Zelenskyy’s shirt a symbol of the Ukraine defence ministry, not the Nazi Iron Cross

Has Volodymyr Zelenskyy been snapped wearing a Nazi symbol? Photos of the Ukrainian president are circulating on Facebook with the claim that the small cross motif that sometimes appears on his trademark green T-shirt is in fact the Nazi Iron Cross.

The Iron Cross is a military medal first used in Prussia in 1813. It was revived by Nazi leader Adolf Hitler in 1939, at the start of the second world war. It is used by modern neo-Nazis as a symbol of hate.

Two graphics make the claim. The first shows a screenshot of a Wikipedia entry on the Iron Cross below a photo of Zelenskyy. The medal looks similar to the cross on the president’s shirt.

It was posted on 17 March 2022 with the comment: “Hitler’s midget out there with the Iron Cross decorating his chest.”

The second graphic has an old black and white photo of high-ranking Nazi military officer Josef Dietrich wearing an Iron Cross next to a photo Zelenskyy in the green shirt with a cross.

“Zelensky...he's proud to wear the iron cross emblem in other photos and videos too. #Zelensky #UkrainianNazi,” one user commented.

The Nazi party was Germany’s ruling party from 1933 to 1945. It was responsible for the targeted violence and state-sanctioned mass killings of Jewish people, Roma and Sinti ethnic minorities, homosexuals, disabled people and communists. Its attempts to expand its control to neighbouring countries sparked the second world war.

Russia has claimed that one reason for its invasion of Ukraine is to “denazify” the country.

Zelenskyy is a former comedian who was elected president in 2019. He is also Jewish.

Is the cross that sometimes appears on his T-shirts the Nazi Iron Cross? We checked. 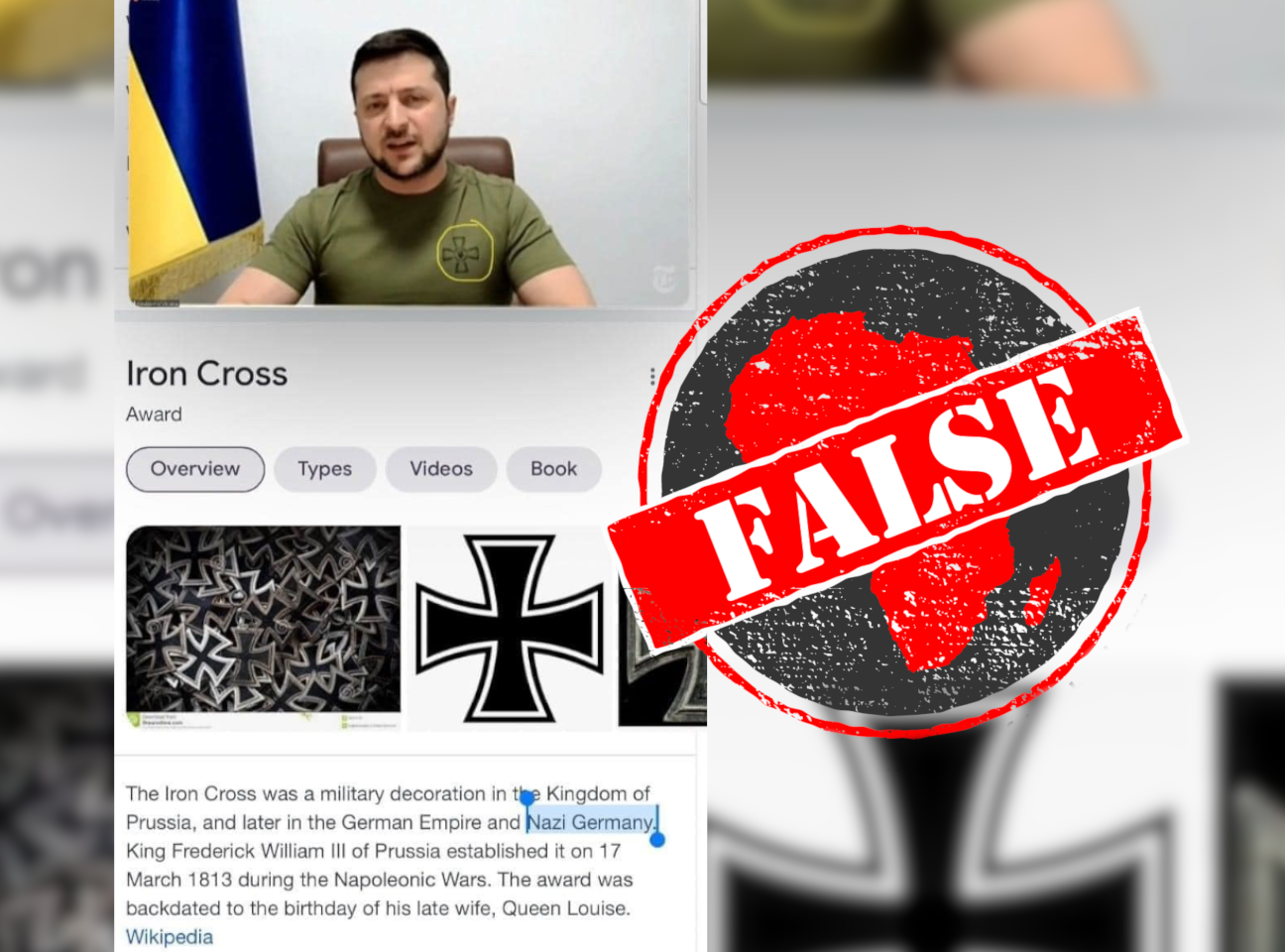 The photos of Zelenskyy are authentic and were taken during a video conference with the US Congress on 17 March. During the conference Zelenskyy pleaded with US lawmakers to send more military aid to Ukraine and to impose harsher economic sanctions on Russia.

But the cross on his T-shirt is not the Iron Cross. It is the symbol of the Ministry of Defence of Ukraine and appears on the ministry’s website.

The Anti-Defamation League, or ADL, is a nonprofit organisation founded in response to increasing antisemitism, and continues to fight against all forms of hate. Antisemitism is hatred of and hostility towards Jewish people.

According to the ADL’s website, the Iron Cross was transformed into a Nazi symbol after the Nazi party added a swastika to the existing medal. This version of the Iron Cross has since been used as a symbol of hate.

But the site adds that the iron cross symbol is also commonly used in nonracist contexts.

“An Iron Cross in isolation (i.e., without a superimposed swastika or without other accompanying hate symbols) cannot be determined to be a hate symbol,” the website says.

“Care must therefore be used to correctly interpret this symbol in whatever context in which it may be found.”

The cross symbol on Zelenskyy’s shirt does not include a swastika, which would have made it a Nazi symbol. Instead it includes a trident, which is the Ukraine coat of arms.

Historians also confirmed that the cross was not the Nazi symbol to media outlet Associated Press.

Yale University professor and European history scholar Timothy Snyder reportedly said it is “not an Iron Cross of any kind”. He added: “The use of a cross as part of a military insignium is not at all unusual.”

Zelenskyy does sometimes wear a T-shirt with a cross on it. But the symbol is not the Nazi Iron Cross, which includes a swastika. It is the symbol of the Ukraine’s Ministry of Defence of Ukraine and contains the country’s coat of arms.