“DA, encouraging their supporters to protest against Palestine in favor of Israel,” reads text on two photos going viral on Facebook and WhatsApp in South Africa in October 2021. “How can any Muslim sound of mind, still vote for this Apartheid Party called DA???”

The photos appear to show the same scene: people walking down a street carrying placards that read “ISRAEL: WE STAND WITH YOU.” Many of them are wearing T-shirts with “ISRAEL” on the front, above that country’s flag.

The DA is the Democratic Alliance, a political party and the main opposition to South Africa’s ruling African National Congress.

The conflict between Israelis and Palestinians has deep roots, and polarises opinion. Do the photos really show DA supporters protesting against Palestine, in favour of Israel? 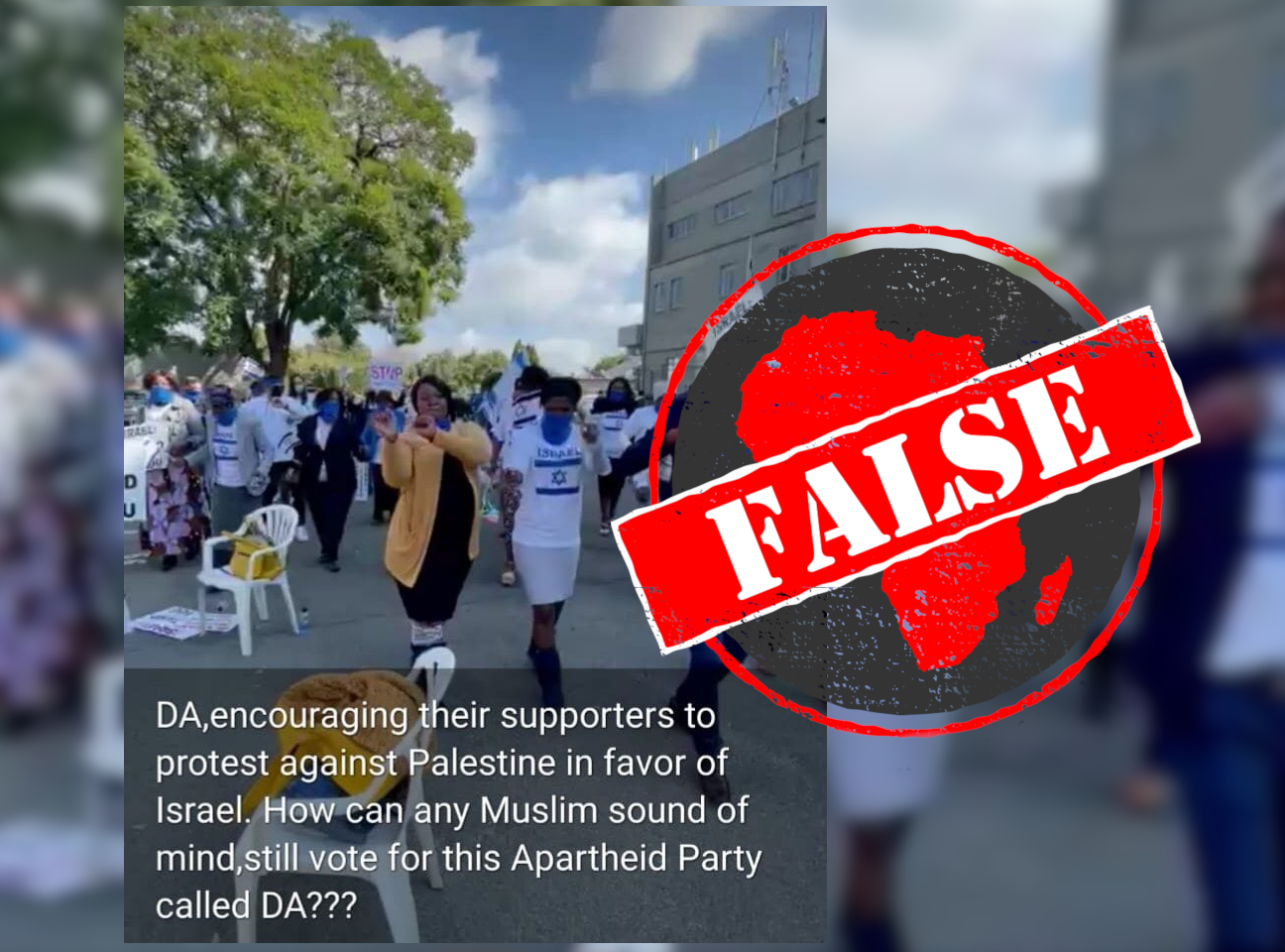 We ran the photos through a reverse image search on Berify, which is able to pick up videos from image frames extracted from them.

This led us to a video on the Facebook page “Israel TB”, which describes itself as a “Society & Culture Website”.

In the video, people in the same T-shirts carrying the same placards can be seen dancing to Jerusalema, a song by South African DJ Master KG. The same building can be seen in the background. The photos on Facebook are frames taken from roughly 14 seconds into the video.

Based on an old hymn, Jerusalema’s lyrics refer to the ancient city of Jerusalem, which is considered holy in Christianity, Islam and Judaism. Since 1967, Jerusalem has fallen within the borders of Israel.

Jerusalema became a global hit and dance craze in 2020, thanks in part to the #JerusalemaDanceChallenge on social media.

So the photo was taken from a video of people dancing to Jerusalema. But are they DA supporters protesting against Palestine?

A Facebook search for the first sentence on the photos led to a graphic that’s been online since at least May 2021.

The graphic shows one of the photos, plus its description, stamped “FAKE NEWS”. Text next to it reads: “THIS IS NOT THE DEMOCRATIC ALLIANCE (DA). This is an organisation called South African Friends of Israel.”

South African Friends of Israel (Safi) describes itself as a “flagship initiative” of the South African Zionist Federation and a “broad-based grass roots movement” begun by people “inspired by a common goal: to stand up for Israel in the face of rising anti-Semitic rhetoric – both in South African [sic] and around the world”.

A search through the videos on Safi’s Facebook page found a similar clip of people dancing to Jerusalema, wearing the same T-shirts and carrying the same placards. It’s dated 24 May 2021 and is captioned: “South Africans from all walks of life come together in Johannesburg to spread their love for Israel.”

A look through other photos and videos on Safi’s social media accounts reveals that similar T-shirts and placards can be seen at many of the organisation’s events.

The South African government’s position on “the situation between Palestine and Israel” – as seen, for example, in a 2020 statement by its permanent mission to the United Nations – is clear.

The statement was delivered to the UN Security Council’s open debate on the situation in the Middle East, including the Palestinian question in April that year.

It reads: “We will continue to support all efforts aimed at the establishment of a viable, contiguous Palestinian State, existing side-by-side in peace with Israel, within internationally recognised borders, based on those of 4 June 1967, with East Jerusalem as its capital, in line with all relevant UN resolutions, international law and internationally agreed parameters.”

If the DA had openly contradicted this position by holding a “protest against Palestine in favour of Israel”, it would have made national news. It hasn’t.

The photos on Facebook are frames from a video of an event organised by the South African Friends of Israel, not the Democratic Alliance.