Danger! This smoothie won’t cure diabetes – and could make it worse

“Cure for diabetes and helps you lose 11 kilos in 25 days,” reads text on a video showing a smoothie recipe, posted on Facebook.

The smoothie is made by blending two bananas, five kiwis, two apples with their skin, one “coat” of cabbage and half a litre of water together.

The video advises that the smoothie can be taken at any time, but recommends drinking it in the morning on an empty stomach, immediately after preparation. Viewers are also told to  “maintain a healthy diet, with vitamins, antioxidants, minerals things that fill your body energy”.

“Over the 6 months there will be gone or you're cured of diabetes,” text on the video reads. It adds that “the batter works perfectly”.

Diabetes is a chronic condition that causes high blood sugar levels because of the way the body responds to insulin, a hormone that controls blood sugar levels. Uncontrolled diabetes can lead to serious health problems.

But will this smoothie really cure diabetes? 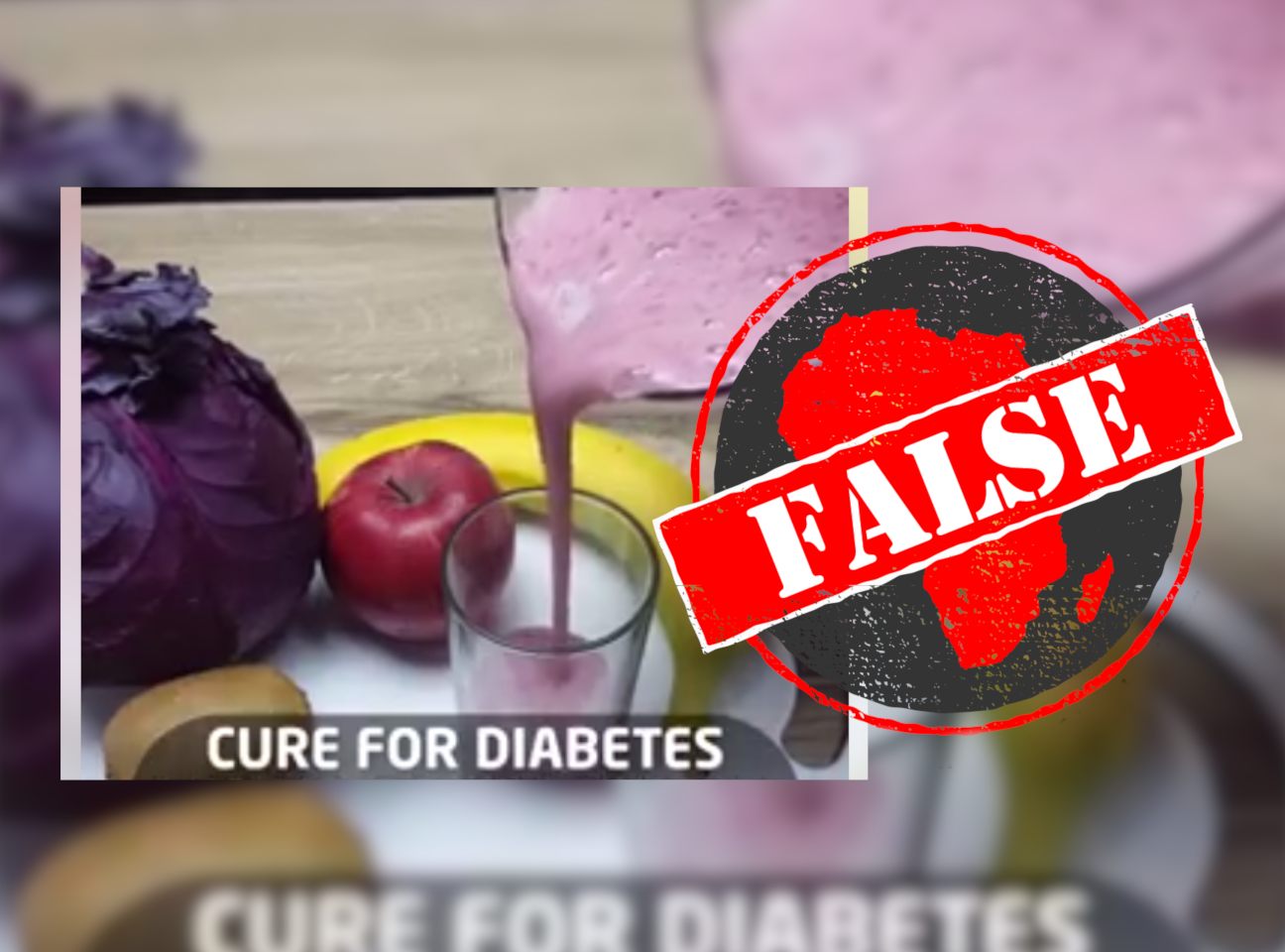 No cure for diabetes

“There isn’t a cure yet for diabetes,” the US Centers for Disease Control says. Instead, the condition is treated with insulin. Exercise, weight control and healthy eating also help.

Dr Jay Narainsamy, an endocrinologist at South Africa’s Centre for Diabetes and Endocrinology told Africa Check that the smoothie would not cure diabetes. She referred us to Michelle Daniels, a diabetes dietician at the centre.

“I have no idea how anybody comes up with a claim that that’s a cure, especially because there’s no cure for diabetes,” Daniels said.

“Type two can be put into remission with a specific diet, but that’s remission, not cured. We can’t make a claim that a food can contribute to a cure for diabetes at all.”

Remission is when a person with type two diabetes has normal blood sugar levels without taking medicine.

Type one diabetes is when the body’s immune system destroys the cells that make insulin. Type two diabetes is when not enough insulin is produced by the body, or its cells do not respond to it.

Daniels told us that if a diabetic had this smoothie once, their sugar levels would increase but then come back down again. “But if somebody thought that was healthy and they kept drinking that, they would have high sugars.”

This is because the fruit in the smoothie has a lot of carbohydrates. “Carbohydrates are converted to glucose in everybody, but in people with diabetes it’s a much more marked effect.” Glucose is a type of sugar.

But this depends on the person, their blood sugar levels, and the medicine they are on because “everyone with diabetes is so different”, she added.

The UK’s National Health Service has this warning about high blood sugar: “Regularly having high blood sugar levels for long periods of time (over months or years) can result in permanent damage to parts of the body such as the eyes, nerves, kidneys and blood vessels.”