It says, among other things, that “in South Africa a child gets stolen every 30 seconds to be kidnapped for the sex industry”, that “the popular ages are between 4 and 12 years and then between 16 and 22 years”, and that containers of around 140 children are “shipped”, typically over 21 days, to “Thailand, China or Japan”.

Except the message is totally unsubstantiated and contradicts what is known about trends in child trafficking. Let’s explain. 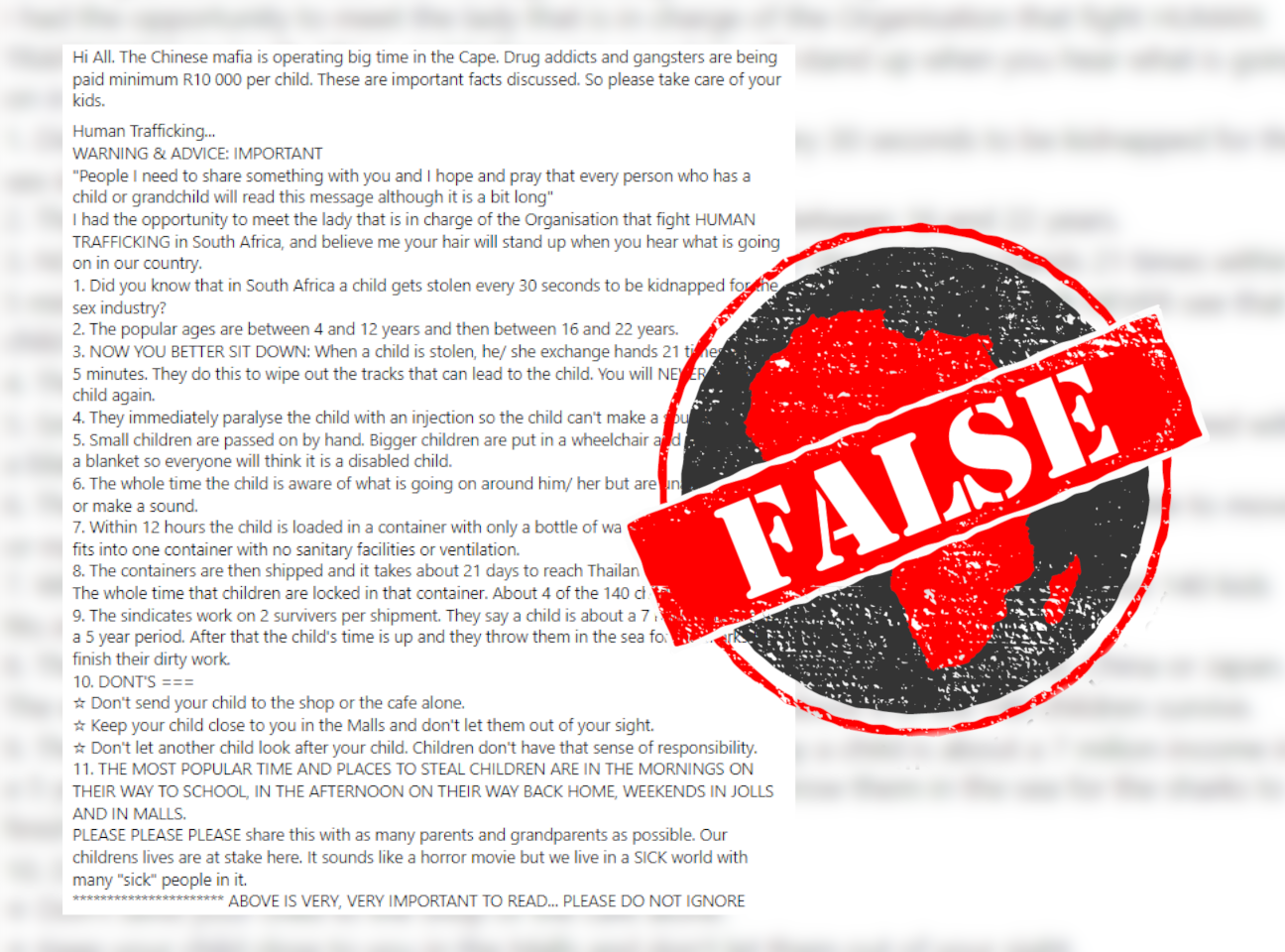 One of the first claims in the post is that “in South Africa a child gets stolen every 30 seconds to be kidnapped for the sex industry”. This adds up to over 1 million children a year. But there is no data to support this figure.

Africa Check fact-checked the claim in 2018. At the time, the South African Police Service told us that 996 children had been reported missing in 2016 – far fewer than a million.

The ILO acknowledged that its report contained “minimum estimates, based on conservative calculations”. It added that the difficulty of collecting data on trafficking, which is by nature difficult to study, meant the figure was likely inaccurate even when it was first calculated.

But with few other estimates of human trafficking, this estimate is regularly quoted, appearing for example in a 2007 Unesco report on human trafficking in South Africa, and in several ILO materials such as this 2010 brochure on child trafficking.

While the estimate is two decades old, it contradicts the claim that just over a million children are kidnapped each year in South Africa alone, to be forced into the sex trade.

Data on child trafficking sparse, but none supports the claims

Africa Check has debunked several claims about human trafficking. A recurring issue is that there’s little information on the subject. But what does exist contradicts the claims in the Facebook message.

For example, while the message claims that opportunistic kidnappings are extremely common, an ILO training manual for fighting human trafficking says this is not the case. The organisation writes that “instances of people being kidnapped or abducted into trafficking” are “much rarer than people commonly think”.

The ILO writes that trafficking typically begins when a child is recruited by someone with whom they have a “relationship of trust”. In the case of children this may be “someone from their own community, or the same ethnic group, who offers an introduction into a similar ethnic grouping in another place or country”.

The Counter Trafficking Data Collaborative (CTDC), which collects data from several international organisations, has recorded only 141 South African victims of human trafficking since 2005. This includes both adults and children, but only 1% of victims were aged zero to eight years, and only 5% were aged nine to 17.

The CTDC is not a comprehensive record of all human trafficking victims, but the limited information it offers contradicts the claims in the message.

According to the CTDC, South African citizens who were trafficked internationally were taken to 11 other countries, but 55% were exploited within South Africa. The most common country of exploitation was the United States of America. None of the recorded victims went to Thailand, China or Japan.

The CTDC also records that 0% of victims left South Africa by boat, with the most common forms of transport being car, air and bus. Only two-thirds travelled with another victim.

This suggests that if trafficking victims are “shipped” to China or Japan, this is not a common practice, as the message implies. “Generally internal trafficking will be done using various land forms of transport,” the ILO writes.

The trends the message describes are inaccurate. They do not reflect what is known about child trafficking.