Dubai publicly executes man 15 minutes after rape of child? No, photo and video from Yemen, execution two years after crime

Just 15 minutes after a five-year-old child was raped in Dubai, the judiciary “ordered the police to shoot the rapist in public”.

That’s the claim in a graphic posted on Facebook in South Africa on 14 August 2022. It appears to have also been doing the rounds on WhatsApp.

The graphic includes a blurry photo of a uniformed man pointing a rifle down at another man dressed all in blue and lying on a chequered red and white blanket in a public square. A large crowd of people look on.

A search of Facebook led us to several other instances of the claim, some dating back to 2018. They include a video clip from which the photo was taken. It shows the same man in blue on a chequered blanket. The same soldier shoots him five times with an AK-47 rifle. The man’s body is then strung up on a crane.

A typical caption to the video reads: “5 year old was raped in Dubai...Within 15 minutes of this rape incident, the judiciary ordered the police to shoot the rapist in public view.” It adds: “This is what South Africa should do with the criminals of this country.”

Dubai is a city and emirate in the United Arab Emirates (UAE), a country in the east of the Arabian peninsula in the Middle East.

The penalty for rape in the UAE is life imprisonment, according to a new law that came into effect in January 2022. If the victim is a minor or disabled, the rapist can be sentenced to death.

But was a man publicly executed in Dubai within 15 minutes of raping a five-year-old child? And do the photo and video show the execution? 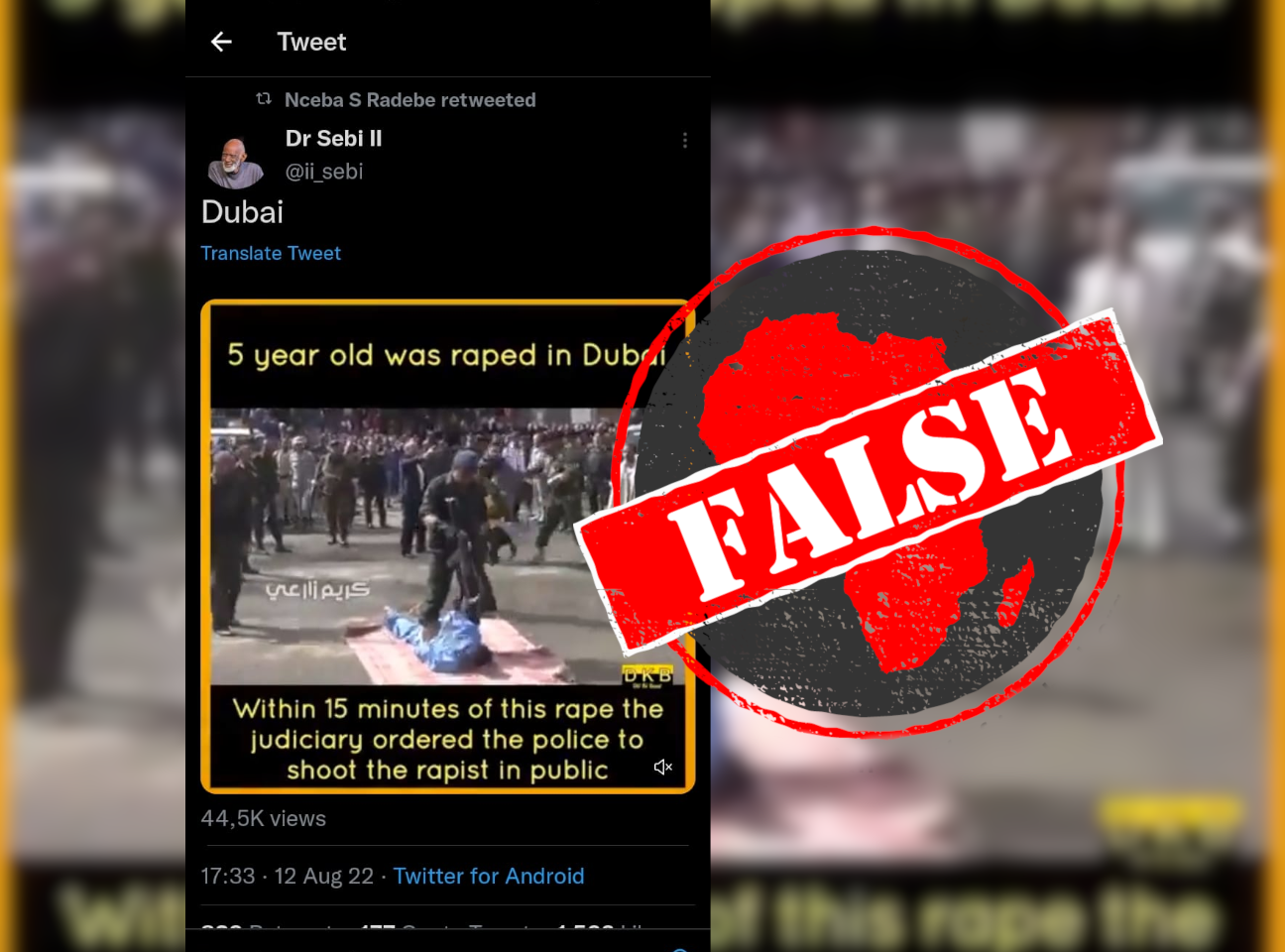 A TinEye reverse image search led us to an article on the Chinese-language website SETN, dated 1 May 2018, in which the photo appears.

A machine translation of its opening paragraph reads: “A 22-year-old man in Yemen was publicly executed by the government for sexual assault a few days ago. After shooting him five times in the head, he was hanged by a crane to show the public, while the crowd cheered.”

Yemen is a country in the south of the Arabian peninsula, about 1,300 kilometres from Dubai.

The article identifies the executed man as Hussein al-Saket, who “sexually assaulted and killed a five-year-old girl in November 2015”. He was “scheduled for a public execution in August 2017”.

A Google search for “Hussein al-Saket Yemen execution” returned several news reports from August 2017 that largely confirm SETN’s account. Some of the articles include AFP photos that show Saket, in blue, lying on the chequered blanket as the soldier points the AK-47 rifle at him.

Saket was reportedly executed in Sanaa, the capital of Yemen, which has been held by Houthi rebels since 2014. He had been found guilty of the abduction, rape and murder of a young girl in 2015. She was four years old, not five.

Africa Check could not find any credible news reports of a public execution in Dubai 15 minutes after a man raped a child. And the photo and video show the execution of a man found guilty of raping and murdering a child in Yemen almost two years after the crime.