Free money? As we’ve said before, if it sounds too good to be true, it often is.

This is the case with another online scam that tells Facebook users that “Go2Bank is giving $1000 automatically deposited for new accounts”.

Go2Bank is a real mobile banking service that has been featured in Forbes. But it is not associated with Facebook posts supposedly giving away thousands of dollars.

Let’s explain this scam, and why we found it so interesting. 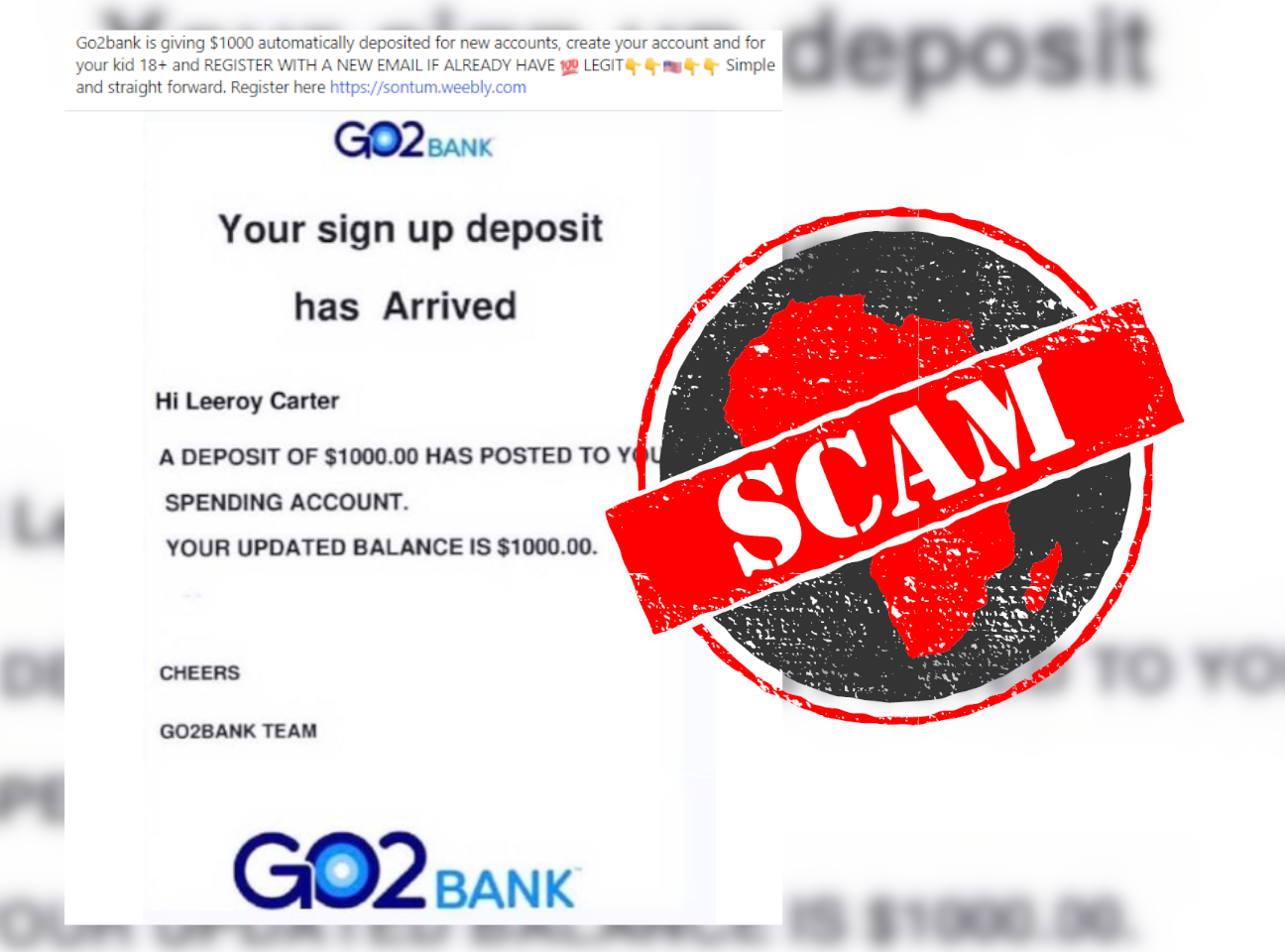 The suspicious Facebook posts typically include text similar or identical to: “Go2bank is giving  $1000 automatically deposited for new accounts ,create your account and for your kid 18+ and REGISTER WITH A NEW EMAIL IF ALREADY HAVE 💯 LEGIT 👆❤️👆☝️”

This is followed by a link, or instructions shared in the comments of the post. Except, none of the posts linked to go2bank.com, the company’s official website. And none of them appear on its official Facebook page, which is verified.

And, while Go2Bank does run promotions like this one in which it pays users who refer friends to the service, it does not automatically deposit US$1,000 into new accounts.

The Facebook posts are scams, likely designed to trick victims into giving the scammers their banking or other valuable personal information. For advice on how to identify and avoid scams like these, read our guide.

But this particular scam stood out to us, because it is spread on Facebook in an unusual way.

A most peculiar scam

Africa Check came across the Go2Bank scam in a roundabout manner. We were led to it after we started investigating a seemingly unrelated series of claims about a nonexistent serial killer.

As we wrote in the fact-check, the claims stood out because they were being posted on the local Facebook groups of cities in the United States by users in South Africa and Zimbabwe. They had nearly identical wording, changed slightly to use the name of the particular city. It was clear that these serial killer claims were a hoax, but the motive for the hoax was unclear. Until we discovered the link to the Go2Bank scam.

The Go2Bank scam originally appears in Facebook groups as ordinary-looking posts. They often encourage people to interact with or share them. Shortly afterwards, the posts are edited to replace their content with the Go2Bank message.

For example, this post, which had originally contained the serial killer claim, was later changed to the Go2Bank scam.

Editing a post after sharing it in this way seems to be a new technique for spreading a Facebook scam as far as possible. And it has obvious benefits for the scammer. Many Facebook users avoid sharing something that looks suspicious, but they are more likely to share a seemingly innocent warning about, for instance, a serial killer at large.

Users who see a post after it has been shared may be more easily tricked by the scam if the person sharing it is someone they trust. These deceptive posts might also help the scammers subvert the rules about what can be posted on a group.

Obviously, all of this makes it difficult to spot a scam. As long as a post isn’t false (like the serial killer posts were), it may be hard to tell that it’s part of a scam. And of course, an individual Facebook user wouldn’t know that dozens of accounts were sharing nearly identical posts, which could be the only giveaway.

The only way to avoid sharing this kind of scam is to be careful about the posts you share. Avoid sharing posts from people you don’t know, or posts that seem to be trying a little too hard to get you to share them.