“My friends don't avert your eyes. Like so many thousands before her – this little girl required surgery after she was #RAPED!” reads a Facebook post published in South Africa on 23 September 2020.

The post includes two graphic photos of a young girl in a blood-stained dress. (Warning: Viewer discretion is advised.)

At the time of publishing, the post had been viewed more than 800,000 times.

The post goes on to share various figures about rape in South Africa, crediting Africa Check as the source.

There is no denying that the country has a serious sexual violence problem. But the claims in the Facebook post are incorrect and are not drawn from Africa Check reports. And we could not prove the origin of the photos of the girl.

We took a closer look. 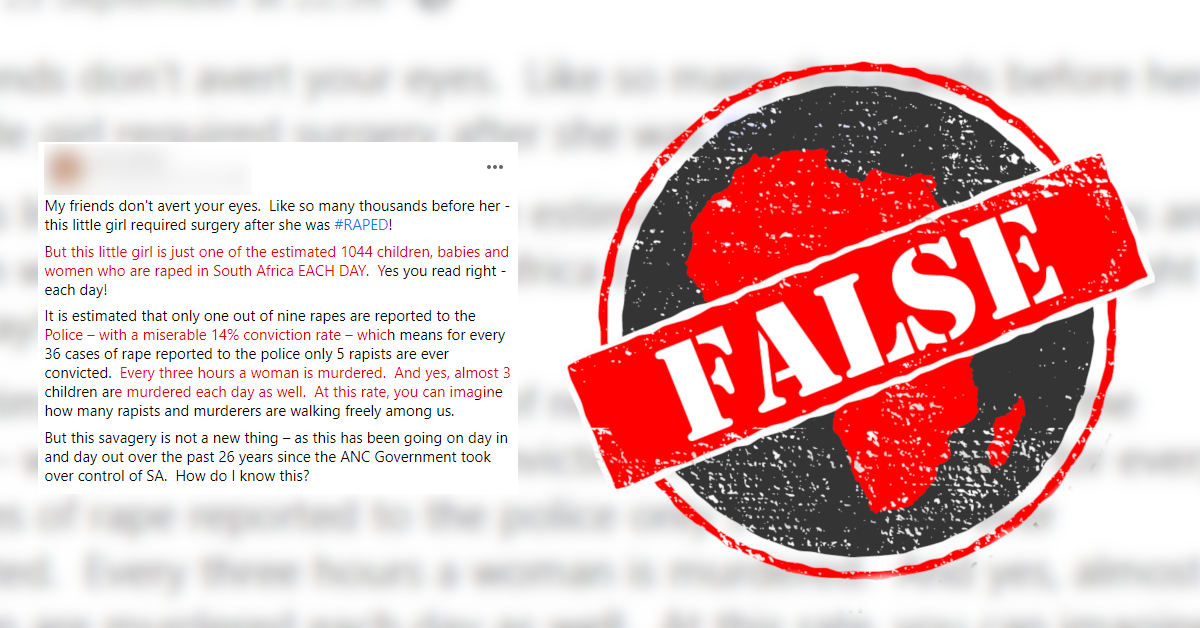 The Facebook post claims that the girl is one of an estimated 1,044 women, children and babies raped every day in South Africa. “Yes you read right – each day!” it says.

According to the South African Police Service, 25,801 women were raped from April 2019 to March 2020. The figure was 17,118 for children. This means an average of 118 women and children were raped each day that year.

Experts have previously warned that the police’s rape statistics should not been viewed as an “accurate measure of either the extent or trend of this crime”. But there is no evidence to suggest that as many as 1,044 women, children and babies are raped every day.

Very few studies have been conducted on the true extent of rape in South Africa. Without recent, nationally representative data, it is impossible to estimate how many people are raped each year.

But there are two studies that provide limited insight into how many women report rapes to the police.

The 2010 Gauteng Gender Based Violence Indicators Project found that 3.9% of women who had been raped had reported it to the police. But the study is not nationally representative, having been conducted in the Gauteng province alone.

South Africa’s 1998 Demographic and Health Survey found that 15.2% of women aged 15 to 49 who had been raped had “sought help from the police”. Although the study was nationally representative, only women aged 15 to 49 participated. And the data is over 20 years old, and therefore cannot be reflective of the current situation in South Africa.

The claim that only one out of every nine rapes is reported to the police is therefore unproven, as is the claim about a 14% conviction rate.

South Africa’s National Prosecuting Authority publishes conviction rates for the broad category of sexual offences but does not provide a separate conviction rate for rape. Without this data, it is impossible to say which percentage of rape cases end in a conviction each year.

It is also widely accepted that conviction rates are not a reliable measure of the success of the justice system.

Only 340 (8.6%) of the original cases ended with a guilty verdict. Experts told Africa Check they were not aware of any more recent studies.

The Facebook post includes two photos of a young girl in a blood-stained dress. It claims that the girl required surgery after she was raped in South Africa. But a TinEye reverse image search shows both images have been online since at least December 2019, when they were posted to a Nigerian online forum.

A Google reverse image search returned a link to the Twitter hashtag #justiceforoluwatosinabosede. According to tweets posted with the hashtag, the photo is of a young Nigerian girl who was raped in Ondo state in the west of the country.

But we could find no credible news reports to confirm this. We could not determine where the photos were taken, or what the context was.

Sexual violence and rape are serious concerns in South Africa. But attempts to draw attention to the problem and inform ways to tackle it must be evidence based. – Africa Check