Facebook users from Africa say Tennessee prisoner an active serial killer in US cities? No, weird warning a hoax

People in the small city of Port St Lucie in the US state of Florida may have seen Facebook posts warning of a “serial killer or abductor who is currently hunting” there. The posts show a photo of a man with a shaved head.

The warning message, circulating on Facebook in August 2022, claims that the man “drives a truck with led lights and hits Cars of women alone and once they pull over he takes them”.

One Facebook user who has posted the message on at least two Port St Lucie group pages appears – from their friend list and likes – to be from South Africa.

But how would a South African have the photo and knowledge of an unnamed serial killer stalking an obscure city in the United States?

They don’t. The claim is a hoax. 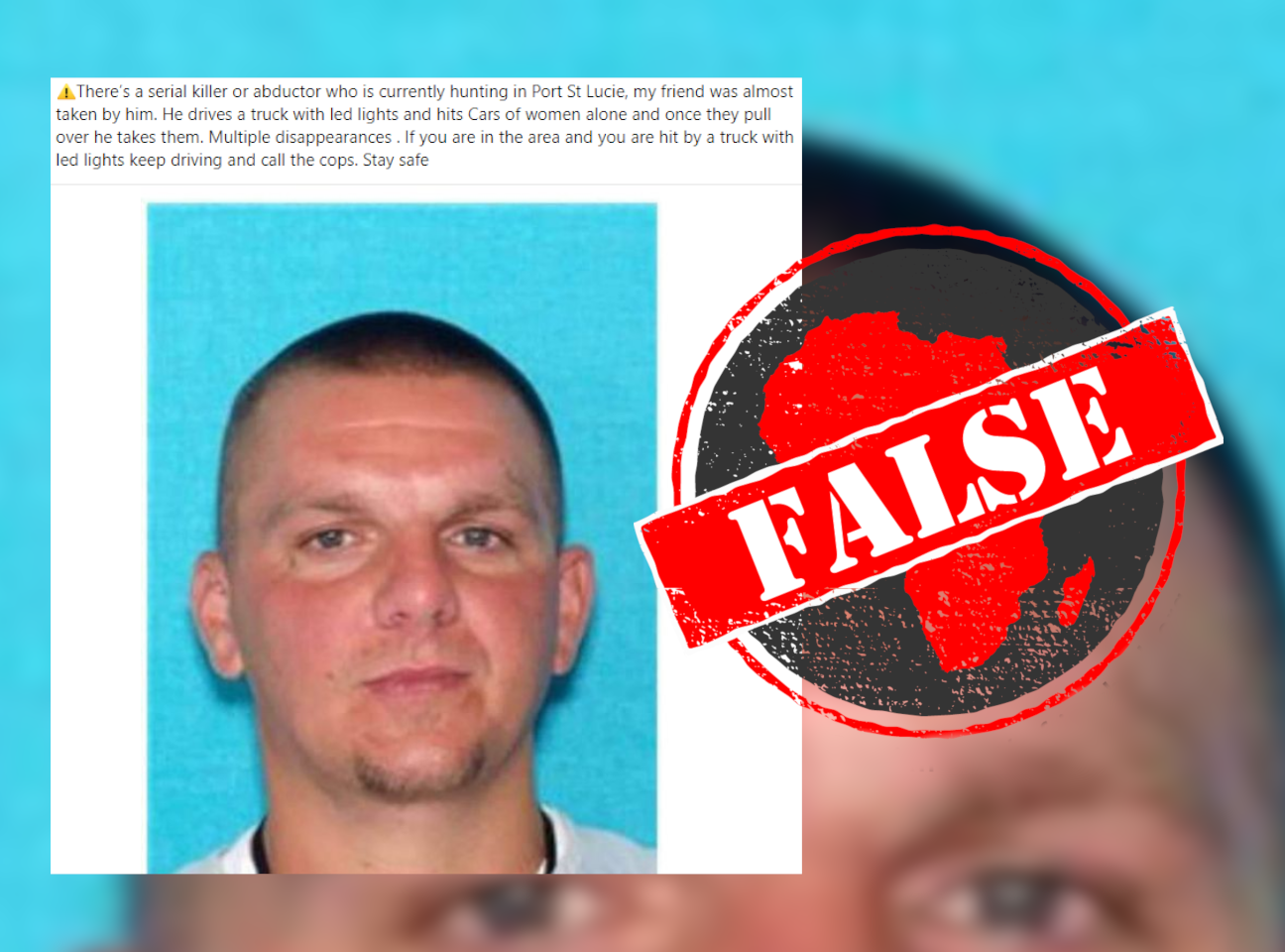 The photo is the mugshot – booking photo – of Brandon Odom, an inmate of Dickson County Jail in the US state of Tennessee. Odom was in the news in July after briefly escaping custody by walking away from a work crew. He is reportedly serving a four-year sentence for “reckless homicide”.

The Dickson County Sheriff’s office was one of several US police departments to debunk the claim that Odom’s mugshot showed the face of an active serial killer. It wrote on Facebook: “This is false! This is a real booking photo and this subject is in custody, but for unrelated charges.”

Port St Lucie police also took to Facebook to warn residents that the message was false. “This post is fake and not legitimate. Please do not share the fake post,” it said on 15 August.

Police in Fairfield in the state of California have also gone online to debunk the claim. So have police in Georgetown, Kentucky, Elk Grove, California, Portage, Indiana, and in many other US cities.

The plot thickens … in Zimbabwe?

Africa Check has found that many of the Facebook users posting the warning are from Zimbabwe, one of South Africa’s northern neighbours.

The users describe themselves as living in or coming from cities in Zimbabwe. But they’ve posted Odom’s photo with the serial killer warning on local Facebook groups in the US.

It’s not clear why Facebook users in southern Africa are using the mugshot of a prisoner in Tennessee to launch a wave of disinformation.

The Facebook users posting the hoax claim don't have the usual signs of fake accounts, such as being recently created, lacking personal information and having similar profiles.

Why is the warning spreading online? We have no idea. But we do know that Brandon Odom remains in prison and is not a serial killer “hunting” in US cities.

Update: Evidence of a scam

19 August 2022 – We were initially stumped by this hoax, but have now found that it’s part of a scam.

After this report was published, we noticed that one of the Facebook accounts that had posted the false serial killer claim had also promoted an obvious scam offering a bogus US$1,000 giveaway to people who opened a new Go2Bank account.

Go2Bank is a real service, but is not giving away free money. We have detailed the Go2Bank scam in a separate report, which you can read here.

How it works is that the scammer first posts a relatively innocuous message, such as the serial killer claim, on a public Facebook group page. This means the message is likely to be shared far more widely than an obvious scam would be.

Once the message has been approved by moderators and shared by members, it is edited to replace its content with the Go2Bank scam. These changes can be seen in the post’s edit history, which can be viewed by clicking the three dots at top right.

One post, in a Christian ministry group, initially asked people about their faith in God. Another post was first a quiz, posted on a John Wayne fan page. Both were later edited to show the Go2Bank scam instead.

We found the smoking gun that proves the hoax is a lead in to the scam in another Go2Bank post, which had originally appeared as the false serial killer claim.