A video of a German “attorney at law” delivering the opening statements of “a group of distinguished international attorneys and lawyers” in a “grand jury” case has been posted on Facebook in South Africa.

The claims in the video are mostly about a “group of super rich psychopathic and sociopathic people” who, the attorney alleges, “cooked up” the Covid-19 pandemic.

But the “grand jury” has no legal authority, and its main claims are unsubstantiated or outright falsehoods. 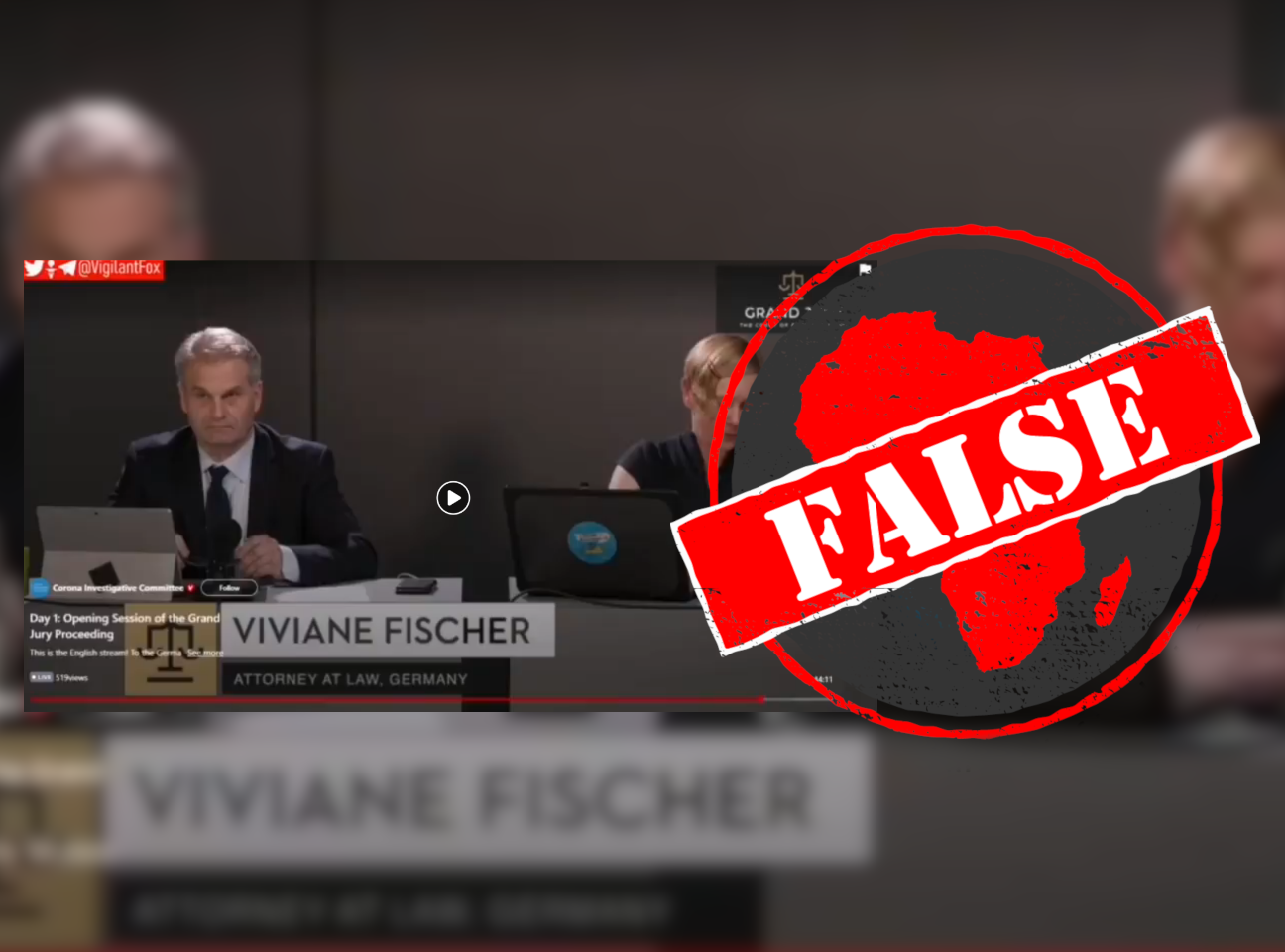 Just anyone can start a grand jury these days?

A grand jury is a group of ordinary people who determine whether a person should be brought to trial after being accused of a crime. Grand juries are now only held in the United States and in Liberia.

Not all legal systems use the jury system, and grand juries do not determine guilt or innocence, unlike the petit – trial – juries often shown in films and TV.

And this particular “grand jury” is not part of any legal system. It is a group named Grand Jury: The Court of Public Opinion, which is supposedly “modelled after the United States grand jury proceedings”.

The group is funded and run by the Berlin Corona Investigative Committee, a German organisation that denies the severity and impact of the Covid-19 pandemic. The committee also has no legal standing.

The Grand Jury aims to share evidence of what it calls “Covid-19 crimes against humanity”. It has no power to prosecute these imagined crimes, and has “been unable to find a court to hear the actual evidence”. So, like other self-appointed juries Africa Check has investigated, the decisions of the Grand Jury carry no legal weight.

The video on Facebook is taken from the Grand Jury’s much longer “opening statements” in which its members set out these aims and outline the “crimes against humanity” they plan to expose.

The man speaking in the video is Reiner Fuellmich, a German lawyer who has repeatedly made false claims about the Covid-19 pandemic.

Fuellmich has also helped file lawsuits opposing Covid prevention measures around the world. According to both a German lawyer quoted by US news outlet Vice and German fact-checking organisation Volksverpetzer, Fuellmich has raised at least €1.3 million from plaintiffs in these suits.

In the Grand Jury’s “opening statements”, Fuellmich claims that “the world’s governments”, under the influence of unnamed other figures, “colluded to stage a pandemic that they had been planning for years”. This pandemic was supposedly meant “to persuade the population to agree to the so-called vaccinations” which are “extremely dangerous, even lethal”.

Fuellmich makes many claims in the jury’s “opening statements”, without giving evidence to support them. Almost all of these claims have been repeatedly debunked in the past.

Here are some of the most common and noteworthy of the false claims Fuellmich references.

Others have claimed, as Fuellmich does, that Covid-19 vaccines are not actually vaccines, are not effective at preventing serious symptoms of the disease, and are unsafe to use. All of these claims are false and have been repeatedly debunked by Africa Check and other fact-checking organisations.

All vaccines against Covid-19 have been found to be safe and effective in large-scale clinical trials. (See Africa Check’s factsheets on how drugs and vaccines are approved for use in South Africa, Nigeria and Kenya.)

Both clinical trials and subsequent real world studies have found that Covid-19 vaccines are not only safe, but effective at preventing serious illness and death.

Fuellmich also refers to “a PCR test plandemic”, a reference to a repeatedly debunked false claim that a common test used to diagnose Covid-19 is inaccurate. PCR – polymerase chain reaction – and other molecular tests reliably detect the presence of the virus that causes Covid-19.

Finally, Fuellmich claims that Covid-19 “can be treated with vitamin C, D, zinc, etcetera, and also with off-label use of Ivermectin and hydroxychloroquine”. Again, these claims have been repeatedly refuted by experts and public health organisations.

Ivermectin is an antiparasitic drug used to treat infection with parasites such as roundworm. The South African Health Products Regulatory Agency and US Food and Drug Administration have called for doctors not to use the drug as a Covid treatment, citing potential dangers and a lack of evidence of its effectiveness.

Hydroxychloroquine is used to treat malaria. The World Health Organization has said studies indicate that it “does not have clinical benefits in treating Covid-19”.