IN SHORT: South Africa's social security agency says its checks and balances make it impossible for people to scam the grant system in the way described in the blog. And there is no evidence of the scam.

It says Sassa makes nine types of grants available to citizens, foreigners and refugees. It adds that with the birth of just one baby in the country, foreign mothers can claim the R480 monthly child support grant.

The blog outlines how these “anchor babies” are used to cheat the Sassa grant system. Up to six adults were able to apply for a foster child grant for one child, it says, in addition to the child support grant. The same six adults also allegedly applied for a disability grant of R1,500 a month, despite not being disabled.

Many expressed disbelief at the so-called scam. “Bloody hell, no wonder the illegals don’t want to leave,” one commented. “Is there no end to the corruption and abuse of public funds?” asked another.

But did this really happen? 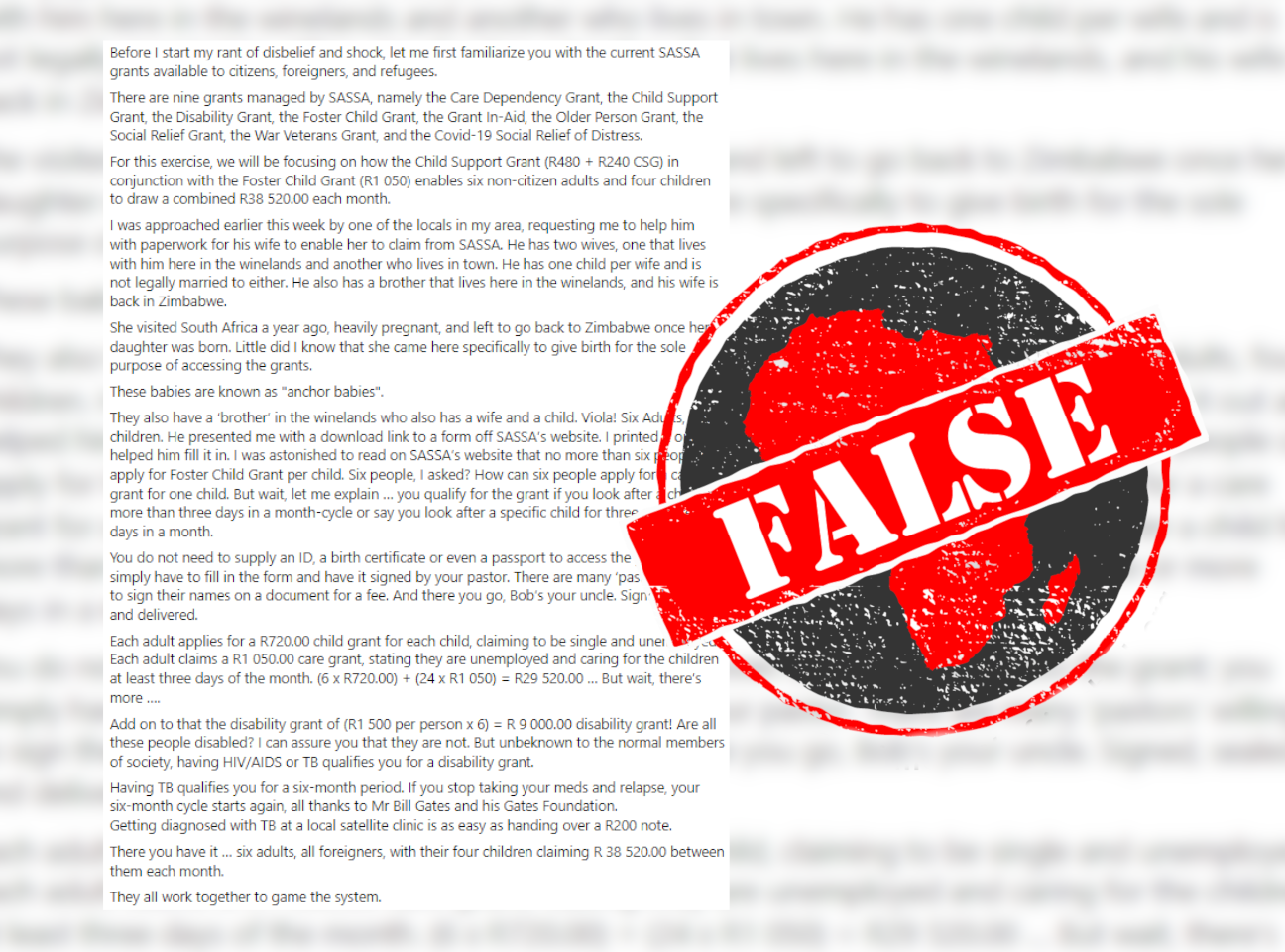 Sassa administers social grants to eligible beneficiaries. It currently offers nine types of grant, including the child support and foster child grants. But according to Sassa spokesperson Lumka Oliphant, it’s not possible to receive both of these together.

Requirements for each of these grants are set out clearly on Sassa’s website and include, for example, that both the applicant and the child live in South Africa.

The blog also claims that up to six people can apply for a foster child grant for a single child. This is possible, it says, because “you qualify for the grant if you look after a child for more than three days in a month-cycle”.

But this is also false. Oliphant told TimesLive that only one person could apply for a grant for up to a maximum of six children. And those children “must be in the full-time care of the caregiver who is claiming from Sassa”. Split caring arrangements were not allowed, she said.

Oliphant also explained that foster care grants were only paid out to those who had gone through the lengthy process of assessment and therefore had a valid foster care court order.

What about claims that the six adults obtained fake HIV/Aids or tuberculosis certificates to apply for the disability grant?

Oliphant said people receiving the R1,980 a month disability grant had medical conditions that lead to functional impairment. The grants are not based on medical conditions alone. And disability assessments were temporary, she said. Doctors carrying out the assessments are rotated regularly, meaning that if an applicant did receive the grant based on a fake disability, this would likely not continue for a prolonged period.

The scenario described in the blog was not possible, Oliphant told TimesLive. Sassa also posted a screenshot of the blog on its Twitter page, stamped “fake news”.

“Please be informed that the information in the article below is false and factually incorrect,” it said.