This translates as: “Forget ‘global warming’ – Southern Africa experiencing the coldest July ever with possible snow on Table Mountain.”

In other words, they “again serve as an example of global cooling, and at the same time strike another nail in the globalists’ ‘Global Warming’ propaganda”.

The article has been shared thousands of times on Facebook since it was first published in July 2021. But was the month Southern Africa’s coldest yet? And is the cold winter weather really evidence that the world is cooling, not warming? 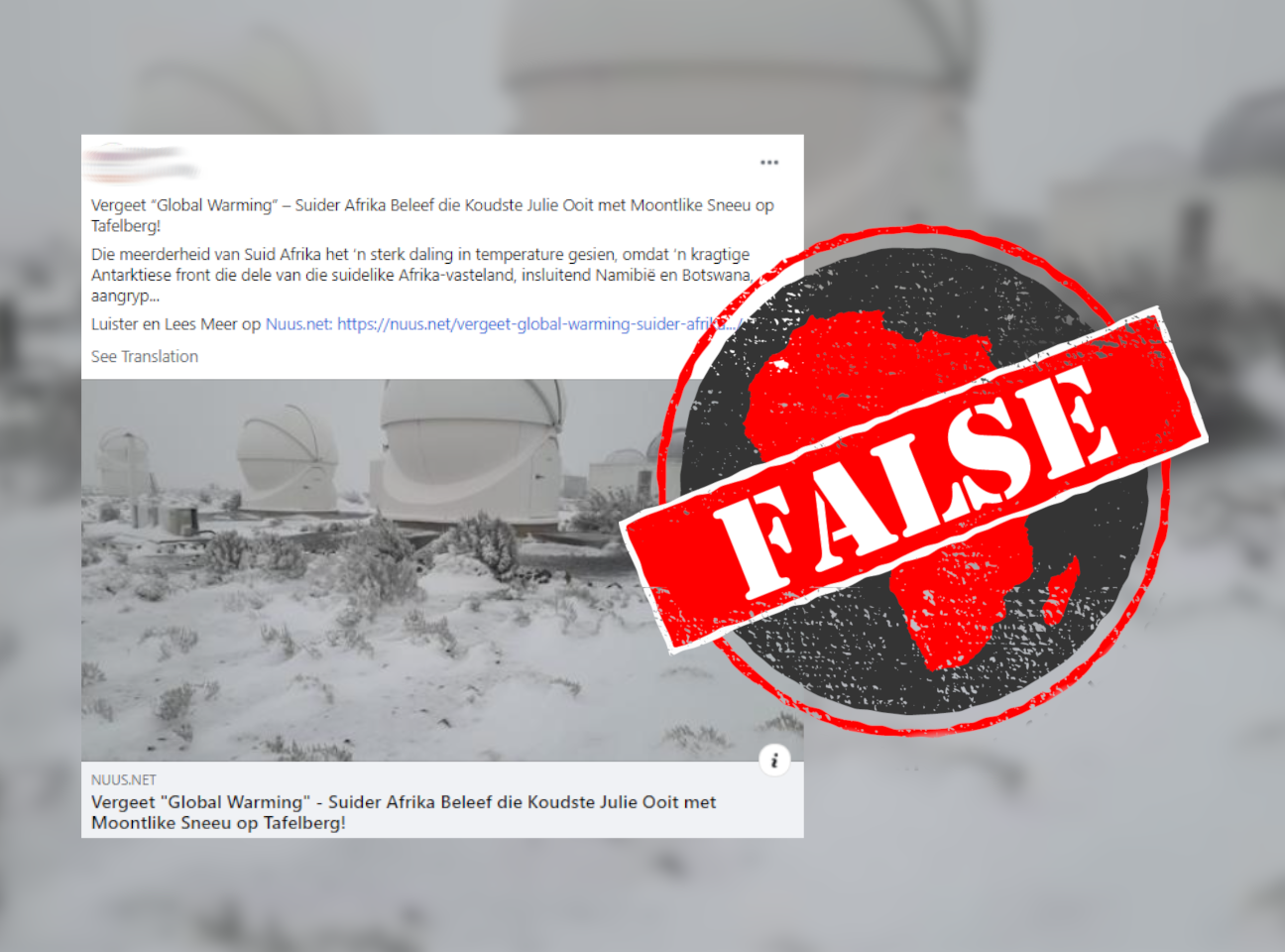 No evidence 2021 had ‘coldest July ever’

July 2021 in Southern Africa has been cold. The Gauteng Weather Service warned on Twitter that 22 July was likely to be Johannesburg’s coldest day on record since July 2011, when the South African city experienced an extremely rare snowfall.

And on 19 July the South African Weather Service warned that the country would see a “week of very cold temperatures” with cold fronts bringing “disruptive snowfalls” in some parts of the country.

But we could find no evidence that it was the “coldest July ever”.

The Nuus.net article provides no source for its claims. But it does list several places in Southern Africa that it claims had unprecedented low temperatures. These include a -7.7°C low recorded in Tsabong, Botswana on 15 July, as well as -6.2°C and -5.6°C recorded in two other areas of the country. It claims that these are all historic minimums for their areas.

The temperatures seem to have been sourced from the Twitter account “Extreme Temperatures Around The World” – @extremetemps – an account run by the climatologist Maximiliano Herrera. The account shares examples of recent extreme weather events – most of them extreme high temperatures across the world.

Herrera says on his website that his temperature information is compiled from weather stations across the world. But he does not give a detailed breakdown of historical temperatures in Southern Africa, or even the specific sources used.

Herrera’s tweet about Southern Africa’s mid-July cold front uses almost identical wording and figures as Nuus.net. But he does not say they were record all-time lows, even for July.

(2) Southern Africa Cold Spell: In #Botswana there was also harsh frost: -7.7C at Tsabong (it holds the national record low with -10.6C in July 1953),-6.2C at Werda and -5.6C at Tshane. Next update for South Africa:tomorrow. Watch a new intense cold wave is coming in few days ! pic.twitter.com/rjxIeQ0OOv

For example, in his tweet about the -7.7°C low recorded in Tsabong, Herrera says Tsabong holds the record for Botswana’s all-time low: -10.6°C in July 1953. Herrera does write that the -10.0°C recorded in Namibia on 15 July was the “lowest temp. in July for Namibia”, but adds that this is still to be confirmed.

He doesn’t say whether it’s the temperature or the record that is unconfirmed. Africa Check was unable to independently confirm the temperature from publicly available data.

But even if Nuus.net’s claims are accurate, this does not mean that July 2021 was Southern Africa’s coldest “ever”. The temperature across a region is not the same as the temperature in one place in that region.

In long-term climate studies, scientists don’t track a single temperature at a single point. Instead, they look at the average temperature over a large region. One such study over five decades shows a clear warming trend across Southern Africa.

Finally, the Nuus.net article was published on 20 July, long before the month was over. It doesn’t use average temperature data for the full month, and so simply can’t claim that July 2021 was Southern Africa’s “coldest ever”.

And the global climate is not cooling. In August 2021, the Intergovernmental Panel on Climate Change (IPCC), a United Nations body created to assess climate change science, released a landmark report detailing the evidence for and likely outcomes of global climate change.

In its 1,300 page summary of the scientific evidence, the IPCC report says: “Each of the last four decades has been successively warmer than any decade that preceded it since 1850.”

Climate change involves more than just warmer temperatures. Unusual weather events, such as a severe cold spell in many parts of North America in 2019, have been attributed to an increase in global temperatures.

The Nuus.net article’s claims about climate are false. But another claim, that evidence for climate change is “globalist propaganda”, is also cause for concern.

The Anti-Defamation League (ADL), an “anti-hate organisation” founded in 1913 to combat a wave of antisemitism and bigotry, says the term “globalist” is regularly used by antisemites as a coded term for Jewish people. Although the term “is not inherently antisemitic”, the ADL says, it has become used as an antisemitic slur.

The word “globalist” is often tied to antisemitic theories that a small group of Jewish elites are in control of global media, industry, and governments around the world.