IN SHORT: In a mishmash of old clips and badly dubbed audio, Uhuru Kenyatta appears to apologise to William Ruto. The two had a famous falling out, but the TikTok video is doctored and doesn’t show them reforging their alliance.

On 5 September 2022, Kenya’s supreme court upheld the election of William Ruto as president. It had been challenged by Raila Odinga, who narrowly lost the vote by 48.85% to Ruto’s 50.49%.

Odinga’s bid for the presidency was supported by Uhuru Kenyatta, who Ruto replaced as president. Ruto was Kenyatta’s deputy, but the two later fell out.

The day before the court’s decision, a clip was posted on the video sharing site TikTok. It appears to show Kenyatta apologising to Ruto and restoring their alliance. The clip has been viewed more than 163,000 times so far.

It begins with Kenyatta walking a red carpet outside State House, the presidential residence. It then shows him speaking to an audience.

He says: “I want to invite my brother William to come to the stage. Karibu! [Welcome!] Don’t worry, we are not singing today. You don’t have to worry.” Kenyatta chuckles, and the video cuts to Ruto, also laughing.

The same clip of Kenyatta speaking then repeats, but the audio is different.

“We have campaigned against one another. We have said nasty things about each other. We have hurt one another… I ask for your forgiveness,” he is heard saying. Further footage shows various scenes of Kenyatta and Ruto smiling and laughing together.

In the 2022 campaign, Kenyatta criticised Ruto and labelled him “a thief”.

But does the video really show Kenyatta congratulating Ruto and asking for his forgiveness? We checked. 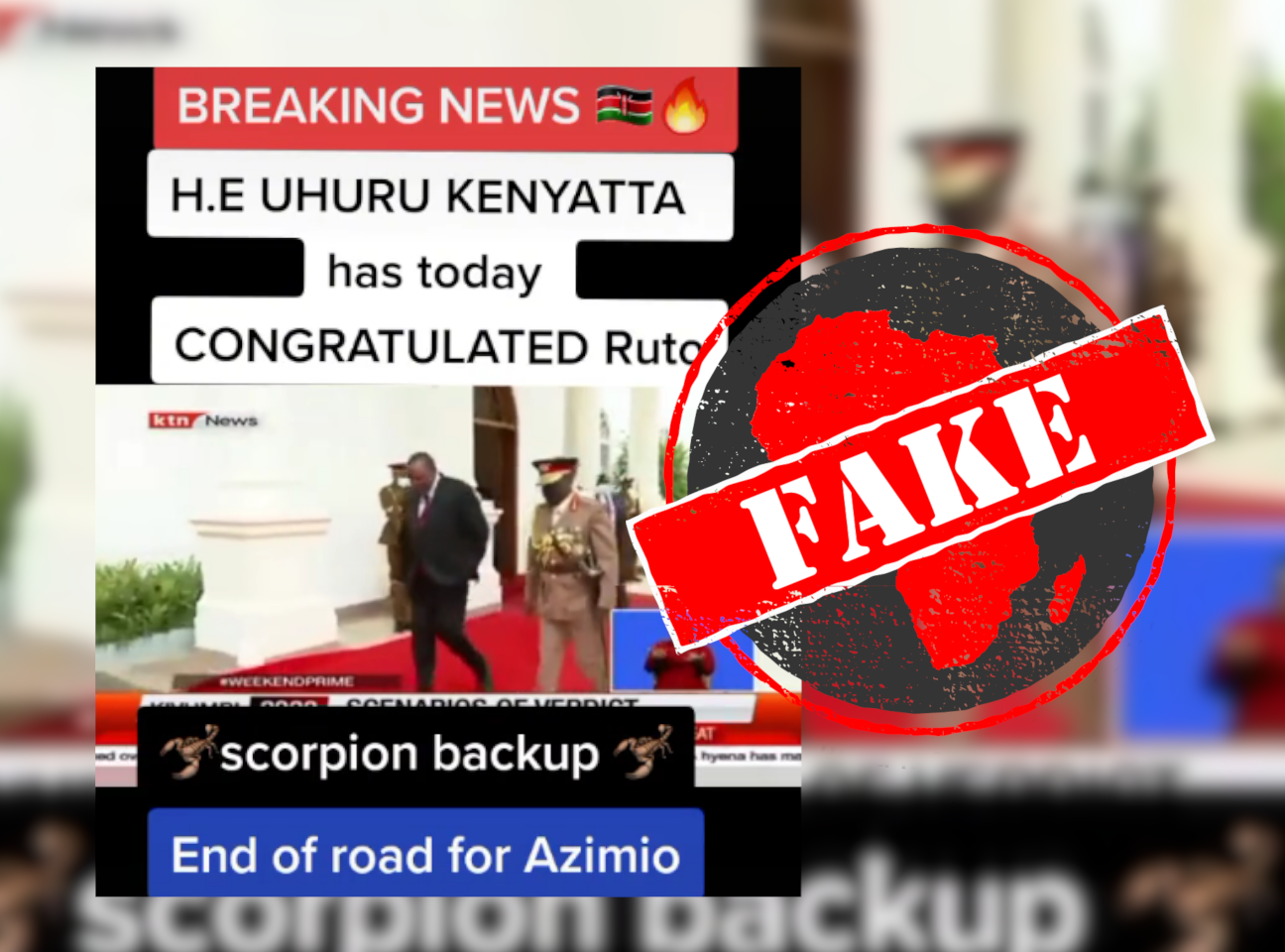 The video is put together from three separate clips. The first has the logo of KTN News, a Kenyan TV station. The second clip has the logo of another local station, Citizen TV. The third has the watermark of the YouTube channel Kenya News Media.

We looked through the Citizen TV YouTube page for videos of Kenyatta and Ruto, and found this video posted on 31 May 2018. It was shot during that year’s national prayer breakfast. Kenyatta invited Ruto to the podium, and then invited Odinga and former vice president Kalonzo Musyoka.

In the video Kenyatta is seen addressing Odinga, and asking for his forgiveness. It is this audio that has been edited and inserted in the video claiming that Kenyatta congratulated and apologised to Ruto.

Odinga and Kenyatta had been arch-rivals for years. But in 2018 they became allies in the now-famous handshake deal.

At no point in the TikTok video does Kenyatta congratulate Ruto for his presidential win. And there’s no public record of Kenyatta recently apologising to Ruto.

Kenyatta did congratulate his former deputy after the supreme court upheld the election results. But the video was posted the day before the ruling, and doesn’t show the actual congratulation.